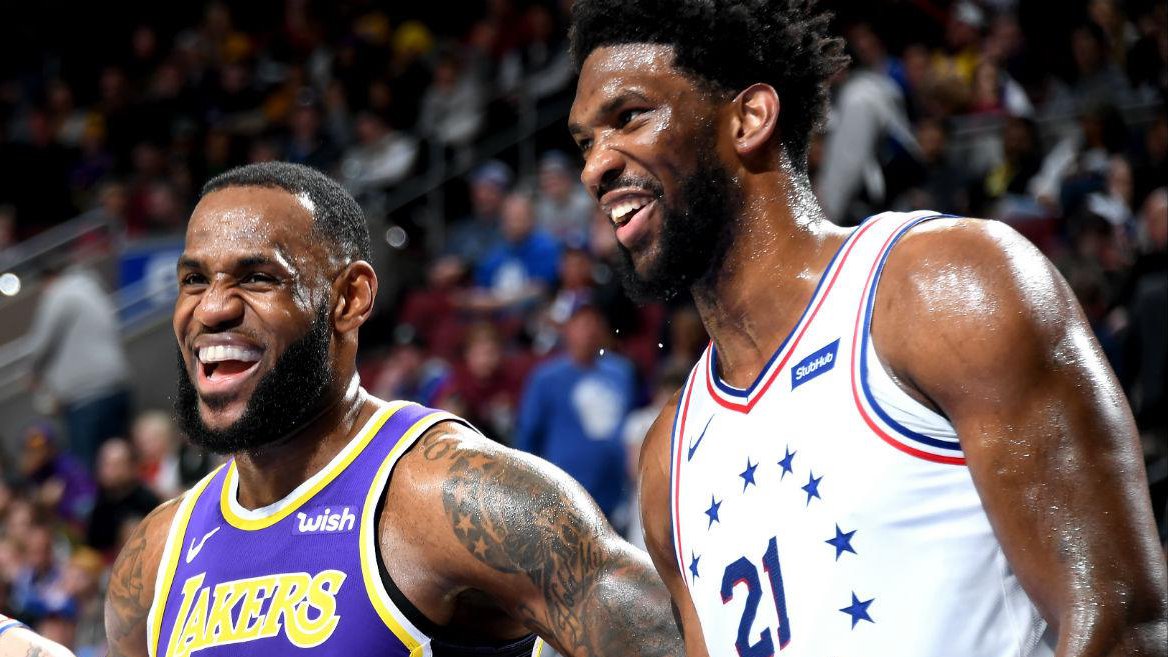 The Philadelphia 76ers begin a three-game road trip on Wednesday with a clash against the Los Angeles Lakers. Although both teams are heading in different directions in their respective conference, they do have one thing in common: Joel Embiid and LeBron James playing at an MVP level.

The 76ers would not be where they are today had it not been for Embiid’s play this season. The 28-year-old is averaging a career-high 29.8 points in 58 games while also putting up 11.3 rebounds and 4.3 assists. According to FanDuel Sportsbook, he’s currently the -165 favorite to win the 2021-22 NBA MVP award.

On the other hand, LeBron is also doing some mind-blowing things this year. Despite the Lakers’ lack of success, the ‘King’ is pacing the league at a 30.0 PPG rate.

Beyond that, he’s also averaging 8.2 rebounds and 6.3 assists, showing that he has no intention of slowing down at the age of 37. Had Los Angeles been higher in the standings, he’d likely be in the MVP conversation, too.

Nevertheless, both players have brought a lot of enjoyment to bettors recently when it comes to player props. Here’s a look at Embiid and LeBron’s player prop value ahead of Wednesday’s 76ers vs Lakers matchup.

As mentioned before, Embiid has given the league every reason to be this season’s NBA MVP. Although, while his play throughout the course of the year has been fantastic, he’s been heating up even more as of late.

Oh, yeah: there’s also the fact that he’s accomplished the above while dealing with a back injury that held him out of Monday’s game against the Miami Heat, which the 76ers were able to win without him.

When it comes to his scoring props, there’s good reason for Embiid to have offensive success against the Lakers on Wednesday. On one hand, Los Angeles has the fifth-worst scoring defense this season, giving up 114.1 PPG.

Additionally, the Lakers also give up the 15th-most points to centers, which is further amplified by the fact that Anthony Davis is still sidelined. With Dwight Howard being past his prime, Los Angeles has few options to contain Embiid.

It’s also a good idea to keep your eye on Embiid’s rebounding props. Opponents have been having a field day when it comes to collecting boards against the Lakers, proven by them allowing the fourth-most rebounds per game.

Considering how Embiid has finished with at least 12 rebounds in six of his last eight games, things are looking promising ahead of Wednesday’s clash.

Just like NFL fans with Tom Brady, NBA fans keep wondering when — or, better yet, if — LeBron James is ever going to fall off. Despite playing in his 19th season, the ageless wonder continues to dazzle fans as one of the sports’ best.

While it’s already impressive enough that LeBron is the league’s scoring leader at 37, he’s actually playing even better lately. He’s averaged 32.8 PTS/9.2 REB/5.7 AST on .528/.356/.784 shooting in the 13 games he’s played since Anthony Davis was sidelined.

LeBron’s recent play becomes even more impressive when you take into account that he’s had two 50-plus point performances over that stretch, as well as at least 36 points in each of his last three games ahead of the matchup against the 76ers.

Building off that, LeBron will continue seeing the brunt of offensive opportunities due to Davis’ absence and Russell Westbrook’s inconsistent play. The latter has looked better lately, but not good enough to take away any opportunities from the four-time NBA Champion.

Taking that into account, LeBron is a pretty surefire option when it comes to scoring props. Even though the 76ers are a solid defensive team, ‘King James’ is on a mission to ensure that the Lakers get into the playoffs. When LeBron is focused on carrying a team, few obstacles can slow him down.

The 76ers are also an average rebounding team on the road, so opportunities will be there for LeBron to collect boards. Even if the Lakers have their own rebounding issues, they’re still a top-13 team when it comes to RPG and a lot of that has had to do with his success around the glass.

Even with Embiid guarding the paint, opportunities should be there for LeBron to extend his streak of nine-plus rebounds to four consecutive games.

Beyond that, it’s a bit tough to recommend any assist props. While LeBron could end up with double-digit assist totals on any given night, he’s finished with six or fewer in nine of his last 12 games.

Nevertheless, LeBron is still one of the best players in the world towards the end of his career, making a showdown between him and Embiid must-watch television.

The 2022 French Open is underway at Stade Roland Garros in Paris, France, and we are already almost through the first week of play. Tomorrow, the remaining third-round matches will take place, after which the men’s and women’s singles draws will be down to their final 16 contenders. In both men’s and women’s singles, there END_OF_DOCUMENT_TOKEN_TO_BE_REPLACED