No KD, No Cousins, and No Jumper For Danny Green—No Problems? 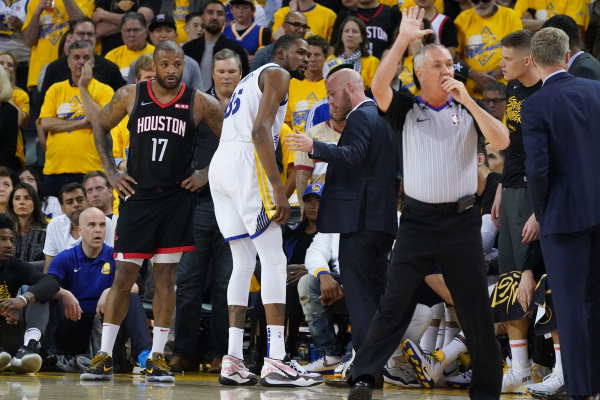 With injuries to key players on the Golden State Warriors and the Toronto Raptors’ Danny Green in a slump, will these subplots influence the outcome of the 2019 NBA Finals?

Wagering on sports is all about information, amongst a few other factors. Injuries are one of the most impactful variables that can sway whether a game is a lock for one side, or if bettors should be shredding their tickets early on. For the 2019 NBA Finals, a major storyline is in play regarding the Toronto Raptors and Golden State Warriors.

While the Warriors have cruised to a respectable 57-win season, it has come with a cost now that they have the NBA Finals for the fifth consecutive time. Losing both Kevin Durant and new acquisition DeMarcus Cousins to injuries, the Warriors will now rely on their pre-KD tandem of Steph Curry and Klay Thompson to fulfill the scoring load.

Despite the injuries, the Warriors’ series price opened up at -275 and jumped as high as the low 300s after early money pushed the already-favored Dubs even higher. While the Raptors are dogs, they are missing another key cog, not to injury, but rather, due to a horrific slump.

Danny Green has made his reputation as a role player and lights-out shooter from behind the three-point line, but as of late, he’s been as far and away from his reputation as you could get. Despite shooting upwards of 45 percent in the regular season, he shot 15 percent from behind the arc during the Raptors’ Eastern Conference Finals victory over the Milwaukee Bucks in six games.

Are Warriors bettors overpaying for a depleted team or getting a great price? Are Raptors bettors burning money on a dead dog, or are they investing in an undervalued threat? Will a potential hot streak from Danny Green behind the arc be what Toronto needs to overcome Golden State’s unstoppable deep-threat shooting?

It’s hard to quantify what a player like Kevin Durant means for a team like the Golden State Warriors, especially for those in a living of making lines. But oddsmakers had an idea—in several games against the Houston Rockets these playoffs, the Warriors were underdogs of 5.5 points on the road.

Losing KD pushed the spread as high as 7.5 points, essentially deeming KD a two-point factor, or one basket. Some could argue that the loss of KD means less isolation basketball and more movement, and therefore, more long-range shots from the likes of Curry and Thompson.

Final Take: The loss of KD shouldn’t scare you if you like the idea of betting the Warriors. If you think they win Game 1 on the road, snag that line quickly. If they open with a win, a massive price change will almost price them out of having any value as far as series bets are concerned.

While Cousins has been out for almost the entire playoffs, his loss is still apparent. The Warriors have spotted his absence with considerable playing time, and with back-up pivots like Kevon Looney playing outstanding basketball, bettors shouldn’t even blink an eye with him being gone if they like either side.

Final Take: Cousins’ absence shouldn’t influence betting decisions. While there are rumors he may return, if they haven’t brought him back yet, don’t count on him making a surprise return.

You might think the inclusion of Green is impertinent, but he’s been absent on both ends of the floor. Green has had amazing Finals performances for the San Antonio Spurs in his battles against the Miami Heat. While he is in a bad slump, he is poised for a major return to form against the Warriors. He may be one of the biggest pieces of hidden value for a Raptors team which is capable of matching Golden State three-for-three.

Final Take: Despite being a pricey dog, don’t let it scare you from betting Toronto. If Green can get it going, it will take a major load off of Kawhi Leonard’s back and open up the lanes for other players on the team. If he’s able to get into a groove, it makes Toronto a very scary team with lethal long-range shooting.