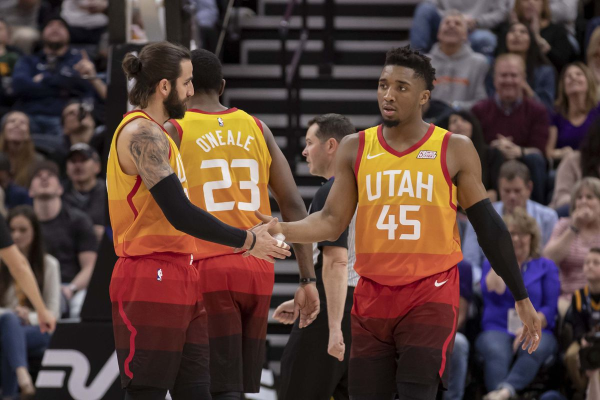 The UtahJazz are in Houston to take on the Rockets and James Harden tonight at 9:30 EST on TNT. These two teams have split the season series 2-2 with the Jazz winning the first two games and the Rockets took the final two with both teams winning one at home and one on the road.

I think if we want to talk about these 4 games, I think it is really important to talk about who was actually on the court in those 4 games because both teams have dealt with their fair share of injuries. Chris Paul missed both the first and fourth game due to suspension and then injury, but the results really never changed much throughout the series. One interesting thing to note is that Harden, Paul, and Capela have all had close to ceiling games vs. the Jazz, which is not really common. The Jazz have been really healthy against the Rockets this season, but we have seen the Jazz start Jae Crowder over Derrick Favors 3 times. I believe that it is very possible that we see Crowder start over Favors today so the Jazz can match up with the smaller P.J. Tucker at the 4.

The Rockets and the Jazz have both been outstanding in the last few months in terms of efficiency and I think a lot of that has to due with the health of the Rockets and the schedule of the Jazz. I thought the Jazz were going to be much better defensively this year than they were for the first 3-4 months of the season. However, they have really stepped up recently and played much better defensively. I think that this team is meshing more on both sides of the ball, but that has also been compounded by their schedule in recent months. The Jazz have played one of the easiest schedules in the NBA since February and that does make me worry that the change in defensive efficiency has more to do with opponents than it does the Jazz themselves. The only reason for me to hang on to this improvement is that I think they should have been this good all along, which makes it a little easier to believe.

The Rockets missed both Chris Paul and Chris Capela for extended periods of time and that has really changed the complexion of the team multiple times. With Paul and Capela, they are a team with three different options and a bunch of shooters to surround the 2 guys with the ball in their hand. Once Paul goes out, this becomes the James Harden and Clint Capela pick and roll show for the majority of the game. Harden scores or assists on 80% of Houston’s possessions but the really don’t become much worse statistically. Once Capela was out, we saw a historic stretch of play from Harden who decided to score 50 points every other game. Now the Rockets are really healthy and they are still trying to find their way back to a happy medium between MVP James Harden and the Rockets operating as a team. There are signs that this is really close to being figured out with Clint Capela’s recent play, but I think this team will definitely be better in two weeks than they will be now.

The Rockets are -6.5 point favorites in this game and I think that line is incredibly fair to both teams. At the end of the day, I worry about the Jazz being able to go shot for shot with Houston down the stretch and that is obviously a major concern. That being said, I like the Jazz to hang around in this game and keep it really close down the stretch. I trust the Rockets to score more often when they need a bucket, but the +6.5 in favor of the Jazz is enough to get me on Utah in game 1.