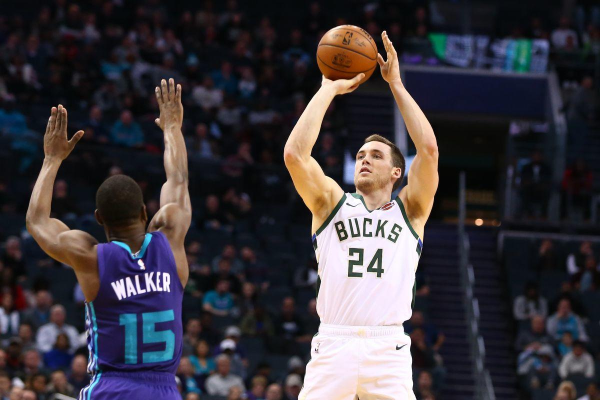 Two of the best teams in the NBA will take the floor on Friday when the Golden State Warriors (17-9) travel to Fiserv Forum to take on the Milwaukee Bucks (16-7). For the Warriors, they currently sit in 4th place in the Western Conference, but 1st through 4th place are only separated by a single game. This will be the last game of a 5-game road trip that has seen them go 2-2 including a win over the Cavaliers, 129 – 105, on Wednesday. For the Bucks, they currently sit in 2nd place in the Eastern Conference, 3.5 games behind the surging Toronto Raptors. The Bucks are coming off a 115-92 win over the Detroit Pistons on Wednesday night. The Warriors and Bucks will square off Friday with a scheduled 9:30 pm ET tipoff.

The MilwaukeeBucks come into this game as 1.5-point favorites playing at home. The over/under for total points scored comes in at 239.5.

These two teams rank 1st and 2nd when it comes to adjusted offensive rating (estimate of points scored per 100 possessions taking strength of opponents defense into account). The Warriors rank 1st at 116.19 points while the Bucks are 2nd at 116.07 points. On the defensive side, the Bucks certainly have the edge. In terms of adjusted defensive rating, the Bucks rank 6th in the NBA at 105.78 points while the Warriors ranks 19th, giving up an average of 111.36.

Starting to get healthy again, the Warriors are looking to build off their 2-game winning streak Friday night. Leading the way for the Warriors is Kevin Durant. On the season he is averaging 29.8 points, 7.8 rebounds, and 6.3 assists. Particularly with StephCurry having to miss over 10 games thus far, Durant has definitely put the team on his back. Speaking of Curry, he actually is averaging more points than Durant, albeit in 11 fewer games. On the season, he is averaging 30.2 points on 51.9% shooting from the field and 50.3% shooting from behind the three. He is also averaging 5.1 rebounds and 5.7 assists.

Even though Durant and Curry are the superstars of the team, their depth still has them loaded. KlayThompson has the ability to go off on any night and is averaging 22.7 points and 4.1 rebounds. In addition to him, Draymond Green (6.9 points, 7.5 rebounds, 7.2 assists), Quinn Cook (9.5 points) and Jonas Jerebko (7.2 points, 5.5 rebounds) have all been contributors.

Milwaukee Hoping To Make Up Ground On Raptors

Hard To Pick Against Champs When Spotted Points

I certainly know that the Warriors have shown weak spots in their armor this year. Whether it is health issues or issues between players, they have not quite clicked like in years past. Still, they are 17-9 and have two, if not three, of the best scorers in the NBA. Antetokounmpo is going to make life tough on them, but I will take my chances, and put my money, on the defending champions when they are playing the role of the underdog and, thus, getting spotted 1.5 points. Take the Warriors.

Tonight’s NBA betting schedule is lacking in overly compelling matchups, but tonight’s action will also be taking place with a few notable names missing. Booker, Morant, and Lillard Sidelined Tonight and Beyond Booker Out Versus Pistons Due to Hamstring Injury The Phoenix Suns lost Devin Booker (hamstring) on Tuesday against Golden State but closed out END_OF_DOCUMENT_TOKEN_TO_BE_REPLACED