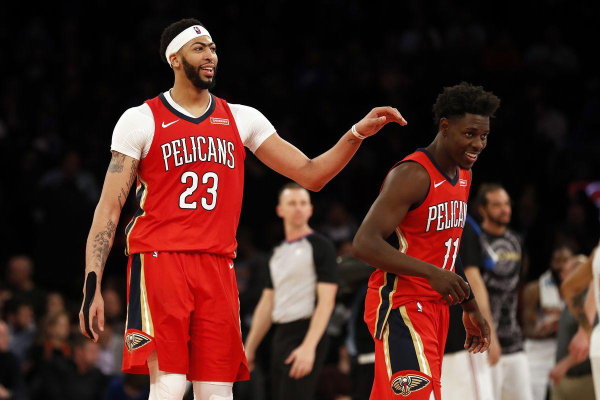 The Washington Wizards head to the Smoothie King Center to take on the New Orleans Pelicans in a matchup that took place just Saturday night. In that game, the Wizards took a 10 point victory away in the absence of Anthony Davis. Now, AD appears to be back to full health and the Pelicans are back at home.

Pelicans On A Rollercoaster

The Pelicans have been a very up and down team to start the year. They have clearly missed Elfrid Payton more than most people would have thought. With Elf, they are undefeated this year, but his 2 injuries have held him out more than half of this season. With Elf out, the Pelicans dynamic really does change.

The Pelicans start a 3 guard lineup with Etwuan Moore starting at the 3 when they are healthy. This allows the bigs to play at their normal position and allows Jrue Holiday to become a score-first shooting guard. Now, they have to run the offense with Jrue, and they insert Wesley Johnson and Darius Miller into the lineup more often. This bumps Jrue’s numbers but hurts the team as they have one less facilitator and one more guy on the court that basically just sits in the corner on offense. They also ask Moore to produce more than he is used to and when he doesn’t, they tend to struggle. They have also had Anthony Davis struggle with some bumps and bruises. SHOCKER. If you have time, I suggest you look up different injury diagnoses AD has had since coming into the league. He’s short-term injury prone like no one we have ever seen.

As I mentioned before, The Pels were without Anthony Davis in this matchup on Saturday. If you look at the box score without the names, you would barely know. Julius Randle put up 29 points, 15 rebounds, and 7 assists in one of the best statistical games of his career. They got ZERO bench production. With all three bigs, the Pelicans often get over 60 points a game and this was not the case Saturday. Although Randle was able to step up, the box score would lead you to believe that the Pelicans really missed the Julius Randle role when he stepped up to fill AD’s role.

The Wizards have had probably the second craziest season in the NBA and it’s attempting to quickly move up on the Timberwolves for that #1 spot. We saw the Wizards start out 2-9. Then they started playing John Wall and Bradley Beal 40+ minutes a night because they were doing everything they possibly could to win games. The 12th game of the season had playoff-like rotations, which was a crazy thing to see. A few weeks pass and we start to hear reports about turmoil at Wizards’ practice. Bradley Beal complaining, John Wall yelling at the coach, “Everyone on the Wizards is on the table,” a new Dwight Howard controversy, you know- the usual NBA team breakdown.

Recently, I have been impressed with the Wizards resiliency. They have been blown out very early in games only to come back and actually win those games. They have stopped playing game 7 rotations and now play game 3 rotations as if they were up 2-0. There is a reason to believe that they may have turned some type of corner, but I still don’t think this is “over.” The Wizards defense is atrocious, especially inside. Their starting center is Thomas Bryant and he plays about 18 minutes a night since being inserted into the lineup. They would like to run Markieff Morris or Jeff Green at the 5. That is not going to work against this Pelicans team dominated by frontcourt scoring.

I Said before that the biggest thing missing from this game on Saturday was the Pelicans bench scorer. If Julius Randle and Nikola Mirotic put up 53 vs. the Wizards, what will those 2 and Anthony Davis do? I think this Pelicans front court just overpowers the Wizards most of this game. At home, I will take the Pelicans (-5.5).