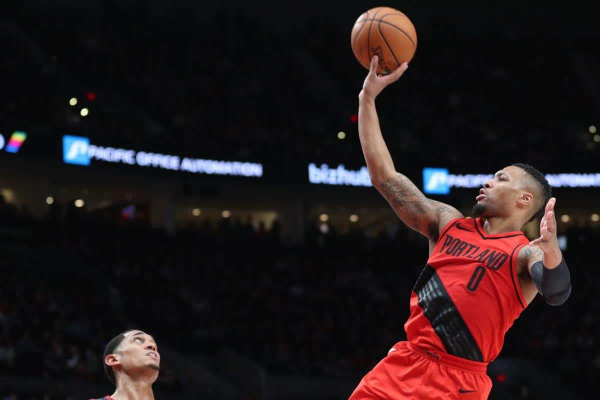 Damian Lillard and the Portland Trail Blazers head to Oklahoma City to take on the Thunder in a matchup of top Western Conference foes. These teams have met once this season in early January, where the Thunder won 111-109 in Portland. I think that this game and the total are likely to be compared that game in Portland. That is why we see a -5 spread in favor of the Thunder and an over/under of 227. Both teams shot below average in that game, which is why the total is slightly higher than the previous result.

Repeat of Past Meeting?

The previous meeting tells a lot of stories that I think are indicative of the better side in this game. Both teams should have basically the same rotation in this game without injuries. There was also virtually no foul trouble in the last game either. These very similar games can often allow us to analyze potential regression in shooting stats. Shooting varies a ton from game to game, so analyzing which team will shoot better than the last time is really the biggest edge in this game.

The last game was very even throughout, and I believe that these are two of the most even teams in the NBA. They both have a dynamic scoring duo and a good center with 2 starters that are simply role players on a star-heavy team. Comparing Westbrook, George, and Adams to Lillard, McCollum, and Nurkic isn’t really necessary, but I think that they are similar enough to consider them relatively close to equal. In the previous game, Damian Lillard shot 1-8 from the 3-pt line, and the team as a whole shot 29% from the 3-pt line. This is not common for this team, and I expect them to shoot better in this game. Just one more shot in the previous game makes the Blazers a winner, and I think that changes the line here from -5.5 to -4 or even less.

The Thunder shot relatively poorly as well, but they are worse than the Trail Blazers are, coming in at 27th in the NBA compared to the Blazers 8th. The biggest note about the Thunder side of this game is that Russell Westbrook shot 0-2 from three in this game. We saw a less talented Lakers team force Russ to take 3-pt shots and force him to pass within the arc. If the Blazers can implement this proven strategy after seeing someone else do it, I believe that Russell Westbrook’s 31 points on 28 shots may not be what he puts up tonight. I also do not think the Thunder can hold McCollum to 10 points again. McCollum is averaging 20.5 points per game this season. You cannot expect the Thunder to consistently keep him at 10 points.

The Trail Blazers bench was much better in this game, but what did you expect? The Thunder have one of the worst benches in the league, and I believe that their second best bench piece doesn’t play enough. Nerlens Noel is a productive NBA player when he is healthy and on the court. The Thunder do not believe that Noel and Adams can coexist on the court, which I believe hurts their overall bench production. I expect the Thunder bench to be outplayed once again because that is what should happen. When we can identify reasons for the outcome to be different than the first result, that is such a nice edge but sometimes what happens is what was supposed to happen.

I think this game is incredibly close, but the line just gives too much value to the Blazers. I think the Blazers are very live in this game, so I have to take the 5.5 points and the road team. I also like the moneyline for the Blazers here.