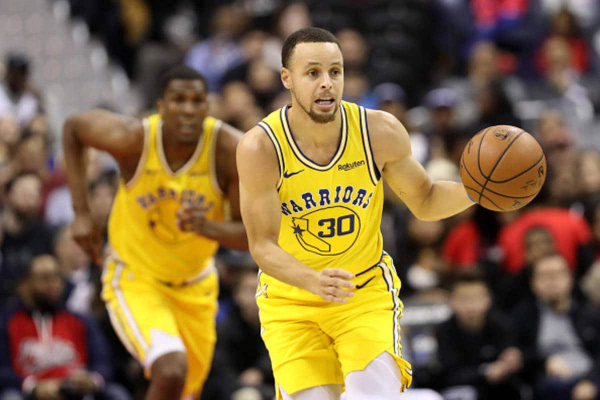 The Golden State Warriors are headed to Portland to take on Damian Lillard and the Trail Blazers on ESPN tonight at 9:30 EST. The Warriors are resting DeMarcus Cousins and Shaun Livingston for this game leading into the All-Star Game after a back-to-back. Cousins saw 28 minutes last night in Utah, so there will be a rather large void in the rotation without him and Damian Jones. I expect Kevon Looney to pick up the start and see rather significant run in this game. Looney has really improved his game and he had a few big games right before Cousins returned to the lineup, so it will be interesting to see if he can continues that stretch. Klay Thompson left last night’s game with a strained finger but eventually returned and shot 9-14 in the game. He is supposed to be good to go in this game, but it is possible that changes before game time. The TrailBlazers are very healthy and should be at full-strength in this game.

These teams have played 3 times this season, so we do have a lot of data to go off of in this spot. The Warriors lead the season series at 2-1, with the one loss coming in Golden State. None of these games came with DeMarcus Cousins in the lineup, so the data shouldn’t change too much. The last game in between these two teams is what I think is likely to be the most telling. We saw the exact same starting lineups that we will see tonight and it was a close game throughout in Portland. In that game, we saw both Jusuf Nurkic and DamianLillard have big games, which is really to be expected. Earlier in the season, we saw Nurkic get run off of the court in a lot of games. Since December, we have seen Terry Stotts realize that Nurkic vs. a fast-paced team is only an advantage. Nurkic is skilled and a really big guy, which allows him to feast on smaller frontcourts like the Warriors tonight. In the last meeting, he posted 21/10/7 in 32 minutes. I expect to see Nurkic have another big game vs. the likes of Looney and Jerebko down low.

Short in the Paint

The loss of Cousins will really affect how much usage these Golden State guys see in this game. Before Cousins arrived, we saw Steph Curry put up monster performances most nights because he had the ball more often. Now, if any of thee guys got hot, they still received the ball as much as they wanted, but they got less touches and shots to get hot in the first place and I think the most affected by that was Stephen Curry. I believe the best matchup for the Warriors is Steph Curry vs. Dame, so I am curious if we see Steph come out aggressive early.

The Warriors are favored in Portland by 3 points, which is, I think is very fair to both teams. The Warriors are the better team, but Portland is a phenomenal home team at 23-8 on the season and they are still clearly a playoff team. I think this game will likely come down to the Blazers getting a third key producer. Recently, the Blazers added Rodney Hood and have used Jake Layman a lot more as a shooter off the bench. I think one of those guys or a third starter need to have a game that is better than expected. Obviously, C.J. McCollum is the favorite to do that, but he gets a relatively difficult matchup with Klay Thompson compared to his counterpart Damian Lillard. I think banking on more than 2 of these guys to exceed their averages is asking too much, so give me the Warriors -3 on the road.