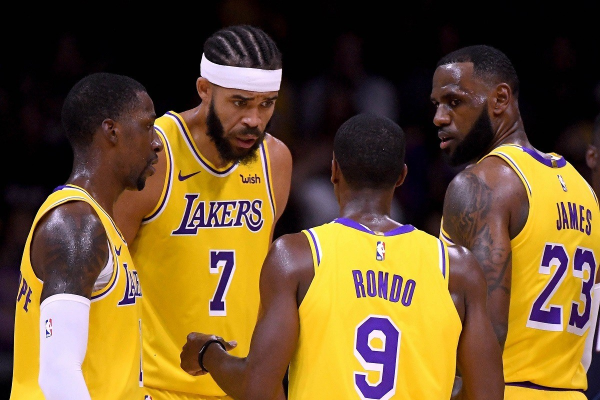 Wednesday night will feature a matchup of 4-win teams when the Minnesota Timberwolves (4-7) travel to the Staples Center to take on the Los Angeles Lakers (4-6).  For the Timberwolves, it might be about time to trade Jimmy Butler for whatever you can get. The disgruntled star has made it very clear that he doesn’t plan to play if he doesn’t feel healthy and his negativity seems to be bringing the team down as they have lost their last three games including a 120-109 loss on Monday.  While he did play in that game Monday, it just seems like you can never tell game to game whether he is going to suit up or not. For the Lakers, while Lebron probably hoped for a better start to the season, there have been signs of life. They have won two of their last three games, although they did get blown out by 14 against the Raptors on Sunday.  Still, the two teams will square off on Wednesday with tip off scheduled for 10:30 pm ET.

The opening line featured the Lakers as 5-point favorites at home in this one.  The opening moneyline was set at the Lakers -213 and the Timberwolves +179.

According to basketball-reference, the Los Angeles Lakers currently rank 9th in adjusted offensive rating (estimate of points scored per 100 possessions adjusted for strength of opponents defense) at 112.22 points while the Timberwolves rank 16th at 109.56 points.  In terms of adjusted defensive rating, the Lakers rank 20that 112.45 points while the Timberwolves rank 24that 113.77 points.  What this means is that it might end up being more of a high scoring affair, with both teams relatively average on offense while pretty low on defensive metrics.

Ever since Jimmy Butler requested a trade, everyone around the Timberwolves just seems to be on edge.  For a team trying to compete in the Western Conference, this is not what Minnesota was hoping for. Statistically, though, they would love to see Butler come around to the idea of sticking it out, and playing hard, for the Timberwolves.  In 8 games this season, he is averaging a team-high 22 points with 4.9 rebounds, 3.8 assists and 2.4 steals.

Aside from Butler, there have been several other players who have been producing.  In fact, they have six players who are averaging double-digit scoring in the games they have played.  Karl-Anthony Towns (18.8 points, 10.3 rebounds) and Derrick Rose (17.4 points, 3.5 rebounds, 4.6 assists) have been especially productive. Additionally, Taj Gibson (10.7 points, 6.6 rebounds), Jeff Teague (12.7 points, 6.9 assists) and Andrew Wiggins (16.8 points, 3.6 rebounds) have also had decent starts to the season.

For years, Lebron always seemed to have to carry most of the weight in Cleveland with little help around him. Unfortunately for Lebron, much of the same is going on in Los Angeles, but unlike with Cleveland, the Western Conference is brutally tough.  On the season, Lebron is averaging 26.8 points, 7.6 rebounds and 7.7 assists per game. Despite the solid numbers, the Lakers still sit in 4th in the Pacific Division, only leading the Suns, who are 2-8.

While these are professional athletes who get paid a lot of money for their craft, there is still something to be said about team chemistry.  For the sake of the organization, Jimmy Butler probably needs to go at this point because the Timberwolves just haven’t been able to get on track due to the distractions.  Unfortunately for Minnesota, I see this continuing on Wednesday. Especially playing in Los Angeles, I think the Lakers are going to win their third game in the last four and probably win this one pretty easily, definitely surpassing the 5-point spread.  For my money, I am taking the Lakers at -5.