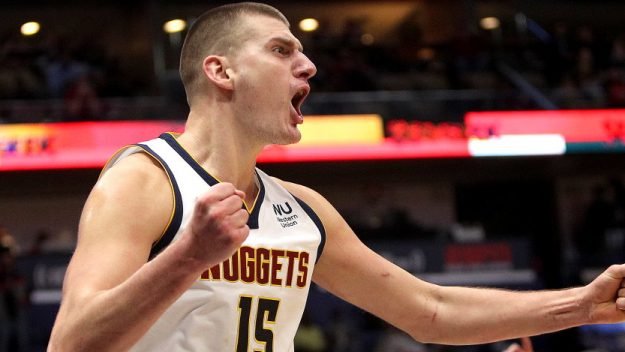 The 2021-22 NBA Playoffs continue on Wednesday, April 21 with some exciting matchups, including Game 3 of the Golden State Warriors vs. Denver Nuggets series.

The Warriors dominated the Nuggets for the second straight game on Monday, defeating them 126-106 to take the 2-0 series lead. The entire Golden State lineup looked like money, especially Stephen Curry, who came off the bench to score 34 points.

Fortunately, the Nuggets get to turn back to Ball Arena in hopes of shifting the momentum in the series. After all, another loss would put them in a position to get swept in Game 4 on Sunday.

Will the Warriors put the nail in their opponent’s coffin? Or will the Nuggets trim the deficit to 2-1 with a victory?

The big difference between the Warriors now compared to the regular season is the fact that all of their star players are relatively healthy and thriving.

Curry still isn’t 100%, which has led to him coming off the bench in both games to begin the series. It’s worked so far, proven by him recording 34 points on .706/.500/.714 shooting, along with a team-high plus-32 plus/minus rating, in just under 23 minutes of playing time.

Meanwhile, Klay Thompson also contributed with a modest 21 points in 35 minutes of playing time. His field-goal percentage and playing time did increase from Game 1, though, making him an interesting player to keep an eye on in Game 3.

If there is one area the Warriors could improve in, it’s rebounding. Although they were a top-10 rebounding team in the regular season, they were out-rebounded, 47-35, in Game 2. If Golden State wants to close out this series, the team must improve at collecting boards.

Nuggets Must Learn to Play with Lead

The Nuggets made the same mistake early on in both games to begin the series and that’s not properly playing with a lead.

In both games, the Nuggets exited the first quarter with a one-point lead. Even though that isn’t the biggest difference in score, the best teams will capitalize even on the smallest differentials.

Fast forward to the final three quarters of both games and the Nuggets easily handed control over to the Warriors, putting them in the 2-0 hole they’re in now.

In order to avoid history repeating itself, Denver needs its top players to create a lead and then lock it down.

For example, Nikola Jokic has been playing below his MVP-like standards. While the 25.5 points, 10.5 rebounds and 5.0 assists he’s averaged are more than what the average NBA player produces, it’s notably worse than his 27.1 PTS/13.8 REB/.7.9 AST he put up in the regular season.

The truth is that the Warriors don’t have a center that can match Jokic and he needs to play like the player that most of the league fears.

As great as Jokic is, he needs support from the surrounding cast to keep up with the Warriors’ onslaught. If he gets that, Denver stands a fighting chance on home court.

Even with the Nuggets getting the advantage of playing at Ball Arena, the Warriors have looked too unstoppable from top to bottom to bet against. Unless Curry, Thompson and Poole begin to slow down, it’s tough imagining any team stopping them.

There’s no question about it: Jokic is one of the most offensively-gifted players that the NBA has seen in recent history. Having said that, his recent struggles against the Warriors have him likely finishing with the under on this prop.

For starters, the Warriors have held him to 26 or fewer points in each game to start the series, holding him to an uncharacteristic .467 field-goal percentage.

Furthermore, Jokic has only surpassed 31 points in two of his last 10 games against the Warriors. Unless he has the performance of a lifetime, expect that trend to continue tonight.

The 2022 Formula 1 season is only six races deep, but the race for this season’s championship alerady appears to be down to just two drivers. Last season, Red Bull driver Max Verstappen claimed his first Formula 1 World Drivers’ Championship in highly controversial circumstances, with Lewis Hamilton denied what would have been a record-breaking END_OF_DOCUMENT_TOKEN_TO_BE_REPLACED