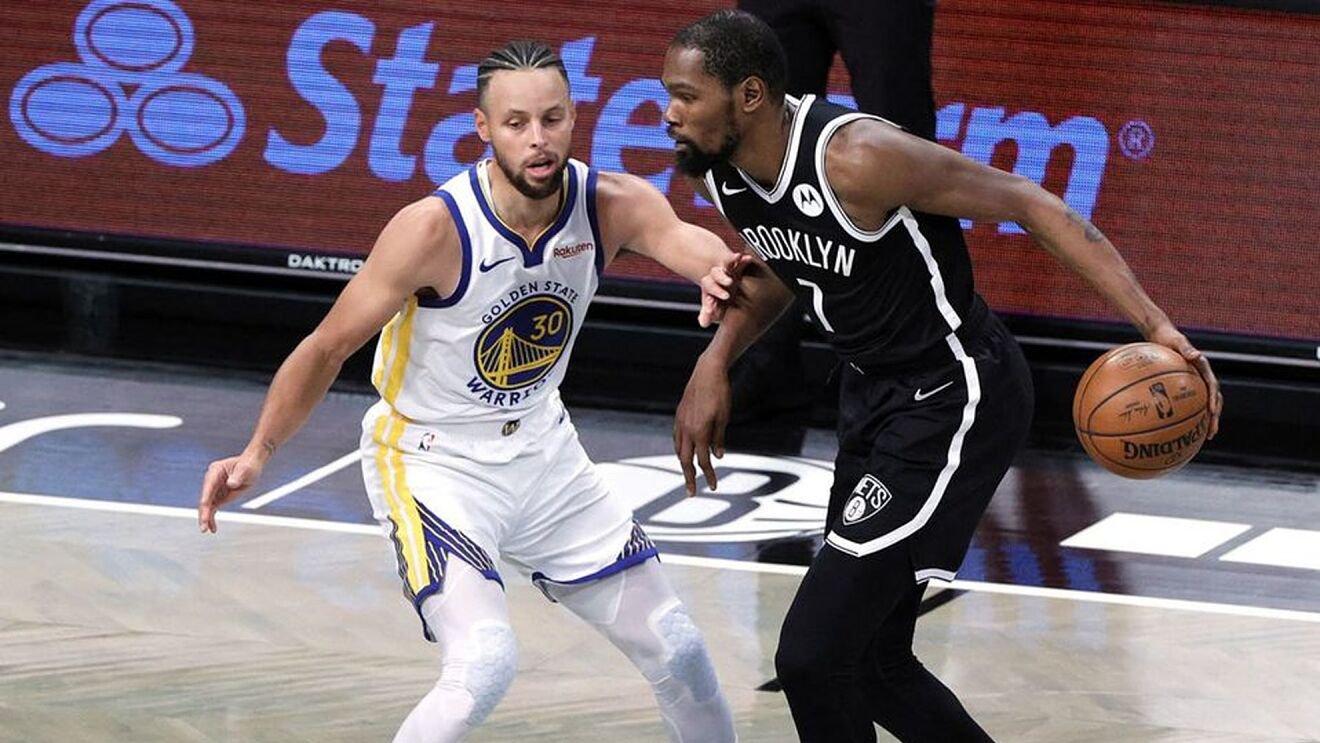 We’re in for a real treat tonight in the NBA. Whether you are invested from an NBA betting perspective, a fan of either team, or just an excited neutral, tonight’s matchup between the Golden State Warriors and Brooklyn Nets should grab your attention.

The Warriors have the best record in the league early on, and Steph Curry’s scoring exploits are key to that. Steph is second in the league in scoring after topping the charts last season.

After a few early stumbles, the Nets have gotten on a roll. While they aren’t in the top spot in the Eastern Conference, they have an early leg up on the Miami Heat, Milwaukee Bucks, and Philadelphia 76ers, the other three leading favorites for the Eastern Conference title. Kevin Durant, the NBA’s leading scorer, has been pouring in the points and is after his fifth scoring title.

As per the latest NBA betting odds at FanDuel Sportsbook, Steph (+270) and KD (+480) are the MVP favorites. Their teams are both among the main NBA title favorites, with the Nets leading the way at +260 and the Dubs fourth in line at +750. Which prolific points producer will come out on top tonight in this clash of contenders?

The Warriors opened a four-game road trip with a close loss to the Charlotte Hornets on Sunday. They tied it in the final minute, but Miles Bridges and missed opportunities doomed the Warriors in a 106-102 loss. The defeat ended a seven-game win streak, but they continue to have the NBA’s best record.

In their win streak, the Warriors won every game by at least 13 points and had four wins by 20+ points. For the sake of balance and nitpicking, there are two caveats to that. The streak was all in the home comfort of the Chase Center, and five of the seven teams they beat currently have a losing record.

But you can’t help who is on your schedule, and it’s hard to argue against the Warriors being a bona fide NBA Finals contender again. Steph has a high scoring average, but he is also shooting below his standard from the perimeter and overall. Against the Hornets, he was 3 for 13 from three, and he is shooting “only” 38.7 percent from deep and 44.2 percent from the field.

But part of that can be attributed to volume, and we all know his percentages will go up. We all also know what he is capable of when his shot is falling. And beyond the fact that high volume means that he is still scoring at a high clip, he is also doing a lot of other things at a higher level than he has been.

And the Warriors have viable complementary scoring options in Andrew Wiggins and Jordan Poole. And weeks from now, they will have one of the best shooters in NBA history back in their ranks. Halloween was last month, but it looks like scary times are ahead for the rest of the NBA. (Yes, I know that was corny. No regrets.)

Can the Nets Keep Piling Up the Points Against Stingy Warriors?

Like the Warriors, the Nets are flourishing without one of the league’s elite talents, as Kyrie Irving remains out. They enter tonight with three straight wins and eight wins in their last nine games.

In their current streak, the Nets have hit 120+ points in each game. They rank 15th in the NBA in scoring (108.5 points per game) but are moving up in that area. Over their last eight games, the Nets have scored 115 or more points six times. In their first six games this season, they averaged only 102.5 points per game, with a high of 114 points.

Kevin Durant was limited to only 35 regular season games last season due to injuries and COVID, but he was fit and firing in the postseason. He’s picked up where he left off against the Bucks in the Eastern Conference semifinals and has hit the 30-point mark seven times already.

Durant’s success is offsetting Kyrie’s absence and James Harden’s shifting role. Harden is averaging only 19.5 points per game and is shooting less than he has since he left the Oklahoma City Thunder for the Houston Rockets in 2012. But he is second in the NBA in assists per game (9.3) and is also averaging 7.6 rebounds per game, and he has three triple-doubles this season. And he can score when he needs to, as shown by his 39-point night against the New Orleans Pelicans in Friday’s 120-112 win.

The Nets are also getting some solid supporting contributions, with LaMarcus Aldridge, Joe Harris, and Patty Mills averaging double digits in points per game. If Kyrie does return at some point, it would make the Nets better. But based on early returns, this team could win an NBA championship even if Kyrie doesn’t come back.

Tonight’s total is indicative of the drop in scoring around the league. And there’s an argument to be made for the under. The Warriors are third in the NBA in points allowed per game (101.8), while the Nets are eighth (103.5 points per game).

But I like the NBA betting opportunity that this total presents for some good value on the over. But the Warriors lead the league in scoring (115.3 points per game), and as mentioned above, the Nets are trending way up in that area themselves. With three of the best scorers of this generation on the court, I’m looking for plenty of points tonight.