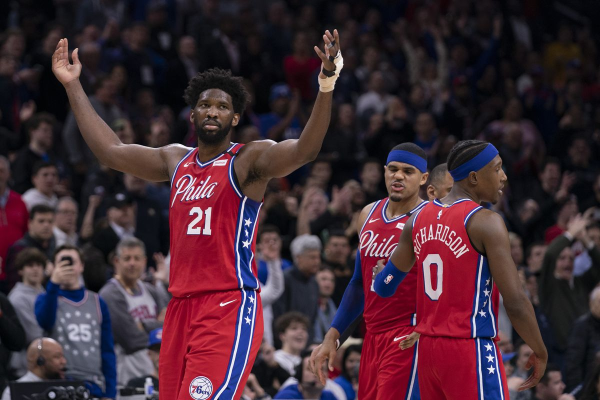 After getting tangled up under the rim during their game Tuesday night, Joel Embiid took a shove from Marcus Morris Sr. that sparked a scuffle. Embiid would respond with a thundering block on a Morris layup attempt on the next possession that set the tone for the rest of the contest.

That series of events serves as a perfect representation of Embiid’s evening, as he started the night on the receiving end of boos from Philadelphia fans before leading his 76ers to a 110-103 victory over the visiting LA Clippers.

The All-Star big man used put-backs, jump shots, blocks, and three-pointers to win back his crowd while keeping his team in a tight contest against one of the Western Conference favorites.

From there, Josh Richardson dragged Philadelphia over the finish line.

Richardson scored 21 points in the contest, 17 of which came in the fourth quarter. “I started attacking more,” Richardson said. “I was reading the defense. Coach (Brett Brown) put the ball in my hands and gave me the freedom to read it and attack.”

The Clippers struggled at the opening of both halves, scoring just 22 and 23 points in the first and third quarters, respectively. Kawhi Leonard’s 30 points and nine assists weren’t enough in this one.

Meanwhile, both Embiid and Ben Simmons racked up 26 points. Simmons earned a triple-double with 12 rebounds and 10 assists.

The 76ers now enter the All-Star break on a three-game winning streak.

The two teams doing battle Tuesday night in Philadelphia appear to be on very different trajectories as we near the All-Star break.

Let’s start with the Clippers, who own a record of 37-17 and sit third in the Western Conference. Los Angeles will end a four-game road trip in Boston before getting to a nine-day rest over the All-Star break.

The Clippers are looking up at both the Lakers and Nuggets, but there isn’t a great deal of urgency surrounding this team. Instead, they know they’re a surefire top seed in the conference and value rest over their regular-season record.

That’s the formula Leonard used to lead the Raptors to last year’s NBA Finals victory. Load management throughout the regular season allowed Leonard to be at his best throughout the playoffs.

So, the Clippers are content to win most of their games, finish behind the Lakers, and enter the postseason with a healthy and energetic roster.

The 76ers don’t have that same luxury. Despite entering the season as one of the favorites in the Eastern Conference, Embiid and company currently sit fifth in the conference with a record of 34-21.

Philadelphia is currently 13 games back of the conference-leading Bucks and would need a huge run of wins to catch the 40-14 Raptors, who are currently in second in the East.

So, the 76ers need to figure out their issues on the road, as it seems more and more likely they’ll be unable to claim home-court advantage as early as the first or second round of the playoffs.

We now have a significant deal of evidence to help us determine whether or not a team like Philadelphia still looks like a top contender in the Eastern Conference.

This eclectic squad can be great one night and lackluster the next, which has helped to earn it a complicated relationship with its own fans. Now, the 76ers face an uphill battle to claim one of the conference’s top seeds.

After beginning the season as a second favorite behind only Milwaukee, Philadelphia is tied with Boston and Miami with odds of +700 to win the Eastern Conference. The Bucks are heavy favorites at -140, and the Raptors sit at +850.

With the amount of talent on the Philadelphia roster, this team should be contending for a conference championship at the very least. Yet this squad hasn’t shown enough to be considered a favorite at this point in the season.