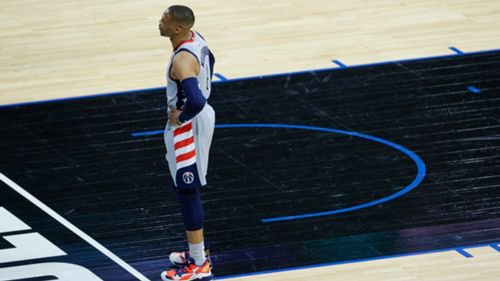 The Eastern Conference’s top seed got the job done at home in the first two games at home, but can they maintain control as the 76ers vs Wizards series moves to D.C.?

Things got a little wild in Game 2 with Russell Westbrook getting a popcorn shower on the way to the dressing room. I hate hearing about stupid fans like that! The bigger story is that he is questionable for this game. Down 2-0 in the series, it is hard to imagine the Wizards getting back in it without him. The first game was kind of close but Game 2 was anything but. Things got ugly as Westbrook was exiting the court due to injury, but that is not the reason the Wizards lost. If he isn’t healthy, it is going to be next to impossible for the Wizards to get back into the series.

Philly Bound for a Rude Welcome in Washington

Philly was methodical in their win to go up 2-0 in the series. Neither Tobias Harris nor Joel Embiid posted big scoring nights, but efficiency was the story of the game. Embiid was 8 for 12 and Harris was 9 for 13 from the field.

After a light scoring game, Ben Simmons took the most shots on the team, going 11 for 15. When your high-volume guys are hitting at those rates, offenses are really hard to stop. All three are accomplished offensive players, but those percentages also helped by Washington’s lack of defensive ability.

Being a road favorite was a profitable situation for the 76ers during the regular season. They were 14-9 ATS in that role.

Russell Westbrook is one of the most aggressive players in the NBA and generally, that helps his game. He is questionable for Game 3, and if he plays he needs to find a way to channel his intensity. He is questionable and they need him desperately. He just has to play within himself.

Whether he plays or not the Wizards still need someone other than Bradley Beal to step up. I am not sure where they can turn though. Davis Bertans did not make a shot in the Game 3 loss, and Ish Smith took 14 of them. That was second on the team and completely out of character for the reserve point guard. Some of that was the extra opportunity with Westbrook out of the game, but it was also good coaching and defense by the 76ers. That is what winning basketball is: forcing your opponent to beat you doing the things they don’t want to or can’t do.

When the #8 seed is down 2-0, and possibly missing their best player, it might be time to try something else. Or they can try and take the Boston approach of last night and ask Beal to play hero ball like Jayson Tatum. That said, they might need more than 50 points from their top scorer to get a win and get back in the series.

Washington has been a good bet at home, going 20-16 ATS. That includes an 11-9 ATS mark as a home underdog.