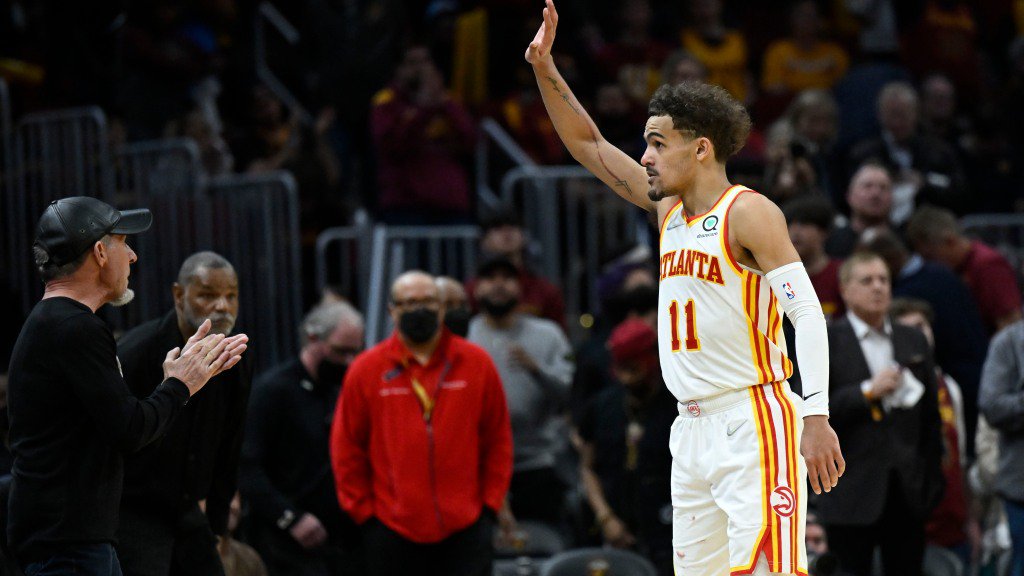 After winning in Cleveland on Friday night, the Atlanta Hawks face a quick turnaround to open the first round of the NBA playoffs as they face a familiar opponent in the Eastern Conference’s #8 vs. #1 matchup.

While the Milwaukee Bucks, Brooklyn Nets, and Philadelphia 76ers have gotten the biggest NBA championship hype in the East this season, the Heat posted the best record in the conference.

But will this be the start of a run to a second NBA Finals trip in three seasons, or will Trae Young and the Hawks do what they did in all three of their playoff series last year and win Game 1 on the road?

How Will Young and Atlanta Fare with Quick Turnaround After Play-In Tournament Win?

While the Heat have had a week to rest up and prepare for the playoffs after finishing up the NBA regular season last Sunday, the Hawks have had quite the busy week. Overall, it has already been a pretty active April for Atlanta.

Over the final week of the regular season, the Hawks had a back-to-back that took them from Toronto (Tuesday, April 5) to Atlanta (vs. the Washington Wizards that Wednesday), that they followed with a road trip to Miami (Friday, April 8) and a regular season finale at Houston (Sunday, April 10).

This past Wednesday, they hosted the Charlotte Hornets in a play-in elimination game, then they had to hit the road to take on the Cleveland Cavaliers in Friday night’s winner-take-eighth game.

So, it has been a pretty busy stretch, and given that all of those games were important games–the Hawks were in the mix for the #7 seed entering the final week of the regular season and then had to win their regular season finale in order to beat out the Hornets for ninth and the chance to host Wednesday’s game–their important players have had to log a lot of minutes.

That includes Trae Young, who averaged 34.9 minutes per game in the regular season but has logged at least 35 minutes in five of seven games in April and 18 of 25 games since the All-Star break, including 40 minutes in Friday’s comeback win in Cleveland. In that 25-game stretch, the Hawks have had five back-to-backs, and Young has played in all of them.

But will any of this matter for Game 1 in Miami? Here’s a look at how the Hawks have fared in the scenarios they face in this matchup:

By comparison, the Heat are 17-6-0 SU and 14-9-0 ATS when they have the rest advantage, and they posted the best home record in the Eastern Conference at 29-12, a game clear of the Boston Celtics and two games clear of the Bucks, Hawks, and Chicago Bulls.

So, this isn’t a particularly favorable situation for the Hawks, who lost both regular season visits to FTX Arena and three of four overall in their season series with the Heat.

However, the same could be said for every series in their run to the Eastern Conference finals last season. They started each series on the road, and they won each game.

Young put up big numbers in each win, going for 32 at MSG, 35 in Philadelphia, and 48 in Milwaukee. In Friday’s win in Cleveland, he overcame shooting struggles to put up 38 against the Cavs in the 107-101 win.

At the break, the Hawks trailed by 10, and Young had more turnovers (four) than made field goals (three). Over midway through the third, he was just 4 of 13 from the field. He finished the game by making nine of his last dozen shots.

If he can hit the 30-point mark in this trip to Miami, the Hawks should grab at least a split. In the 37 times he has scored 30+ points this season, the Hawks have come away with the win 27 times.

(A slight tangent, directed at those who are betting on the series outcome or length: If you were to take all of those numbers, divide them by 78 (the number of games he has played this season), and apply them to a seven-game playoff series, that means that he should go off at least three times over the course of a seven-game series, and the Hawks should win at least two of those games. Adjust your bets accordingly.)

While the Hawks have done a lot of traveling recently and have had little rest, that isn’t necessarily a bad thing.

They are riding high entering the series, as they have posted three important wins in a row: winning at Houston to lock up the ninth seed, throttling the Hornets by 29 in Wednesday’s elimination game, and then Friday’s rally in Cleveland to rip a playoff spot from the Cavs.

In Saturday’s lone game that involved a team that came out of the NBA Play-In Tournament, that team opened with a Game 1 road win, as the Minnesota Timberwolves beat the Grizzlies by 16 in Memphis.

The Hawks may have lost their first two games in Miami this season, but this is the perfect scenario and timing to make the third time be the charm.

If you are reading this, you probably have a good idea of how much Young lives for moments like these, as he showed in each series last year and in Friday’s play-in win. Look for him to embrace the moment again and put the Hawks up 1-0 over their Southeast Division rivals.

Given everything said above, would there be any other move to make?

Young put up 35 in Miami in the penultimate game of the regular season, and if he matches that, not only will this hit comfortably, but the Hawks have a good chance of coming out with a better result than that last Hawks vs. Heat game.

The 2022 Formula 1 season is only six races deep, but the race for this season’s championship alerady appears to be down to just two drivers. Last season, Red Bull driver Max Verstappen claimed his first Formula 1 World Drivers’ Championship in highly controversial circumstances, with Lewis Hamilton denied what would have been a record-breaking END_OF_DOCUMENT_TOKEN_TO_BE_REPLACED