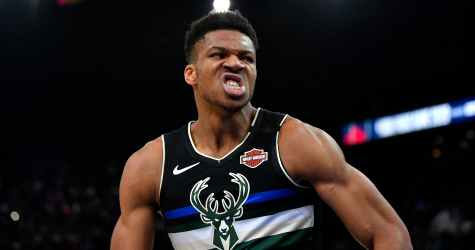 It seemed like it was only yesterday that the Los Angeles Lakers became the 2019-20 NBA Champions inside of the “Bubble” in Orlando.

Maybe that’s because that was only a bit more than two months ago already.

With the 2020-21 preseason well underway, it’s that time again to discuss the favorites to win awards this upcoming season. Will Giannis Antetokounmpo win his third Most Valuable Player trophy in a row, joining Larry Bird, Bill Russell, and Wilt Chamberlain as the only players to achieve that? Can he also repeat as Defensive Player of the Year? Will Anthony Edwards be able to justify the controversy of him being taken first overall in the 2020 Draft by becoming the Rookie of the Year?

Fortunately, FanDuel has odds on who will win each regular season award to help us sort through the noise.

Can Giannis Run it Back Again?

As mentioned before, Antetokounmpo will be seeking his third straight MVP award, which would further cement his place in NBA history among the best. He averaged 29.5 points, 13.6 rebounds, and 5.6 assists per game last season.

However, he isn’t who oddsmakers have as the favorite to win it.

The Dallas Mavericks’ Luka Doncic currently has the best odds of winning the MVP award, sitting at +410 at FanDuel. Budding Slovenian superstar had a breakout performance last season, with 28.8 points per game, along with an average of 8.8 assists and 9.4 rebounds.

At only 21 years old, it’s not out of the realm of possibility for Doncic to have an even better season with last year’s experience under his belt. With a young surrounding cast, Doncic and the Mavericks could be dangerous again this season.

On the other hand, Antetokounmpo is second in the odds at +480. Having just signed a five-year, $228.2 million supermax extension with the Milwaukee Bucks, he’ll want to prove that he is worth every penny and winning his third MVP in a row would be one way of doing just that. Along with winning a championship, of course.

With the third best odds it’s a tie between the Los Angeles’ Lakers Anthony Davis and Golden State Warriors’ Stephen Curry, each at +850.

After winning the NBA Championship and showing that the blockbuster trade was worth it, the Lakers rewarded Davis with a four-year, $146 million max extension. With LeBron James potentially resting a lot more this season, will Davis step up even more to show that he can be the team’s MVP?

And can Curry return to MVP-caliber as well? He missed most of last season with an injured hand, so it’s no surprise that people are wondering how he’ll look in a full season, especially without Klay Thompson, who’ll miss the entire season with an achilles injury. However, Curry will still have the likes of Draymond Green and Andrew Wiggins, as well as newcomers in Kelly Oubre and rookie James Wiseman to show that he has another MVP run in him.

James Harden (+1000): A former MVP winner himself, will Harden be able to set aside the drama in Houston to win another MVP with the Rockets? Or will he have to do it on a new team should he be traded?

Kevin Durant (+1300): Durant has not played a real basketball game since he tore his achilles tendon in the 2019 NBA Finals. Will he be the KD of old in Brooklyn while teaming up with Kyrie Irving? Or will there be too much court rust too shake off?

LeBron James (+1500): At 35 years old, the King just won his fourth Finals MVP award, so would it be that surprising if he won another regular season MVP too? James keeps aging like fine wine, so it shouldn’t surprise anyone if he’s in the conversation.

Damian Lillard (+1900): Lillard and the Portland Trailblazers are often underrated when it comes to being threats in the Western Conference. Lillard showed in the bubble that when it’s Dame Time, he’s among the best in the league and if he can do that for a whole season, he’d certainly be an MVP-caliber player.

Kawhi Leonard (+1900): Leonard’s first season with the Los Angeles Clippers didn’t go as planned after a second round elimination by the Denver Nuggets. However, never underestimate the Klaw.

Jayson Tatum (+2600): Tatum continues to get better and better every year for the Boston Celtics. As the focal point of their young team, the 22-year-old could be poised to take another step towards elite status in the league.

The Charlotte Hornets’ LaMelo opens the 2020-21 season as the favorite to win the Rookie of the Year award. Having played for the Illawarra Hawks in Australia last year, Ball averaged 17 points, 6.8 assists, and 7.6 rebounds per game before being taken 3rd overall in the 2020 NBA Draft.

Ball’s odds of winning the award are +390 and he already looks like he’s fitting into the league, already pulling off full court passes in the preseason.

Obi Toppin (+440): The New York Knicks 8th overall pick will certainly have the spotlight on him with those type of odds, but the former Dayton Flyer was the 2020 National College Player of the Year, so he should be fine with the pressure from New York media.

Anthony Edwards (+700): The 1st overall pick of the 2020 draft has all the talent in the world to be Rookie of the Year, however, comments about how he loves football and rapping more than basketball have put his work ethic into question. If he can work things out, Edwards could possibly snag the honors.

James Wiseman (+700): Fresh out of the University of Memphis, Wiseman will assume the role of the Warriors’ top center spot, opening up endless possibilities. With starter minutes and by playing with players like Curry, Wiggins, and Oubre could give Wiseman a good shot at being ROTY.

Killian Hayes (+950): With former MVP Derrick Rose mentoring him and the fact that the Detroit Pistons don’t have a lot of weapons, Hayes has a good outside chance of putting together a solid rookie campaign.

AD Favored for DPOY Honors With Giannis Behind he and Gobert

The Lakers’ Anthony Davis is currently the frontrunner for Defensive Player of the Year with odds of +240. While Antetokounmpo won the award last year, Davis finished in second place with 14 first place votes.

Both players were on the All-Defensive First Team last season.

Antetokounmpo actually has the third best odds (+390) to become the DPOY, which would be his second in a row. If he’s successful, he’d be the ninth player in NBA history to win the award back-to-back.

Rudy Gobert (+300): Despite not being the “favorite” to win this year, it wouldn’t be a surprise if the Utah Jazz center won his third DPOY award in four years. Gobert is one of the best defensive players in the NBA, having been the DPOY in 2018 and 2019, as well as being an All-Defensive First Team player over the last four consecutive years. And after all, he did shut down the entire league last season…

Bam Adebayo (+950): After averaging over 33 minutes per game in his third NBA season, Adebayo was named to the All-Defensive Second Team for the first time. After a trip to the NBA Finals that ended in defeat, Adebayo will look to build his resume this season with a sturdy defensive campaign.

Joel Embiid (+1100): In 2018 and 2019, Embiid was on the All-Defensive Second Team. Statistically speaking, Embiid regressed last season, which may have been caused by injuries that forced him to miss games. Nevertheless, never underestimate what the Process can do when he wants to prove a point.

The Most Improved Player award can be hard to predict because it’s hard to say who will make the biggest jump and whose potential equals bonafide NBA talent.

With even less scoring options on the Thunder this year, Gilgeous-Alexander could be poised to take another massive statistical jump.

After missing the 2018-19 season with a back injury, Porter Jr. shot .509/.422/.833 while averaging 9.3 ppg off the bench. With plans to start with Jamal Murray and Nikola Jokic this season, Porter Jr. should have every opportunity to succeed.

Jamal Murray (+1600): One of the biggest stories from the Orlando bubble was the fact that Murray was putting on superstar performances almost every night during the playoffs. If he can sustain that effort this season, Murray could end up being the favorite for Most Improved Player, and could end up earning other awards in the process.

Tyler Herro (+1800): Another player who stood out in the bubble was the Miami Heat’s Tyler Herro. Entering his sophomore season, Herro looks to build on the 16.3 points per game he put up across 29 games (regular season and playoffs) in the NBA bubble.

Zion Williamson (+1800): Having missed a lot of the 2019-20 season with a meniscus injury, Williamson looks to bounce back in his first full NBA season. Having averaged 29.1 points per game in the games he did play in, what will a fully healthy Williamson look like?