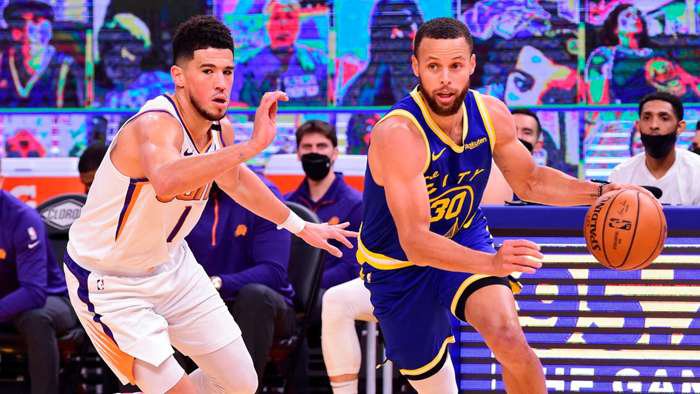 Could we have one of the best games of the NBA season tonight in Phoenix? The Golden State Warriors have the league’s best record at 18-2 and have won seven in a row, led by NBA MVP favorite Steph Curry. The latest NBA betting odds have Curry as a +150 favorite to win his second MVP, while the Warriors are a +290 favorite to win the Western Conference title after two seasons of not contending. And they don’t have even have Klay Thompson and James Wiseman yet. It’s no wonder then that the Dubs are drawing a lot of love early on.

However, the Phoenix Suns are hot on their heels and have made a resounding statement that last season’s NBA Finals run was anything but a fluke. The Suns have won 16 straight games since a 1-3 start and are only one game behind the Warriors in the standings. There is a lot of the season left to play out, but Devin Booker, Chris Paul, and the Suns don’t look like giving up their Western Conference crown without a fight.

Tonight, the NBA’s top two teams battle it out in the desert, and it is obviously the best game of the night in terms of matchups. Will it live up to its billing? And which bets should you make on tonight’s action in Phoenix? We have betting advice for Warriors-Suns and the other four games on tonight’s NBA schedule below.

NBA betting odds listed below are via FanDuel Sportsbook as of Tuesday, November 30, 2021 at 4:44 p.m. ET. To compare NBA betting odds from several top online sportsbooks, check out our NBA odds.

The best bets offered below are not firm picks but are recommendations and suggestions to inform and aid your betting selections. We do also offer aggregated NBA betting picks for every NBA matchup every day.

Knicks vs Nets Best Bet #2: Knicks team total under 104.5 – Throwing in a bonus rec also based on the Nets’ success following a loss. The Nets have held four or five opponents under 100 points. The only team that hit the century mark was the Philadelphia 76ers on October 22, but it wasn’t enough in a 114-109 Nets win.

Warriors vs Suns Best Bet: Warriors ML – This is the Suns’ first game back home after a week on the road against the Spurs, Cavs, Knicks, and Nets. First games after extended road trips can be tricky, and the Warriors, even if Andrew Wiggins (questionable – back spasms) is out tonight, are not the ideal opponent in such a scenario.

The Warriors have been wreaking havoc across the NBA early on this season, with 14 double-digit wins in their 18 wins. Wiggins or no Wiggins, to get them at plus odds (which are now out to +130 at the time of writing), even on the road against a team with a 16-game win streak, is great value versus taking the Suns to win or cover.

Pistons vs Trail Blazers Best Bet: Blazers to cover – This is already the sixth back-to-back for the Blazers. Portland is just 2-3 SU on the back end of their back-to-backs, but they have won both times they have played at home in this situation. Both times were covers, a 15-point win over the Lakers as a five-point favorite and a five-point win over the Raptors as a three-point favorite. The Blazers also do well with bouncing back from being blown out, having won and covered both times in the next game following their previous 20+ point losses this season.

The Pistons have put in some good efforts in recent losses to some quality teams. But they come into tonight with seven straight losses, and seven of their eight road losses this season have been by eight or more.

Lakers vs Kings Best Bet: Lakers to cover – This is more of hunch-based than the other matchups on tonight’s NBA schedule. The Lakers are anything but predictable, and if things follow their recent pattern of alternating wins and losses, they’re going to lose tonight. Until and unless they find their way, there is no good reason to put any sort of serious stake or stock in the Lakers.

But after they squandered a win against this team at Staples last Friday night, I am compelled to take the optimistic view and say that they will not let the same thing happen tonight. We’ll see if pride and frustration are powerful enough to produce the goods tonight.