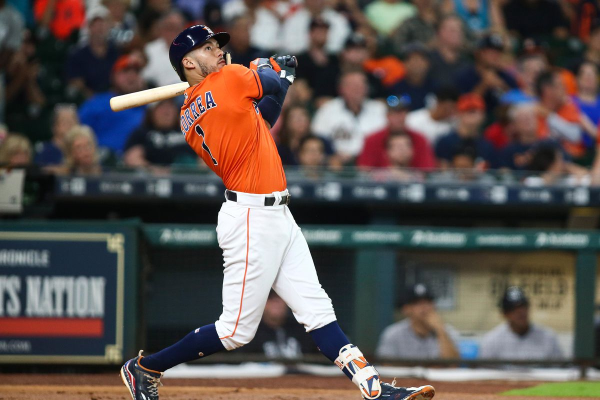 Somebody is going to have a pretty impressive streak end on Thursday. The Houston Astros are currently carrying a ten game winning streak on the road into Tampa Bay while the Rays have won eight straight games at home. Only one will continue, though, as the Houston Astros (54-28) travel to Tropicana Field to take on the Tampa Bay Rays (39-40) in what is the first game of a four game set starting Thursday. The Astros will send righty Lance McCullers Jr. (8-3, 3.82 ERA) to the mound to face off with Ryne Stanek (1-1, 1.99 ERA). First pitch is scheduled for 7:10 pm ET.
The moneyline for the game is set at the Houston Astros -156 and the Tampa Bay Rays +146. The over/under on runs scored is set at 7.5.

No one can say that the Astros are suffering from a World Series hangover. At 54-28 they are barely off the pace of last year’s run and currently sit 3.5 games ahead of the Seattle Mariners. While the pitching has truly been the story for the Astros thus far, their offense has heated up after a pretty sluggish start to the season. Probably the hottest hitter on the Astros recently has been Alex Bregman. In fact, in his last two games, he has had five doubles and two home runs, including a two-run, walk-off home run against the Blue Jays on Wednesday. On the season, he is currently hitting .277/.379/.508 with 14 home runs, 49 runs batted in, 50 runs scored and has had more walks (47) than strikeouts (46). When you also throw in Jose Altuve, Carlos Correa (who has been dealing with some back issues), Yuli Gurriel, George Springer and Evan Gattis, this is a lineup that doesn’t give many breaks.

As good as the offense can be, the pitching has been even better. It is crazy to think that Lance McCullers Jr., who is 8-3, with a 3.82 ERA, 1.19 WHIP, .221 batting average against with 99 strikeouts in 94.1 innings has actually been only the fourth best starter for the Astros behind Justin Verlander, Gerritt Cole, and Charlie Morton. In his last start, McCullers went 6 innings, allowing 3 earned runs and striking out 9 in a no-decision against the Kansas City Royals. The Tampa, Florida, native will look for his ninth win of the season on Thursday.

Rays Glad To Be At Home

The Rays have to be one of the hottest teams in baseball right now, especially at home. In their last five games they have swept a three-game series against the New York Yankees and a two-game series against the Washington Nationals. In those five games, they have outscored their opponents 25-7. In fact, their last loss came at the hands of the Astros in Houston last Wednesday. After dropping two of three in Houston, the Rays will look to start this four-game series with a win.

To do that, they will employ their starting bullpen approach again Thursday. This time it is Ryne Stanek who will get the call first out of the gate. On the season, Stanek is 1-1 with a 1.99 ERA, 0.93 WHIP and opponents are hitting a miniscule .130 against him. He has 25 strikeouts in 22.2 innings of work. While those numbers are impressive, you have to remember that he is probably only going to be good for an inning or so as in his last three starts he has only gone a combined four innings. Thus, it won’t be just about how well he pitches, but how the whole bullpen pitches against the Astros.

One of the better offensive threats for the Rays this year has been the catcher, WilsonRamos. The current AL All-Star vote leader at catcher, Ramos is currently hitting ..292/.338/.465 with a .803 OPS. He has 11 home runs and 39 runs batted in.

Coming off of the high of the walk-off home run to beat the Toronto Blue Jays, I think the Astros keep it rolling in Tampa Bay. Statistically, they are significantly better team on the road than at home, and I think they will get to the Rays bullpen early and often. While Lance McCullers has been far from shutdown this season, I do think he will keep a modest Rays offense in check. One concern is Carlos Correa, as the shortstop has been out for a couple days with discomfort in his back, but the Astros are so deep and their lineup is so long that they can withstand the absence. Take the Astros -156.