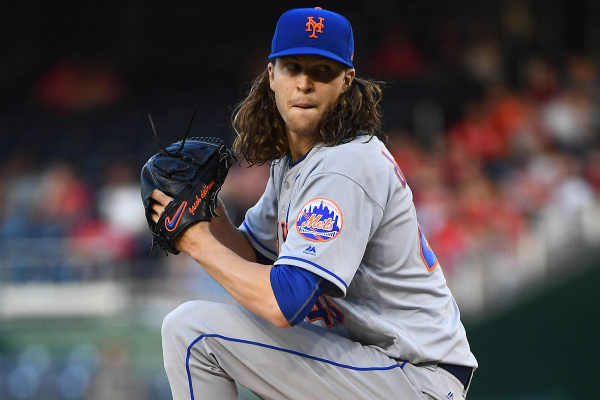 While the New York Yankees and New York Mets may be having completely different types of seasons, you never know what to expect during the Subway Series.  The two teams have split the first two games of the three game set this weekend, with the Mets taking game one 7-5 on Friday and the Yankees winning 7-6 on Saturday. On Sunday night, the two teams will meet in the rubber match as the Mets (40-56) travel to Yankee Stadium to take on the Yankees (63-34).  The Mets will send out All-Star righty Jacob deGrom (5-4, 1.68 ERA) to the mound to square off against Masahiro Tanaka (7-2, 4.54 ERA). First pitch is scheduled for 8:08 pm ET.

The moneyline for Sunday’s game is set at the New York Mets +143 andthe New York Yankees -153.  The over/under for runs scored is set at 8.

The Mets are definitely out of the playoff hunt this season.  Let’s be honest, they were never really in it. At 40-56 this season, they currently sit in last place in the NL East, 14 games out of first place.  After trading Jeurys Familia to the Oakland Athletics on Friday, they will likely be open-minded about other possible trades as the deadline looms. One name that has surfaced, but would likely take a king’s ransom to acquire, is righty Jacob deGrom.  With rumors swirling, deGrom will take the mound for the Mets on Sunday. On the season, he is 5-4 with a 1.68 ERA, 0.97 WHIP and opponents are only hitting .202 against him. In 123.1 innings pitched, he has 149 strikeouts versus just 30 walks. In his last outing, a 3-0 Mets win over the Phillies, deGrom took a no decision despite pitching 8 innings of scoreless ball, striking out 7.

On the offensive side, there just hasn’t been much there for the Mets this season.  Asdrubal Cabrera has probably been there best hitter, or at least most consistent, hitter.  He is hitting .280/.332/.487 with a .820 OPS. He has 17 home runs and 53 runs batted in, leading the team in both categories. There are a few players who have had success against Masahiro Tanaka.  Jose Bautista is batting .256 in 39 at bats with 2 home runs. BrandonNimmo and Jose Reyes have also taken him deep in their careers.

Yankees Look To Make Push To Catch The Red Sox

At 4.5 games back, the Yankees know they have work to do if they want to catch the Red Sox, who own the best record in all of baseball.  They hope to start this push with a series win over the Mets Sunday. To do so, they will be sending out righty Masahiro Tanaka. On the season, he is 7-2 with a 4.54 ERA, 1.13 WHIP and opponents are hitting .230 against him.  In 83.1 innings, he has struck out 83 and walked 22. What has hurt him the most is the long ball. He has given up 18 on the season. He has taken no decisions in his last three starts, going a combined 15.2 innings, allowing 6 earned runs and striking out 18.

Despite his status as an ace, there are a couple Yankees who have had success against Jacob deGrom in their careers.  No more so than GiancarloStanton. The slugger is hitting .360 against him in 25 at bats, with 4 home runs and 8 runs batted in.  Gary Sanchez and Brett Gardner have also hit homers off of deGrom. In Saturday’s game, it was Aaron Judge who did the damage, though.  He went 3 for 4 with a home run. That gives him 26 home runs on the season.

I have gone back and forth on this one but I just really like the way deGrom has been pitching this season.  He will have to go through a gauntlet of a lineup, but he has the stuff to dominate any team on any night. Throw on top of that the fact that the Mets offense has shown signs of life the first two nights and I think they could shock the Yankees and win the series.  It might be a long shot, but take the Mets at +143.