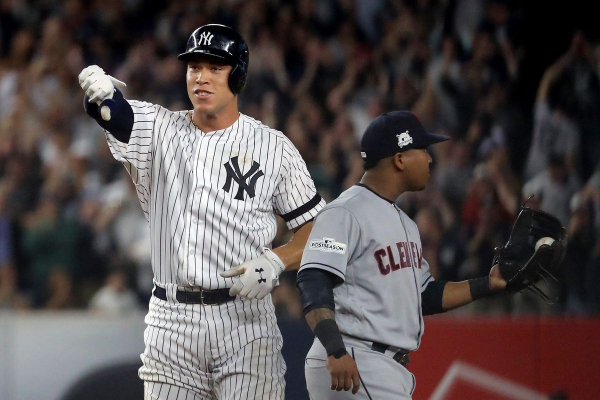 Sunday night not only features one of the most prominent rivalries in all of professional sports, but it also features two of the best teams in all of baseball.  The Boston Red Sox (56-28) will be traveling to YankeeStadium to take on the New York Yankees (53-27). The two teams have split the first pair of games in the three game series with the Yankees winning 8-1 on Friday and the Red Sox winning 11-0 on Saturday.  If the rivalry didn’t add enough intrigue, the pitching matchup for Sunday night is pretty good, too. David Price (9-5, 3.66 ERA) will take the mound for the Red Sox against Luis Severino (12-2, 2.10 ERA) for the Yankees. First pitch is scheduled for 8:05 pm ET.

The moneyline for the game is set at the Boston Red Sox +180 and the New York Yankees -192.  The over/under on runs scored is set at 8.

On Saturday, the Red Sox got the best of both worlds, great pitching and consistent hitting from their offense.  In fact, the offense was able to put up 11 runs on 17 hits. Rafael Devers had probably the game of his brief career going 5 for 5 with 3 runs, 4 runs batted in and a home run.  Sandy Leon also added a home run in the contest.

David Price will be taking the bump for the Red Sox Sunday night.  On the season he is 9-5 with a 3.66 ERA, 1.21 WHIP and hitters are batting just .233 against him.  In 93.1 innings pitched he has struck out 89 versus 33 walks. He has also given up 10 long balls this season. In his last start against the Angels, Price got the win after going 6 innings, giving up 1 earned run and striking out 7.  He will need more of the same to beat a potent Yankees lineup Sunday.

After finishing 18-10 in the month of June, the Yankees hope to pick up right where they left off in July.  To do so, they are going to need their bats to come around better than Saturday night. After managing just two hits against Chris Sale, they will look to bounce back Sunday. While Judge and Stanton are impressive with their power, the Yanks have to be thrilled with the play from two of their younger players in Gleyber Torres and Miguel Andujar.  Torres is hitting .288/.342/.543 with a .885 OPS. He has 14 home runs and 39 runs batted in. Andujar is hitting .280/.306/.515 with a .821 OPS. He has added 12 home runs and 38 runs batted in from the hot corner. With paly like this from the rookies, and Stanton and Judge anchoring the lineup, they are tough matchup every night.

While most of the focus with the Yanks is on their bats, Luis Severino has quietly turned into a dominant ace.  On the season, he is 12-2 with a 2.10 ERA, 0.96 WHIP and opponents are hitting just .201 against him. In 111.2 innings pitched he has dominated hitters striking out 132.  In that time, he has also allowed just 26 walks. With a bullpen as dominant as the Yankees have, the Yanks are very tough to beat when he is on the mound. In his last start, against the Phillies, he went 7 innings, allowing no runs and striking out 9 en route to a win.

Yankees Ride Severino To A Win

Record wise, the RedSox are the best team in baseball, but even the best teams lose to dominant pitching and that is what Luis Severino brings.  He has embraced his role on the Yankees as the staff ace, and I think that will come through on the nationally broadcasted game. The Red Sox won’t make it easy on him, but ultimately I think he will be too much for them tomorrow night.  My pick is the Yankees at -192.