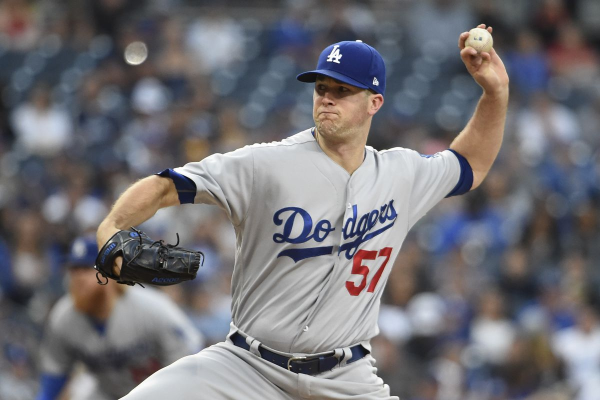 With the All-Star break just right around the corner, the Angels and Dodgers find themselves going in two different directions as the mid-summer classic approaches. For the Angels, they sit in fourth of their division, and at double-digit games back from the division-leading Astros, it looks like there is a good chance they will be sitting out of the playoffs this year. The Dodgers, on the other hand, have finally turned around from their slow start and currently sit atop the NL West. Regardless, as the battle for LA bragging rights continues, both teams will have something to play for.

Game two of the three-game series will resume when the Angels (48-47) travel to Dodger Stadium to take on the Dodgers (52-42). It will be a battle of southpaws as the Angels send AndrewHeaney (5-6, 3.84 ERA) to the mound to square off with the Dodgers’ AlexWood (5-5, 3.88 ERA). This is a pitching rematch of the July 8th game between the two teams when the Angels won 4-3 at home. First pitch is scheduled for 7:15 pm ET.

This season, the Angels have not fared particularly well against left-handed pitchers. In fact, they rank second to last against them in all of baseball. On the season, the Angels, as a team, are hitting just .223/.298/.375 with a .673 OPS. While they technically beat James Paxton on Thursday, it is worth noting that he left the game in the first inning with an injury that has since put him on the disabled list. In their previous start against a lefty, the Mariner’s Marco Gonzales pitched 7 innings against them, allowing only 2 hits and striking out 4.

On the mound, AndrewHeaney will be taking the ball for the Angels. On the season, Heaney is 5-6 with a 3.84 ERA, 1.17 WHIP and opponents are hitting .230 off of him. In 96 innings pitched, he has struck out 96 versus 29 walks. This will be the second time in a row that Heaney has pitched against the Dodgers. In his last outing, he picked up the win going 7 innings, allowing 3 earned runs and striking out 10. That is the exact same line for his last two outings actually, as he did the same against the Mariners on July 3, although that outing ended up in a loss.

Dodgers Looking To Cruise Into Break

Alex Wood will be taking the ball for the Los Angeles Dodgers on Saturday. On the season, he is 5-5 with a 3.88 ERA, 1.15 WHIP and opponents are hitting .254 against him. In 99.2 innings pitched he has struck out 88 versus only 18 walks. He has also given up 12 home runs. In his last outing, Wood faced these same Dodgers and went 6 innings, allowing 3 earned runs, walking 2 and striking out 4. He took a no decision in the 4-3 loss.

Offensively, the Dodgers have gotten an amazing season from outfielder Matt Kemp. Once thought to be a candidate to be released after he was acquired in the offseason, Kemp has been putting up All-Star numbers this year. He is currently hitting .316/.357/.537 with a .894 OPS. He has 15 home runs, 60 runs batted in and has scored 42 runs. They have also gotten a surprise season from MaxMuncy. The home run derby contestant just hit his 22nd home run of the season on Friday.

The first go around between Alex Wood and Andrew Heaney was pretty good. They both had quality starts and the only difference was a run the Angels were able to get off of the Dodgers’ bullpen. I expect Saturday’s contest to be pretty solid, too. The Angels are an intriguing pick in this one, if for no other reason because they have the best player in the world on their team in Mike Trout, but I have to take the Dodgers. There is just something about that awful batting line against lefties that makes me think it may creep up on them Saturday night. Take the Dodgers -205.

After the Novak (or Novax?) Djokovic visa saga dominated pre-tournament headlines, we can finally look forward to some on-court headlines as the Australian Open gets underway. Djokovic news has taken the focus off of the tournament, which is certainly understandable. After all, the fate of the world number one and top seed would significantly impact END_OF_DOCUMENT_TOKEN_TO_BE_REPLACED