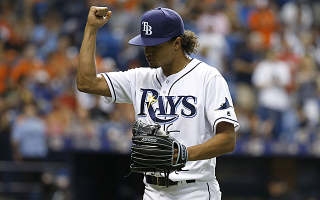 It’s been an interesting trade season for Major League Baseball. Most of the bigger deals, most notably Manny Machado going to the Dodgers, were done well before the deadline. Of course, the last 48 hours prior to the deadline have been crazy. Let’s recap all the big and little trades that went on just in case you missed something.

The Blue Jays and Astros made a strange deal Monday night, with Roberto Osuna going to Houston for Ken Giles and two younger pitchers. Osuna is set to return this weekend from a 75-game suspension. But his legal troubles in Canada stemming from a May arrest for assault are far from cleared up. Between that and the extended layoff, there’s some risk to this trade for Houston. That being said, they free themselves of the problematic Giles, who the Blue Jays hope can turn things around in a new setting.

As if getting Machado wasn’t enough, the Dodgers also snuck in a trade for second baseman Brian Dozier just under the wire. Dozier’s production has dropped off from the past couple of seasons. But he can still provide plenty of power, something the Dodgers haven’t gotten this year from Logan Forsythe, who went to the Twins in the trade.

Another surprising trade was the Tampa Bay Rays acquiring Tommy Pham from the Cardinals for three minor leaguers. St. Louis is at least on the periphery of the playoff picture, although moving Pham frees up room for some of their younger outfielders to see regular time in the big leagues. Pham, meanwhile, is under team control for three more years, so the Rays are thinking long-term with this deal.

We Need A Backstop

The Phillies gave their playoff hopes a boost by acquiring catcher Wilson Ramos from the Rays. Ramos has had a strong offensive season, particularly lately and is a nice pickup for the Phillies who also added infielder Asdrubal Cabrera over the weekend.

Man in the Middle

Cleveland pursued some big names in its quest to find a center fielder, but in the end, they made a move for Leonys Martin, giving up an intriguing shortstop prospect to get him from Detroit. Martin has bounced back well after a nightmare 2017 season offensively. He’s also a strong defensive player, so the Indians did well to fill the void in their injury-plagued outfield.

Back to the Desert

The Marlins have shipped veteran reliever Brad Ziegler to Arizona, the place he called home from 2011 to 2016. Ziegler has been solid if unspectacular this season, but he’ll add even more depth to an Arizona bullpen that already has the lowest ERA in the National League. The same is true of Jake Diekman, who the Diamondbacks got from the Rangers on Tuesday. He’ll give Arizona’s bullpen an extra lefty. Of course, with some injured starters, the Diamondbacks will be leaning on their bullpen during the stretch run.

Speaking of bullpens, the Mariners added to theirs by acquiring both Zach Duke and Adam Warren in separate trades. Seattle GM Jerry Dipoto is no stranger to making trades, so the fact that he pulled off a couple moves before the deadline was not a surprise. Warren has an impressive 2.70 ERA with the Yankees this year, so he could be a key setup man in front of closer Edwin Diaz. Duke, meanwhile, is putting together another solid campaign and gives Seattle another lefty out of the bullpen. Just for good measure, the Mariners also added Cameron Maybin a couple hours before the deadline, adding a little speed and depth to their outfield.

It’s been a long time since the Braves were in a playoff race, but they managed to pull off a couple minor trades. First, they acquired AdamDuvall from the Reds, giving them a little pop coming off the bench. Atlanta has nabbed starter Kevin Gausman and injured reliever Darren O’Day from the Orioles to give their young pitching staff some experience and depth.

After landing J.A. Happ last week, the Yankees got another pitcher on Monday, acquiring Lance Lynn from the Twins. Lynn has a disappointing 5.10 ERA in 20 starts this season. However, the Yankees figure to use him out of the bullpen after giving up Warren. Lynn could also step into the rotation if the Yankees suffer an injury there, making this trade all about adding depth.

The Nationals ended up being sellers at the deadline, sending reliever Brandon Kintzler to the Cubs. That move doesn’t exactly mean Washington is giving up, but it doesn’t show a ton of confidence. Meanwhile, after adding Cole Hamels to their rotation, the Cubs now add Kintzler to their bullpen, a move that was needed with Brandon Morrow on the DL.

With Dustin Pedroia unlikely to return this season, the Red Sox have gone out and acquired second baseman Ian Kinsler from the Angels. The 36-year old Kinsler has continued to see a decline in his numbers this season, hitting just .239 with an OPS of .710. But he’s still a viable second baseman and a veteran presence with over 30 games of postseason experience under his belt on an otherwise young Red Sox roster.

Just Under the Wire

Right before the clock struck 4:00, the Brewers managed to snag Jonathan Schoop from the Orioles. The Brew Crew has been unhappy with their middle infield production all season and this figures to help. However, with Mike Moustakas landing in Milwaukee last week and Travis Shaw being forced to move to second base, Schoop will play shortstop, a position he hasn’t played with any regularity since he was in the minors.

We’ll close with the biggest trade of deadline day, which was ChrisArcher going to the Pirates. Pittsburgh has quietly snuck back into the playoff picture recently, and now they’re going for it with the addition of a frontline starter like Archer. Keep in mind that Archer is not a rental, so he figures to lead the Pittsburgh rotation for a few more years, even if he can’t help them reach the postseason in 2018.