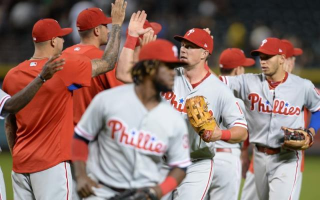 The Philadelphia Phillies find themselves in a battle for the NL East division title as the season approaches its end. For the New York Mets, they are just trying to get through the rest of the season. Heading into Sunday, the Phillies find themselves ½ game back of the Atlanta Braves for the division lead. The Mets, they are 15 games back. Despite the discrepancy, the two teams have split the first four games of this series and each will be looking for the series win. On Sunday, the Mets (53-69) will travel to BB&T Ballpark to take on the Phillies (68-55). New York will be sending out lefty Jason Vargas (2-8, 8.10 ERA) to take on the Phillies’ Nick Pivetta (7-9, 4.37 ERA). First pitch is scheduled for 7:08 pm ET.

The moneyline for Sunday night’s game is set at the New York Mets +178 and the Philadelphia Phillies -189. The over/under for runs scored is set at 9.

Phillies Looking For Positives As The Season Winds Down

This has certainly not been the season that the Mets had anticipated when they penciled in Jacob deGrom and Noah Syndergaard as their top two stars. Nevertheless, the Mets have not lived up to expectations and will most likely be watching October baseball from home. Still, they hope to play spoiler down the road, especially for some of their NL East division rivals. To try to play spoiler on Sunday, New York will send out Jason Vargas to the mound. On the season, the southpaw has a 2-8 record with an 8.10 ERA, 1.78 WHIP and opponents are hitting a ridiculous .329 against him. In 53.1 innings, he has struck out 44, walked 23 and has allowed 13 home runs. The most appalling stat of his is that he has allowed 72 hits in those 53.1 innings. Despite the rough numbers, he did not pitch awful in his last outing. In a 6-3 loss to the Orioles, Vargas went 6 innings, allowing 2 earned runs and striking out one.

Offensively, AustinJackson has been swinging a pretty hot bat over the last 30 days. Over that time, he is hitting .378/.418/.568 with a .985 OPS. He also has 6 doubles, 1 triple, 2 home runs, 10 runs batted in and 10 runs scored in that time. While he has swung it well as of late, on paper the Mets lineup doesn’t look too intimidating. Despite that, they were still able to explode for 24 runs in the first game of the series on Thursday. They won that game 24-4, but turned around and lost the second game of the doubleheader that evening.

Phillies And Braves Will Battle Down The Stretch

For both the Philadelphia Phillies and Atlanta Braves, most people expected that they would start trending in the right direction, but not many expected them to be competing for the division lead on August 19th. Despite that, they have been consistent on all sides of the field all year long. On the offensive side, it has been a lot of fun to watch what Rhys Hoskins is capable of over the course of a full year. This season he is hitting .257/.369/.510 with a .878 OPS. He has 25 home runs, 77 runs batted in and has scored 71 runs. He leads the team in both the home runs and runs batted in. With talent around him, the Phillies lineup is surprisingly potent.

Phillies Take The Series On Sunday

I don’t love the pitching matchup on either side, but I really don’t like it for the Mets. Jason Vargas is a seasoned veteran, but he just is not the quality pitcher that he use to be. I think that the Phillies will get to him early and often in this one and will get into the Mets bullpen pretty early. While I don’t expect Pivetta to go long, I do think he will have a better showing than Vargas. Take the Phillies at -189.