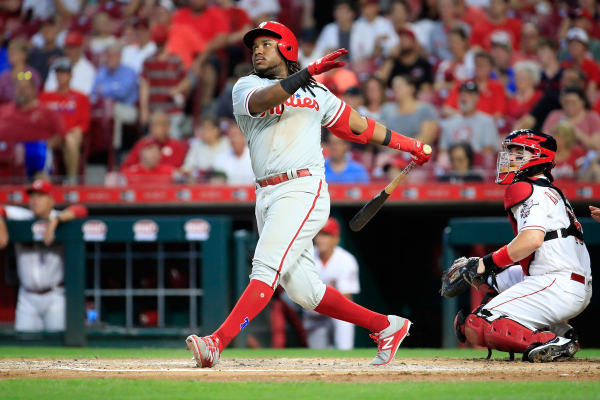 Trade deadline is upon us. The day where teams decide whether they are contenders or pretenders. While much of the attention throughout the early part of the day will be on possible trades, two contenders, the Philadelphia Phillies and Boston Red Sox, will be eyeing the second game of a short two game series as both are focusing on the push for the playoffs over the last third of the season. After Boston took the first game, 2-1 in 13 innings, the Phillies (58-48) will look for a split as they travel to FenwayPark to take on the Red Sox (75-33). For the Phillies, Jake Arrieta (8-6, 3.45 ERA) will be taking the mound against the Red Sox lefty, Drew Pomeranz (1-4, 6.91 ERA). First pitch is scheduled for 7:10 pm ET.

The moneyline for Tuesday’s game is set at the Philadelphia Phillies +141 and the Boston Red Sox -151. The over/under for runs scored is set at 10.

At the beginning of the season, everyone expected that the Washington Nationals would walk away with the division. With only about a third of the season left, the Phillies and Atlanta Braves are proving everyone wrong. Going into Tuesday night, the Phillies currently have a ½ game lead over the AtlantaBraves. Knowing that it is going to be a wild ride to the end, the Phillies have looked to shore up any weaknesses as the trade deadline looms, and have already made one deal, acquiring infielder Asdrubal Cabrera from the Mets. On the season, Cabrera is hitting .270/.331/.424 with a .755 OPS. He has 18 home runs, 58 runs batted in and 48 runs scored.

While he has gotten off to a bit of a slow start with the Phillies in his first three games, they hope he can help make their already tough lineup a little deeper.

At 75-33, the Red Sox have the best record in all of baseball. They have a potent lineup, fearsome pitching staff and a solid bullpen. While they are still trying to solidify that solid bullpen with a trade, they did shore up one area Monday night by trading for Ian Kinsler. With DustinPedroia out with an injury, Ian Kinsler gives them some much need stability at second base and another veteran presence. While he started off slow, Kinsler has been especially hot over the last 30 days. In that time he is hitting .320/.393/.467 with a .860 OPS. Over that stretch he has 2 home runs, 10 runs batted in and has scored 15 runs. Going to a much stronger lineup, those numbers will likely improve.

On the mound for the Red Sox Tuesday will be lefty Drew Pomeranz. On the season, he is 1-4 with a 6.91 ERA, 1.82 WHIP and opponents are hitting a whopping .310 off of him. In 41.2 innings, he has struck out 40, walked 23 and allowed 9 home runs. He will be making his second start since coming back from left biceps tendinitis, but if he can’t show signs of life quickly, he may not be long for the starting rotation. In his last start, a 7-6 loss to the Orioles, he went 4.2 innings, allowing 4 earned runs and striking out 4.

It is really tough picking against the RedSox, but I don’t know if Drew Pomeranz can right the ship on Tuesday. He has been shaky most of the season, and his first start off the disabled list didn’t inspire too much. I am not a huge fan of Jake Arrieta these days either, particularly as he no longer is the dominant strikeout pitcher that he was with the Cubs. Instead, he has had to learn how to “pitch” as opposed to just trying to throw it by everyone. With that in mind, I think he will be able to keep the Red Sox off balance enough to give his offense a chance to secure the victory by putting up runs. I expect runs on both sides, but I am going to take the Phillies in this one. Take them +141.