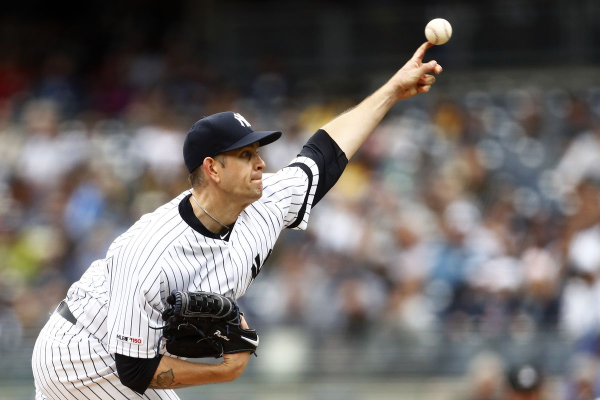 We have a 15-game slate tonight, and that means that we have a ton of options to choose from. Each site has slight variants in pricing that I will touch on if they pop up, but things seem relatively similar across all sites tonight. On a slate this big, you do not need to be super different to win a tournament because ownership appears to be really spread out among different pitchers and stacks. On a slate this big, you want to attack pitching heavily, so that will be the main focus.

At the top of the slate, I believe that two pitchers are pretty clearly the top plays in Patrick Corbin and James Paxton. Both pitchers profile pretty similarly overall, but there are some pros and cons to both pitchers and matchups. I think that Corbin and Paxton have relatively similar upside on this slate when you look at their stuff and the opponents’ abilities. The White Sox are a more threatening offense than the Mets from a power perspective, but they also strike out more.

On the other hand, I think that Paxton has slightly better strikeout stuff than Corbin. Since Paxton is still coming off of an injury, I would probably advocate for Corbin in cash because of the strikeout floor that the White Sox provide. Even if they do produce some power, Corbin will get Ks to mitigate the effect that has on his final line.

I prefer Paxton in GPPs because he is slightly cheaper on most sites, he should be about 5-10% lower owned, and he has elite upside in any matchup with some of the best strikeout stuff in baseball.

Just below these two pitchers, you will see Kenta Maeda and Trevor Bauer. I have no interest in Maeda because the Angels lineup lacks the strikeout upside that I am looking for, especially when Maeda struggles to go deep into games.

Bauer is interesting because he has elite stuff, but the location this season has been bad. Bauer has allowed a lot of barrels early on in the season, and I think that is enough to get me to go to the more expensive options.

The mid-tier pitching options are really not good on this slate, and I prefer to spend down if I am not playing the guys mentioned above. The next guy that I have true interest in is Jakob Junis. Junis has power issues, but he is in a big park vs. a Detroit team that lacks powerful bats. I think Junis has the ability to strike out a guy an inning over a pretty clean start.

All of these players are price plays on different sites, but I think they are viable if you can get the right price.

John Means is not that bad, but his price is on most sites. If you can get Means for cheap in any regard, I don’t mind it, but I don’t like the prices on DK or FD tonight.

There are three pitchers down here that I could see rostering on tonight’s slate, and I think I will eventually have a lot of these three guys, depending on the site. Darwinzon Hernandez is taking the mound for the Red Sox tonight, and I have never seen a pitcher with minor league stats like this kid. My biggest concern here is the pitch count.

Darwinzon is much cheaper on Yahoo and FanDuel relative to other players, but he does possess elite upside in my opinion. He possesses an elite fastball and a plus curveball, but that is basically it. In 40 innings in Triple-A this season, he has struck out 13 batters per 9 innings. That is incredible.

However, he has only thrown more than six innings once in nine starts, and that is because he is walking over 7 guys per 9. That is horrible. Most projection systems have Hernandez as a 9K and 6BB guy per 9 in the major leagues. That would provide upside, but the walks are terrifying.

The other Hernandez, Elieser, is an interesting option, but I think he will be popular vs. a solid Cardinals lineup. Hernandez is a bad prospect, but his strikeout numbers in the minors have skyrocketed this season. It is really hard to tell if that is for any particular reason with a lack of information from Triple-A ball, but it might be worth the risk at $5000 on DraftKings.

If you want a safer and less interesting play, I like Dakota Hudson. Hudson is a fine pitcher getting a park upgrade vs. a bad offense. I would expect a solid start that will allow you to get elite bats and not kill you in cash or GPPs.

My favorite five stacks based on ownership and expected production/value are as follows:

Nationals: The White Sox starter and bullpen are both BAD.

Cardinals: Leverage over heavily-owned Hernandez if he is still the same pitcher as he was last season.

Rockies: Jose Quintana is respectable, but his best pitch is a curveball, which does not work as well in Coors.

Cubs: Struggled vs. Lambert last outing, but seeing a pitcher in back-to-back starts helps the offense, and they are now in Coors Field

Yankees: Jason Vargas has an xFIP of 5, but has run into some fantastic luck. I expect the Yankees’ power to be under-owned.