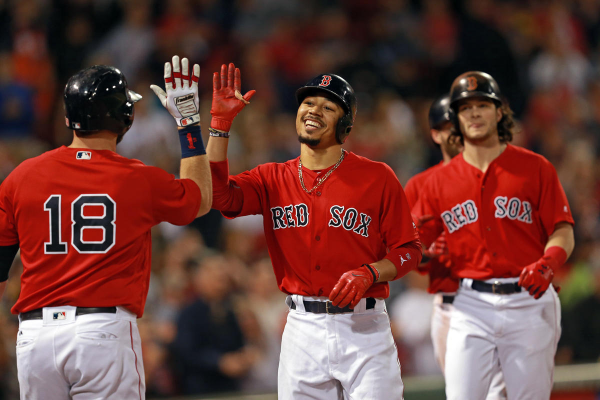 Two of the best teams in baseball are set to square off for a four game series this weekend. The Boston Red Sox will travel to the great northwest to take on the surprising Seattle Mariners. Boston got off to a red hot start to the 2018 season, but the Mariners are perhaps the hottest team in baseball at this point in the season.

The Red Sox were expected to challenge the Yankees in the AL East this season, and that is exactly what has happened to this point. Seattle has surprised everyone by taking over the American League West division, which was supposed to be controlled by the Houston Astros. The Boston Red Sox are -130 over the Mariners in the series opener on Thursday.

The 2010 Cy Young award winner, Felix Hernandez, will make the start for the Mariners in the series opener. King Felix has long been considered the ace of the Mariners staff, but James Paxton has taken over that role now. Hernandez is just 6-5 with a hefty 5.70 ERA in 2018, but still has terrific stuff.

When Robinson Cano began serving an 80 game suspension for the use of performance enhancing drugs, many people wrote off the Mariners. Instead, Seattle has responded by playing terrific baseball and overtaking the Houston Astros in the divisional race. Mitch Haniger has provided the power in Cano’s absence, and leads the team in both home runs and runs batted in.

Boston Offense Wears You Out

The Boston Red Sox offense is relentless, and continues to wear out opposing pitchers this season. Mookie Betts leads the Red Sox attack and his .354 batting average is tops in the American League. Betts gets things going for Boston, but he has plenty of thunder batting behind him, including J.D. Martinez. Martinez has picked up where he left off after a breakout 2017 season, and has hit 21 home runs.

The back end of the Boston bullpen is another huge strength for the team. Craig Kimbrel ranks second in the American League with 21 saves on the season and sports a 2.48 ERA. The Red Sox offense gets the team a lead, and the bullpen has been able to shut the door. The RedSox will try to use the same recipe against the Mariners.

The Red Sox offense got off to a hot start this season, and they have not cooled off since. Betts and Martinez lead the charge, but the Boston lineup is deep and very talented. David Price will start for Red Sox in the series opener, and he is usually just good enough for Boston. Look for the Red Sox offense to carry them to a series opening win. Bet the Boston Red Sox -130 over the Mariners.