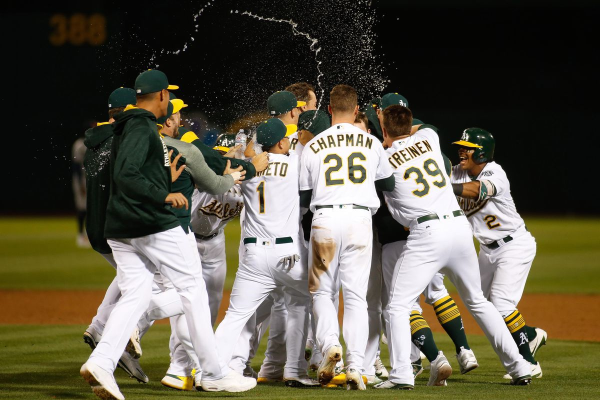 The Oakland Athletics are starting to be tested. After having a remarkable August, one that has seen them go 17-9, the A’s have now lost two games in a row after losing two key members of their rotation. Both SeanManaea and Brett Anderson have hit the disabled list, with serious concerns that Manaea will be able to pitch again this season.

After losing their series to the Astros, the A’s sit 2.5 games back in the ALWest but still have a wild card spot in their grasp. For the Mariners, they are trying to get back into contention. After a rough month going 12-15, the Mariners are trying to make one last push for a playoff spot. Currently, they sit 4.5 games back in the wild card but can make up ground with wins over the Athletics this weekend.

The two will match up for the second game of the four-game series on Friday. After taking the first game, the Mariners (75-59) will look to take the second game as they travel to the Oakland-Alameda County Coliseum to take on the Athletics 80-55. Mike Leake (8-8, 4.03 ERA) will take the mound for the Mariners to face off with the Athletics’ Mike Fiers (10-6, 3.15 ERA). First pitch is scheduled for 10:05 pm ET.

The moneyline for Friday night’s game is set at the Seattle Mariners +138 andthe Oakland Athletics -148. The over/under on runs scored is set at 8.

If the Mariners are going to make a move in the standings, this is the time to do it. They have a four-game set against the A’s this weekend and, if they were to sweep, could be as close as 1.5 games behind by the end of Sunday. To try to get the second game, they will send out righty MikeLeake.

MitchHaniger has continued to swing a hot bat as of late, particularly hitting out of the leadoff spot. In his last 30 days, he is hitting .336/.387/.549 with a .936 OPS. In that time he has 5 home runs, 15 runs batted in and has scored 19 runs. The lineup also features several players who have had success against Fiers in their careers. Robinson Cano, Ben Gamel, Cameron Maybin, Kyle Seager and Jean Segura have all homered off of him, with Cano and Maybin going deep twice.

While the Athletics are thrilled to be in a playoff spot, they would love to overtake the Houston Astros for the division lead. At 2.5 games out, they let a great opportunity slip through their fingers when they lost 2 of 3 to the Astros, but will look to get back on track Friday. To do so, they will look to Mike Fiers.

Jonathan Lucroy and Matt Chapman are two players to watch against Mike Leake. In his career, Lucroy is hitting .500 against Leake, with 2 home runs and 8 runs batted in in 40 at-bats. For Chapman, he is hitting .364 in 11 at-bats with a home run. KhrisDavis also has a home run against the righty.

Athletics Even The Series

Even though they have taken a real blow with some of the injuries, the Athletics are still sizzling hot this month. With Fiers showing ace-like stuff since being acquired and the offense clicking, I have a hard time seeing them lose three in a row. The Mariners may have gotten them in game one, but I thoroughly expect the Athletics to take game two. Take them at -148.