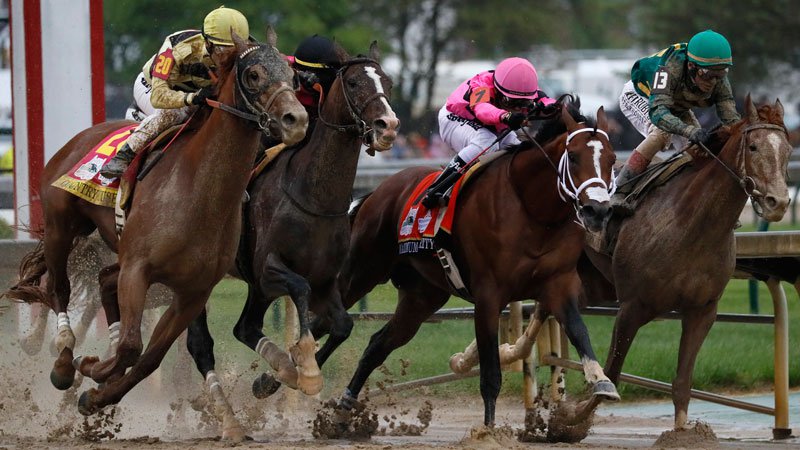 Famously in 2005 TVG personality Ken Rudolph touted a longshot named Giacomo. The horse stunned the field mowing down the leaders in the stretch and winning at 20-1. Rudolph’s reaction has become one of TVGs most watched clips online and embodies part of what makes the Kentucky Derby such an enticing wagering event for so many bettors.

Due to the large field size and lightly raced nature of the horses, the Derby has frequently returned favorable prices. This has made it a relatively unpredictable event in the eyes of most bettors. In the years from 1993 through 2012 the Derby winner paid out on average odds of nearly 15-1. However, since the 2013 Kentucky Derby the average odds of the first horse across the wire have been about 4-1.

What happened? Where has all the value gone? The answer lies in the Road to Kentucky Derby Series. This series changed how horses qualify for the first Saturday in May.

Qualifying for the Kentucky Derby Before 2013

Prior to the Road to the Kentucky Derby points system, horses qualified based on their earnings in graded stakes races. The problem with that system is that there is a multitude of these races available across the country. For example, a horse could find a 3-year-old turf sprint that was graded and cash on the earnings. A turf sprinter is almost assuredly not going to take to the mile and an eighth classic distance on dirt. This was of little concern to the connections who wanted the thrill of having a horse in the Kentucky Derby.

Another issue was that it penalized late developers. Precocious two-year-olds could lock in a post long before other horses even hit the race track. If a horse won a 2-year-old graded stakes race at Delta Downs they often had enough money to qualify for the Derby even if they didn’t run a step for the next six months Since horses are rapidly developing in their two and three-year-old seasons, this meant that some of the best horses on Derby day didn’t have a spot in the race.

Implications on the Race

The original system created a truly puzzling mix of horses. Maybe a trainer needed a specific setup to win the race for his top contender and scrambled a quick two-year-old to be in the race as a rabbit to soften up the pace.

Perhaps a horse woefully incapable of getting the distance just tried to run as fast as they could at the front for as long as they could and then just hoped to hang on for a piece. Regardless, the racing was often chaotic particularly as cheap speed would start to melt on the front end. This meant winning the Derby was usually more about trip and less about talent.

The Road to the Kentucky Derby Series

In 2012 Churchill Down’s conducted research and found that over 80% of fans couldn’t explain how horses even got to the Derby. Creating a points system allowed for a much clearer picture for fans. This is especially important since many may tune in to horse race only once or twice per year.

Furthermore, it allowed for prep races to carry different weights which would produce a better quality of field for the race. To achieve this the races in March and April prior to the Derby were given the most points to allocate ensuring that the best horses could get to the gate.

In 2013 The Road to the Kentucky Derby was officially implemented as a series of races awarding points to the top 4 finishers. If a horse wants to run on the first Saturday in May, they now have to be improving at the right time and prove it in select races on dirt against the top horses in training.

Implications on the Race

Almost overnight the Derby preps became extremely popular races across the country with fuller fields and better racing. While this has not been the case in every prep every year, it has allowed Kentucky Derby season to extend beyond just the first Saturday in May marketing to casual fans by advertising possible horses of interest in their final preps before the “Run for the Roses.”

As for the Derby itself, the result has undeniably produced more formful finishes to the race. This is evident by the dramatic drop in odds of the winner and recent trends in the race.

Trends Since the Introduction of the Road to the Kentucky Derby

Undeniably the Kentucky Derby was exciting for players who loved to load up win bets on their favorite longshot hoping for a big score. However, that gimmick seems to largely be a thing of the past. So what to do now? Is there any value to betting the Kentucky Derby if Essential Quality is going to win at a short price? The answer is yes.

Horse racing offers one of the most diverse wagering menus in all of sports. Along with win, place, and show bets, there are horizontal wagers. These include the pick 3, pick 4, and pick 5 where you have to pick the winner of multiple consecutive races. These bets can provide especially good value because the pools leading into the Kentucky Derby are monstrous. In turn, even predictable sequences can produce relatively good value.

Another, and probably the most popular way to make a big score is vertical wagers such as the exacta, trifecta, and superfecta. In these bets, you must select the top 2, 3, or 4 finishers in order. This may seem like a daunting task, but if you are confident in the winner, a good betting strategy can help you unlock potential value.

Vertical Exotic Payouts on the Minimum Wager Since 2013

While these payouts were greatly inflated by Country House’s DQ victory in 2019, these vertical wagers have been a relatively cheap way for betters to find incredible value even if they do think the favorite is the most likely winner.

Knowing the potential value that lies in the vertical exotics it is important for horseplayers to know how to make these bets fit their opinion. In general, there are 3 ways that players tend to attack these types of bets.

For the purpose of this article, we examine the trifecta, but the same principles can be applied to the exacta and superfecta.

In this strategy, the player must be totally correct. The #1 horse must finish first, the #2 must finish 2nd, and the #3 must finish third. This is not easy to hit in a 20 horse field, but the advantage is that it can be as cheap as the minimum bet. In the case of the Trifecta, you could play the race for just $.50!

The slashes which indicate placing in the straight trifecta are now commas. This signifies that you have purchased a ticket on each combination of the 1,2, and 3 horses.

Now you win if 1,2, and 3 are the top three horses no matter what order they come in. The trouble with this bet is that is inefficient and gets expensive quickly since you buy each possible ticket. A three-horse box is $3 for a $.50 wager. This is because there are 6 different ways those three horses can be the top three finishers.

If you add a 4th horse you get the benefit of having one horse that can be terrible and still win. The challenge is that it will now cost $12. This bet can get expensive really quickly and doesn’t give any preference to the horse you think has the best chance of winning.

The key is a hybrid between the straight bet and the box.

In the example above, the bettor is wagering on horses to finish in particular spots like the straight bet. However, he includes more coverage in the other spots like the box. This bettor has “keyed” the 1 over the 2,3. This means that the #1 must come in first, but the #2 and #3 can take second and third in any order.

While the above example only had two horses in second and two in third, players can add more to each of these spots. For example, the player could key 1 horse over their next two choices over their next five choices.

By keying the winner, the player can spread their money more efficiently in the less predictable spots of the wager. This wager works great if you like a shorter price to win, but you also have a couple of long shots you think could hit the board.

Not Feeling Confident About What to Bet Yet?

Betting News will continue to provide updated coverage of the Kentucky Derby and the participants in the coming weeks. Don’t forget to check back the week of the race for picks and betting strategies for every bankroll.