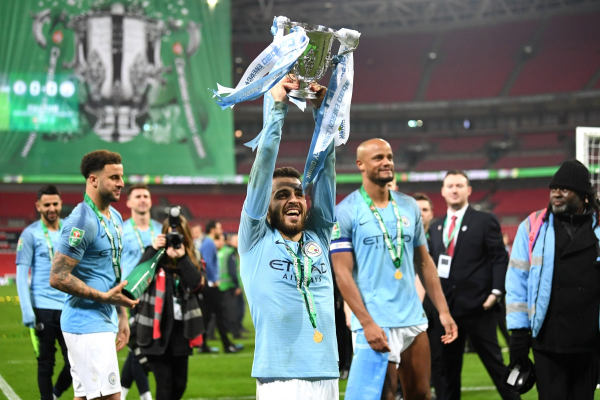 With July almost over, the dramatic and heart attack inducing world cup at an end, in the global world of soccer, that means just one thing. The Premier League is returning! Kicking off in just over 2 weeks, the EPL is the arguably ultimate stage for club football, with players from around the globe at their teams reporting for duty. After a slow off-season, trades and deals have been ramping up in recent days, which is affecting the betting odds for the most wagered on sporting league in the world. Lets take a look at some of the main contenders…

Manchester City – Opening as 4/6 favourites, or 1.67 or -150 if you prefer the alternate way of listing the prices, Manchester City are the most feared outfit in the EPL for some time. As 19 point winners last season, with the title ultimately decided months before the end of the year, other teams will struggle to close the gap. With transfer window moves for players of huge star quality, such as Riyad Mahrez joining from Leicester City, and depth at Centre Back coming in the form of Philippe Sandler, a 21 year old Dutch prodigy, their speed of attack and strength at the back seem to be second to none on the global team stage. Will this translate into league, and ultimately Champions League, success? If this year isn’t their year, with other super powers of the club stage losing star players, then will it ever happen? On the domestic front however, this price is very fair from Bet365 for a repeat of last years title winning triumph.

Liverpool – 4/1 or 5.0 or +400. Many peoples pick for this year, Liverpool looked strong in attack with a multitude of high scoring games, but it came at a cost with a bad defensive record. We all saw the Champions League final, defensive frailty and bad goalkeeping allowing Real Madrid to hit the three-peat of titles. World-class manager Jurgen Klopp is no fool however, and made adjustments over the summer break to shore up his defence. Adding a world class goalkeeper in Brazil’s Alisson, to g along with Nady Keita and Fabinho as 2 fantastic midfielders, and even Shaqiri, the Swiss play maker to give them even more options in a lethal attack. If Liverpool can slow teams down when on defence, with their pure speed and deadly finishing on the counter attack, no-one would be surprised if Liverpool can make a strong run at a first ever Premier League title. Each-way for a top 3 finish is the better play here, as with other teams having new managers and losing players, Liverpool should only gain ground in the 2018-2019 Premier League

Manchester United – 7/1, 8.0 or +700. Some people are saying the fall from grace is imminent on the red side of Manchester. Some blame the manager Jose Mourinhio, and some a lack of skill in the transfer market. Whichever is true, one face remains. Manchester United are the most prolific winners int he history of the English Premier League, and Football in the UK in general. The pedigree started by Sir Alex Ferguson remains, the ground is iconic, and the sheer name coming up on opponents fixture lists, either home or away, is still the toughest in the calendar. Manchester United just know how to win, even if they have a relapse from time to time.

This year will be a struggle to keep up with their Mancunian neighbours, but they have signed Brazilian Fred to help out in the crucial midfield areas, and a defensive wing back from Porto, who while young, has shown such potential that he could be a future star. And when it comes to Manchester United signing young Portugese players, you only have to look as far as a certain Cristiano Ronaldo to know that they are aware of the pedigree of the Portugese starlets. Manchester United are a good outside bet this year, with the best goalkeeper in the world between the posts, and superstars such as Romelu Lukaku and Alexis Sanchez proving the goals. If Marcus Rashford and Scott McTominay can continue their home grown skills, and grow with the club and mould their own future, then maybe this is the year the Reds return to the top of the tree?

Chelsea at +110 and Tottenham Hotspur at +1500 are notable options, but can they improve enough to catch the bigger names this year? Im not too sure, but we do know one thing, the Premier League is back, and the most viewed sports league on earth will, once again, bring world class entertainment to all of us.