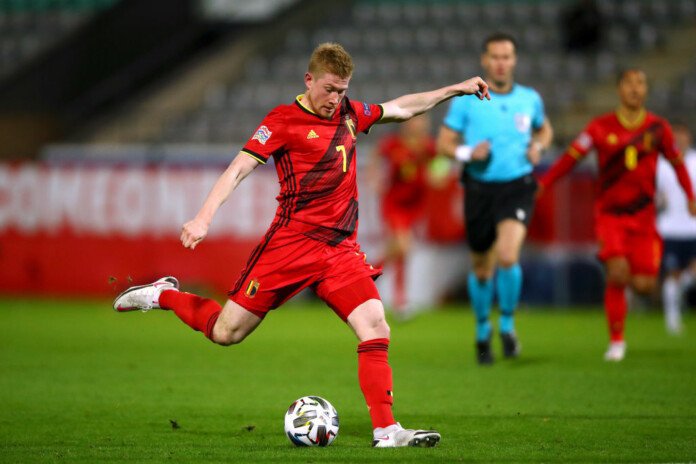 Euro 2020 Group B is where one of the leading tournament favorites resides, but that doesn’t mean that it will be a cakewalk for Belgium. Big things are expected of a talented Belgium squad, which finished third at the 2018 World Cup and is the top-ranked team in the world. But can Denmark and Russia test them in the group stage?

Here is our look at Group B, and be sure to check out our other Euro 2020 group previews and content.

Odds to Win Group B

For Belgium, the lingering question is how, or if, injuries will affect their pursuit of a long-awaited title.

Belgium will open the tournament tomorrow against Russia without star midfielder and vice-captain Kevin De Bruyne, who suffered facial fractures in Manchester City’s Champions League final loss to Chelsea almost two weeks ago. Also, midfielder Axel Witsel, who has made 110 appearances for his country, has not returned to full fitness after an Achilles injury.

But Belgium’s squad is deep and should be able to survive. It doesn’t hurt to have one of the world’s best strikers in your squad, as Belgium does in Inter Milan (for now) star Romelu Lukaku. Lukaku has 60 goals in 93 appearances for Belgium, and his 24 goals and 11 assists helped Inter dominate Serie A this past season.

Captain Eden Hazard had a tough season with Real Madrid, but this could be an opportunity for him to remind the world of his brilliance. As the saying goes, form is temporary, but class is permanent.

Best Bet: Belgium to pick up seven (+275) or nine (+333) points in the group stage both have great value, and you can turn a decent profit even if you take both. Will De Bruyne be able to play against Denmark? That should be their toughest match, and his availability could be key to breaking down a difficult opponent.

It might be a strange sight to see Denmark at +2500 to win Euro 2020, but this is certainly a team to watch out for. Their squad doesn’t match Belgium’s in terms of quality depth from top to bottom, but Denmark has lost only twice in 28 matches dating back to 2018.

Those two losses? Both are to Belgium in UEFA Nations League action last year. If Denmark can get a positive result against Belgium this time around and edge them for top spot in the group, watch out.

Best bet: Denmark to score over 4.5 goals (-115) is solid value. In their last 28 matches, Denmark has failed to score only five times–twice against Ireland and once apiece against England, France, and Georgia. It all hinges on if they dominate Finland as they should in their final group match.

It’s always great to see new nations on the international stage, so Finland qualifying for a major international tournament for the first time is quite the story.

But don’t look for them to make much noise during their stay in the tournament. Finland enters Euro 2020 winless in their last six matches, and there really isn’t a lot to write home about in their squad. They do have an accomplished scorer in Norwich City’s Teemu Pukki, however. Pukki led the Canaries back to the Premier League at the first time of asking with 26 goals, and he has 30 goals in 91 appearances for Finland.

Best Bet: Finland to pick up zero points (+200). They are listed as pretty clear underdogs in all three of their matches, but this one should come down to next week’s match against Russia. A draw vs Russia (+275) comes at a better price than taking Finland to record one point (+225), so going that route to hedge would be a worthwhile option to cover yourself with.

Can Russia have success on home soil again? They made a run to the 2018 World Cup quarterfinals as the host country, losing out to eventual finalists Croatia in penalties.

Unfortunately for Russia, their final group match against Denmark is in Copenhagen and not in Saint Petersburg. Still, even if they finish third in Group B, there’s a fair chance they will end up as one of the four third-place teams to move on to the round of 16. With goal difference potentially being a factor, the aim needs to be to avoid disastrous results against Belgium and Denmark and light up Finland.

Captain Artem Dzyuba, who calls the Krestovsky Stadium home on the club level, is the man to keep an eye on. Dzuyba, who has 29 goals in 52 appearances for Russia, scored three goals at the World Cup three years ago. He led the Russian Premier League with 20 goals this past season as Zenit Saint Petersburg won the league title, and he has three goals in five international appearances in 2021.

Best Bet: Dzyuba to be Euro 2020 top goalscorer (+6600). This obviously hinges on whether or not Russia go deep in the tournament. But given how much of a focal point he is for Russia, the fact that they should reach at least the round of 16, and the presence of a fairly weak Finland side in their group, he could easily be in the mix for tournament top scorer. At these odds, throwing even just a small amount on this bet could net a nice return.