Rivera Named Coach In Washington; Can Redskins Compete In 2020? 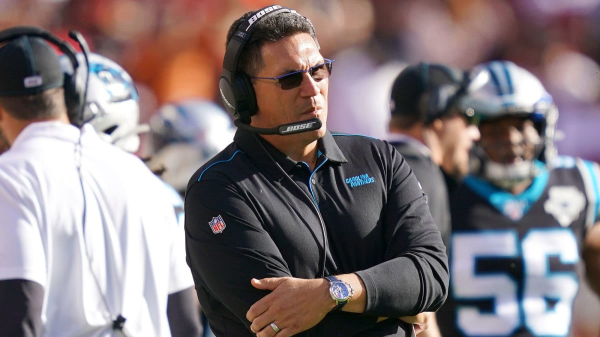 It feels like a lifetime ago that the Washington Redskins fired Jay Gruden after an 0-5 start in his sixth season in charge. Now, there’s a new boss in town.

Owner Dan Snyder has officially hired former Carolina coach Ron Rivera to lead his football team. Of the decision to bring in Rivera, Snyder said, “After several meetings with Coach Rivera, it was clear he is the right person to bring winning football back to Washington, D.C.”

Because of his experience and resume in charge, Rivera has been considered one of the best candidates of this year’s coaching carousel after being let go in Carolina in early December after accumulating a 5-7 record this season.

The Rivera-Del Rio pairing could be the exact sort of change needed for a Redskins team that’s placed third or worse in the NFC East in each of the past four years and is now coming off a 3-13 season.

When making the decision of who would serve as the next head coach in Washington, Snyder would have paid close attention to what Rivera was able to do when he took over in Carolina.

The year before Rivera was named head coach of the Panthers, the team went 2-14. Three seasons later, Carolina was a winning football team that could boast a record of 12-4 and a new attitude.

The greatest milestone of Rivera’s time in charge of the Panthers is guiding the Cam Newton-led team to the Super Bowl after a 15-1 season in 2015. Carolina fell to Denver by a score of 24-10 and would fail to make it back to the sport’s biggest game.

Although Carolina only had three winning seasons with Rivera in charge, they were able to reach the playoffs four times and won the NFC South three times in a row.

Prior to his time at the helm in Carolina, Rivera was the defensive coordinator for both the Bears and Chargers. In that role, Rivera helped Chicago reach a Super Bowl.

Rivera will now be Snyder’s seventh head coach in Washington, and one that feels like a no-brainer appointment. On top of Rivera’s winning record, fans of the Redskins will be happy to bring in an accomplished coach who isn’t afraid to take chances.

Part of the problem was the fact that 12 players aged 25 or younger were regular starters at season’s end, but Washington knows it needs Rivera to come in and implement a strategy that makes better use of the talent it has.

On the bright side, the Redskins saw some good things out of rookie quarterback Dwayne Haskins, who Rivera will likely be handcuffed to in the first couple of years. Washington also saw great things from rookie receiver Terry McLaurin, who caught 58 balls for 919 yards and seven touchdowns in 14 games.

But perhaps the most appealing part of taking this job for Rivera is the fact that Washington owns the second overall pick in this year’s draft.

With the talent available, Rivera could easily find a cornerstone of his defense for years to come by selecting the likes of Ohio State defensive end Chase Young.

The Bengals own the top pickand are likely to go after a quarterback. Young, who many consider to be the best overall player in the draft, would then be available for Rivera and the Redskins.

Right now, LSU quarterback Joe Burrow is the heavy favorite to be selected No. 1 overall with odds of -1150. Young holds the next-best odds at +550, followed by Alabama quarterback Tua Tagovailoa at +1200.

If Rivera’s selection in this year’s draft and Haskins develop into NFL stars, Washington will have the makings of a contender. However, it took Rivera three years to turn around a bad Carolina team, so don’t expect the Redskins to compete for the NFC East next year.