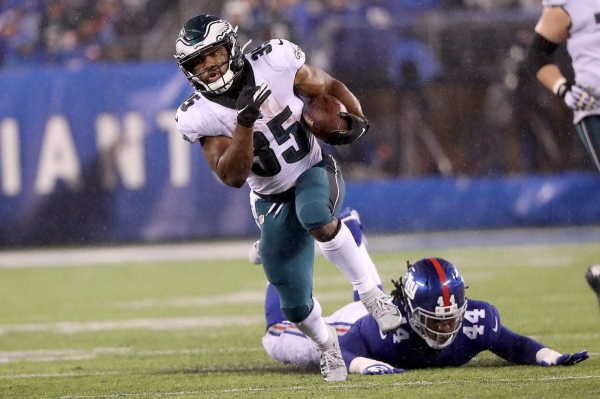 It took virtually every bit of 17 weeks for Philadelphia to secure the NFC East, but with a 34-17 win over the New York Giants on Sunday afternoon, the Eagles are finally playoff bound.

After last week’s victory over the Dallas Cowboys, the Eagles entered the final week of the regular season knowing that a win would earn them the division title and the No. 4 seed in the NFC playoffs. However, a loss against New York would have opened the door for the Cowboys to take the division with a win over the Redskins.

While Dallas was demolishing Washington, Philadelphia was having trouble putting New York away. Sunday’s scoreboard watchers saw the battle between the Eagles and Giants become tied at 3, 10, and 17 as the contest entered the fourth quarter.

On a day when Carson Wentz was just OK – 23 of 40 for 289 yards and one TD – it was running back Boston Scott who did most of the damage. On top of his 84 receiving yards, Scott rushed for 54 yards and three touchdowns.

And so, the 9-7 Eagles now enter the playoffs as the NFC East champs and will host a playoff game in the Wild Card round.

There was still much to settle within the NFC as Week 17 got underway on Sunday. On top of the NFC East title, a host of teams had a shot at the No. 1 seed, the NFC West title had yet to be claimed, and one of the eventual 13-3 teams would miss out on a first-round bye.

Finally, the dust has settled, and we can gaze upon the final picture of the NFC playoffs.

After a hard-fought game that ended on a fourth-down stop inches from the goal line, the 49ers defeated the Seahawks in Seattle by a score of 26-21 and clinched the NFC West. With that victory, 13-3 San Francisco claimed the No. 1 seed, a bye week in the postseason, and home-field advantage throughout the playoffs.

Green Bay needed a last-second field goal from Mason Crosby to get the best of Detroit, but it was enough for the 13-3 Packers to claim the No. 2 seed.

Despite its victory over Carolina, 13-3 New Orleans was only able to earn the No. 3 seed and will be hosting the NFC’s No. 6 seed in the first round.

At 9-7, Philadelphia has the worst record of any team in the NFC playoffs, but it is now rewarded with the No. 4 seed and a home game against the No. 5 seed as NFC East champs.

The Seahawks were literally inches away from taking down San Francisco and earning the NFC West title on Sunday. Instead, Seattle fell to 11-5 and will now have to travel into Philadelphia as the No. 5 seed.

Minnesota knew it would enter as the No. 6 seed and the NFC’s second Wild Card with a record of 10-6, and it will now head into New Orleans for a showdown with the Saints.

Any Chance For 9-7 Philadelphia?

While the AFC feels like Baltimore (and maybe Kansas City) and then everybody else, the NFC has always felt like a loaded conference with four or five very good football teams.

Now that Philadelphia has joined the likes of San Francisco, Green Bay, and New Orleans, does it have a shot to compete for a trip to the Super Bowl?

According to the opening odds for the Wild Card round, the Eagles have a legitimate shot at advancing in the playoffs. Right now, Philadelphia is only a 1.5-point home dog against the visiting Seahawks.

Those odds give Philly a much better chance than Minnesota, which will be going into New Orleans as an eight-point underdog.

However, that’s where the odds say Philly’s chances at making a run will end.

So, the Eagles have given themselves a shot, but they face a steep uphill battle.