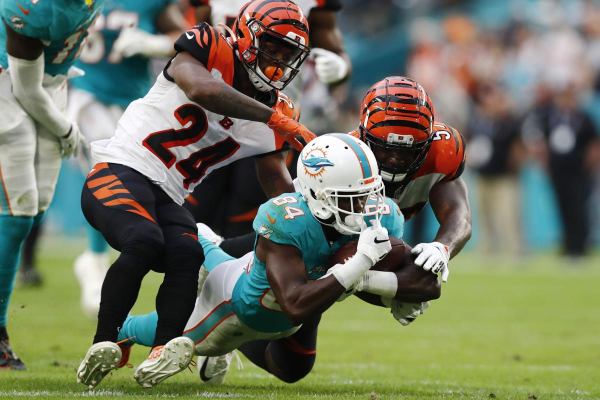 While many of the fans of the Cincinnati Bengals would have been rooting for their team to lose to the Miami Dolphins on Sunday, the team certainly didn’t roll over and give up even though a loss would earn them the top overall draft pick in 2020.

With a 23-point explosion in the fourth quarter, the Bengals tied the score at 35 and sent the game into overtime. For a moment, it looked like Cincinnati was going to fail at losing.

To earn overtime, the Bengals scored 16 points in the final 29 seconds of regulation with the rare occurrence of a successful onside kick. Yet a Jason Sanders field goal with time expiring earned Miami the win and made sure Cincinnati would be the first team on the clock when the 2020 NFL Draft comes around.

Many fans of Cincinnati were happy to see Andy Dalton throw for 396 yards, four touchdowns, and no picks, but they were even happier to lock up the No. 1 pick in the upcoming draft.

Bengals Looking At QB For No. 1 Pick

The last time Cincinnati made the first overall pick in the NFL Draft, it selected USC quarterback Carson Palmer in 2002. Will the Bengals be looking for a quarterback again this time?

According to many projections, yes.

Many analysts agree that LSU quarterback Joe Burrow has been the best player in college football all year long, and he has a Heisman Trophy to show for it. The Tigers’ star has thrown for 4,715 yards and 48 touchdowns while leading his team to the College Football Playoff.

Now, Burrow could be trading the tiger stripes of LSU for the stripes of Cincinnati.

However, Burrow isn’t the consensus No. 1 pick just yet, and the draft process for the Bengals is only just getting started.

So, who else might be considered for the top overall pick when the draft rolls around on April 23?

With the Bengals on the clock, most of the top candidates to be taken first overall are at the quarterback position.

Leading that group is Burrow. On top of all his yardage and touchdowns, the LSU quarterback has completed an astronomical 77.9 percent of his passes while securing his team the top ranking in all of college football.

Right now, Burrow is the odds-on favorite to be taken first overall by Cincinnati with odds of -400.

From the defensive side of the ball, Ohio State defensive end Chase Young is another leading candidate for the top draft pick. Why? Young is largely considered the best overall player in the draft, with his only flaw being that he doesn’t play the QB position.

With the Buckeyes this season, Young has racked up 16.5 sacks, 21 tackles for a loss, and seven forced fumbles. That kind of production has made Young the second favorite to be taken first in the draft with odds of +350.

The next two players on the list are both quarterbacks.

First up is Justin Herbert, who led the Oregon Ducks to a record of 11-2 this season. While completing 66.7 percent of his passes, Herbert threw for 3,333 yards with 32 touchdowns and just five interceptions this year.

Herbert entered the year in the discussion as one of college football’s top pro prospects, so it’s no surprise to see Herbert with the third-best odds of being taken as the No. 1 pick at +800.

After being right at the top of the discussion for best quarterback in college football all year long, a hip injury has pushed Alabama QB Tua Tagovailoa back into the pack. For his career, Tagovailoa has thrown for 87 touchdowns and just 11 interceptions.

If not for injury concerns, the Alabama QB would certainly be higher on the list of potential No. 1 picks, but for now, he’s sitting on odds of +1100.