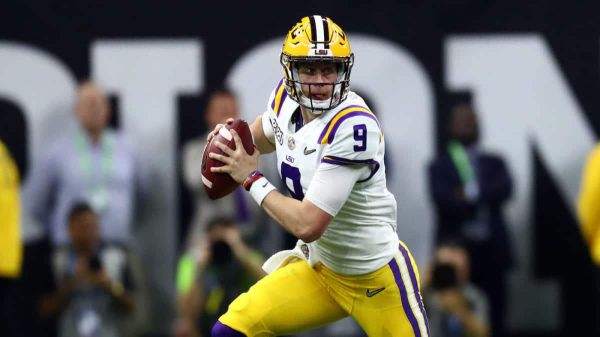 The 2019 season of college football is in the books. Now that LSU’s perfect 15-0 season is behind us, the sport begins to shift its focus towards the NFL Draft and where its most coveted players will end up.

The course of an entire franchise can be changed by the right draft pick, and we’ll surely see future Hall of Famers selected on April 23.

Let’s take a look at how the draft order stacks up before digging into this year’s top prospects.

Barring a trade, the 2-14 Bengals will kick off the 2020 NFL Draft in Las Vegas after suffering through one of the worst seasons in franchise history. A team that finished with only two wins needs help just about everywhere, but the most obvious need is at quarterback, with Andy Dalton no longer in the team’s long-term plans.

The second overall pick currently belongs to the Washington Redskins, who finished 3-13 in 2019. With Ron Rivera now at the helm and quarterback Dwayne Haskins set for his second year of pro football, Washington would be wise to help its young quarterback with help on the offensive line or at receiver.

With a record of 3-12-1, the Lions will be picking third. Detroit could opt to give Matthew Stafford protection on the offensive line or build its defense up with a pass rusher or defensive back.

The second NFC East team in the top five is the Giants, who finished the year with a record of 4-12. After a decent rookie campaign, Daniel Jones aims to lead this team towards contention. To do so, New York needs help at offensive line, pass rusher, and defensive back.

Rounding out the top five is Miami, which finished 5-11. The Dolphins have five picks in the first two rounds and are sure to use at least one of them on a young quarterback.

Now let’s take a look at the players likely to be taken by one of those teams.

With his fifth touchdown throw of the CFP National Championship Game, Joe Burrow set the record for TD passes in a single season with 60. That capped off a year in which Burrow threw for 5,671 yards, 60 touchdowns, and six interceptions while completing 76.3 percent of his passes.

All of the above is why Burrow is a perfect fit for a Cincinnati team in desperate need of a franchise quarterback. Even more enticing for the Bengals is the fact that Burrow hails from Ohio.

Because of all that, it’s no surprise to see Burrow – this year’s Heisman Trophy winner – as the heavy favorite to be taken No. 1 overall with odds of -1150.

The best player in all of college football is considered by many to be Ohio State pass rusher Chase Young. While helping the Buckeyes to an appearance in the College Football Playoff, Young recorded 46 tackles, 16.5 sacks, and six forced fumbles.

Along the way, Young looked like the most menacing player in the sport while fighting through double teams, stopping the run, and forcing the ball out of the quarterback’s hand well before he’d like to throw.

Although Burrow is the presumptive No. 1 pick, Young holds the second-best odds of being selected first at +550. If not taken first, Young is a no-brainer selection for Washington.

It’s only been a matter of days since Alabama quarterback Tua Tagovailoa announced that he’ll be entering this year’s draft. Despite dealing with a hip injury that could jeopardize his rookie season in the NFL, Tagovailoa is likely to go very high in the draft.

With the Crimson Tide, Tagovailoa was able to throw for 2,840 yards, 33 touchdowns, and three interceptions while completing 71.4 percent of his passes this year. Since taking over for Jalen Hurts and leading Alabama to a national championship, Tagovailoa has remained one of the top quarterbacks in football.

When it comes to the draft, Tagovailoa owns the third-best odds to be selected first at +1200. With the opportunity to sit behind Ryan Fitzpatrick for a year, Tagovailoa is a great fit for a Miami team looking for a long-term solution at QB.