Falcons Allow 53 To Texans; Is It Time For A Coaching Change In Atlanta? 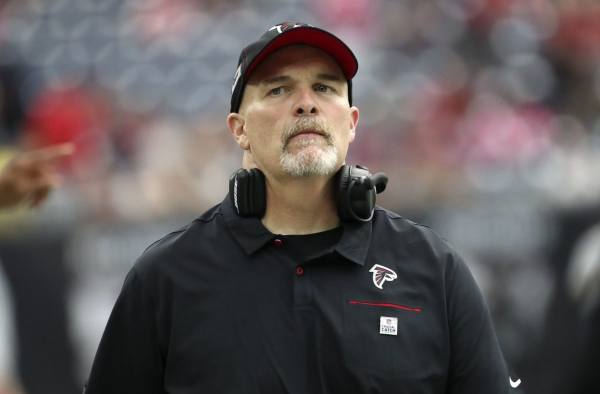 As five weeks of the NFL regular season are coming to a close, we’re finally getting a good look at how most divisional races are shaping up. For the Atlanta Falcons, however, the 2019 season already feels lost.

With a 53-32 defeat at the hands of the Houston Texans on Sunday, the Falcons dropped to 1-4 and now find themselves looking up at all three of the other teams in the NFC South. Although Matt Ryan and the offense were able to score 32 points on 373 yards of offense, it was head coach Dan Quinn’s defense that was significantly outmatched.

In the end, Atlanta allowed the Texans to rack up 592 yards of offense while setting all sorts of personal records.

First, Houston quarterback Deshaun Watson threw for a career-high 426 yards and tied a career best with five passing touchdowns. Three of those touchdowns went to receiver Will Fuller, who achieved a career best of his own with 217 receiving yards.

Despite the score line, Matt Ryan was able to cut the lead to just eight with only 11 1/2 minutes remaining in the game as part of his own 330-yard, three-touchdown day. However, the Texans came right back to extend the lead once again as Watson became the first player in NFL history to throw for at least 400 yards and five TDs with five or fewer incompletions.

For a Falcons team that’s been on the decline since their Super Bowl appearance in 2016, is it time to move on from Quinn at head coach?

Although Falcons owner Arthur Blank responded, “No, we’ve got a lot of football left,” when asked about whether or not a coaching change is now needed, NFL fans know that sort of sentiment can change very quickly.

Now in his fifth season in charge of the Falcons, 2019 is shaping up to be the worst of Quinn’s tenure. Since winning the NFC and jumping out to a 28-3 lead over the Patriots in the team’s eventual Super Bowl loss, Atlanta now appears to be further than ever from making it back to football’s biggest game.

As a rookie head coach in 2015, Quinn led the Falcons to a record of 8-8. 2016 was the year of the Super Bowl run, which the Falcons followed up with a 10-6 season that ended after one postseason win.

The team’s decline resulted in a 7-9 record last season, and now Atlanta owns only a single win through five weeks of play in 2019.

With a quarterback like Ryan and weapons like Julio Jones, Calvin Ridley, and Devonta Freeman, the Falcons expect to be much better than they are. Unless the state of the franchise improves very soon, Quinn’s hot seat will become too much to overcome.

What the Odds Say About Quinn’s Job Security

One of the more cynical bets that can be placed in the sports world is about which NFL head coaches are destined to lose their job before season’s end. Early in the 2019 season, Quinn is a hot candidate in that regard.

After just a single week of play this year, Quinn was the odds-on favorite to be the first NFL head coach to lose his job with +250 odds. Anyone placing a bet on Quinn would have lost that particular gamble after Redskins head coach Jay Gruden, who held +450 odds, was just fired in Washington, but it shows that Quinn certainly isn’t safe.

The NFL has plenty of turnover at the head coach position every year, with a quarter of the teams replacing the man in charge a season ago. Yet only two of those coaches, Hue Jackson in Cleveland and Mike McCarthy in Green Bay, were fired in the middle of the season.

If that number is replicated again this year, Quinn is the most likely candidate at this point.