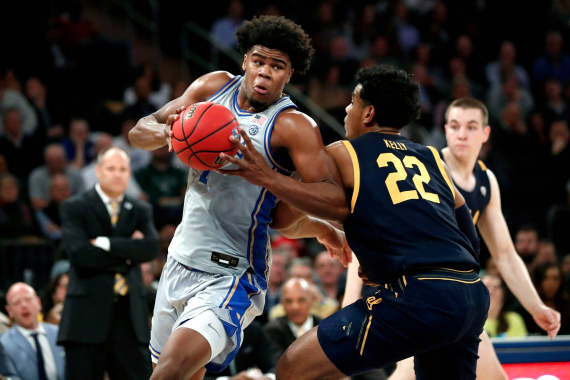 Tuesday night features a matchup of two of the top teams in the nation when the No. 10 Duke Blue Devils (7-1) travel to the Jack Breslin Student Events Center to take on the No. 11 Michigan State Spartans (5-2). Mike Krzyzewski holds a 12-2 record against Tom Izzo, but it is likely Krzyzewski who is looking for revenge after Izzo’s Spartans knocked the Blue Devils out of the NCAA Tournament last year. The rematch, while featuring a mostly new cast of players, is set to take place on Tuesday with tipoff scheduled for 9:30 pm ET.

Duke has had a pretty nice start to the season. The Blue Devils only have one loss on the season, but that was a pretty staggering one as they lost 85-83 to Stephen F. Austin. Trying to regroup, the Blue Devils beat Winthrop 83-70 last Friday and now look to rise to the challenge of the Spartans on Tuesday.

Michigan State’s losses have come in the form of No. 8 Kentucky (69-62) in the season opener and Virginia Tech (71-66) a week ago. Since the Virginia Tech loss, they have beaten Georgia (93-85) and UCLA 975-62). As both teams look to get back towards the top of the rankings, this would be a signature win for either team.

The Spartans come into this one as 6.5-point favorites playing at home. The over/under for total points scored is 146.5.

It certainly hasn’t been a pretty week or so for the Duke Blue Devils, but if you are Krzyzewski, the only thing you care about is if you are playing your best basketball in March. With that being said, he isn’t going to overly worry about a rough stretch, particularly if his team can bounce back to take down the Spartans.

Leading the way for Duke is returning guard Tre Jones. On the season, Jones is averaging 15.1 points, 6.9 assists, and 3.8 rebounds. Despite his strong play, he is actually just the second-leading scorer on the team. Freshman Vernon Carey Jr. actually leads the way in scoring for Duke. The big man is averaging 18.4 points and 9.5 rebounds per game.

MSU Hopes To Make It Two In A Row

After knocking Duke out of the NCAA Tournament last year, Izzo and the Spartans would love nothing more than to beat Duke again, this time on their home floor. To do so, he will turn to guard Cassius Winston to continue his strong play. On the season, Winston is averaging 17.9 points, 5.9 assists and 2.1 rebounds per game.

Aside from Winston, the Spartans are also getting really strong play out of Xavier Tillman. The junior forward is averaging 12.3 points, 2.4 assists and 10 rebounds per game.

Taking Duke And The Points

Especially playing at home, it would not shock me if Michigan State ends up pulling this one off. With that being said, I have a feeling that it is going to be pretty close down to the wire as Krzyzewski’s teams have a habit of playing Michigan State tough. Thus, even with the inconsistency and uncertainty of the young guys on Duke, I still like them when they are getting 6.5 points in the contest. For my money, I am taking Duke +6.5.