Westbrook To Rockets Means Another Shift in Betting Odds 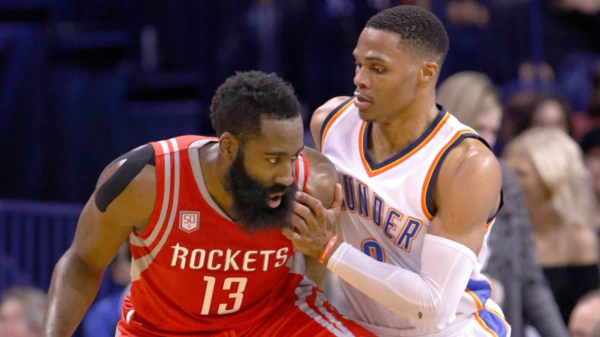 With yet another blockbuster trade going down in the NBA offseason, Russell Westbrook’s arrival on the Houston Rockets changes everything … again

Come the tipoff of the 2019-20 NBA season, we are going to have what will undoubtedly be one of the most dominant and competitive seasons for the Western Conference in years, maybe even ever. There is a legitimate argument to be made that the most top-heavy teams in the conference are going to become a three-team race, with the Houston Rockets, Los Angeles Lakers, and Los Angeles Clippers leading the way.

With the addition of Kawh Leonard, who arrives to a very deep Clippers team, and LeBron James in Los Angeles with Anthony Davis, the West is going to be a must-watch conference in sports. But every week, a new trade continues to rock the boat, causing a ripple effect for oddsmakers, who are constantly shifting the odds from one favorite to another.

In gambling, there is a saying that something is “fade material.” Fade material is just anything that when slated to occur or happen just has to be bet against. And I hate to say it, but you’re going to have to bet against this year’s Rockets team.

This is a team that, while very well put together, is not ready for the big stage. Not even close. While Russell Westbrook and James Harden are both great players, both of them on the same team is going to be a nightmare for fans (and anyone who bets on them) in crunch moments.

Because both of these players are tremendously ball-dominant, and Westbrook especially is not going to be a guy that coughs the ball up easily. While the Russell Westbrook and Paul George experiment came to an abrupt end, so too did the Chris Paul and James Harden experiment. But Harden and Westbrook have consistently proven that both of them are heavily flawed players that, while good in their own right, are just not good enough to get over the hump.

Presently, the Rockets are listed at +800, just behind the Milwaukee Bucks and the team with the fourth highest odds in the NBA to win the championship. This is critical to keep in mind because going down the road, we’re going to see both of these teams becoming far more competitive as the season gets tighter.

There is no doubt that the Rockets are going to be in the playoffs, but the question going forward is the following: Are they deep enough to survive the rigors of a full season? This presently remains to be seen, and until something changes, it’s going to be a very curious challenge if this team can stay healthy and keep both of these highly ball-dominant players happy. That said, it would mean that both would be reuniting for the first time in seven seasons, when both players were separated following a trade that would send James Harden to the Rockets, establishing him as the team’s de facto leader and superstar.

There is no doubt that this is a talented squad, but to win in this league, depth and health reign supreme. That said, immediately wagering on the Rockets is probably not a good idea given that the price on them is going to be heavily inflated. But at +800, not a bad shot to take on a team with one of the more talented duos in the league.