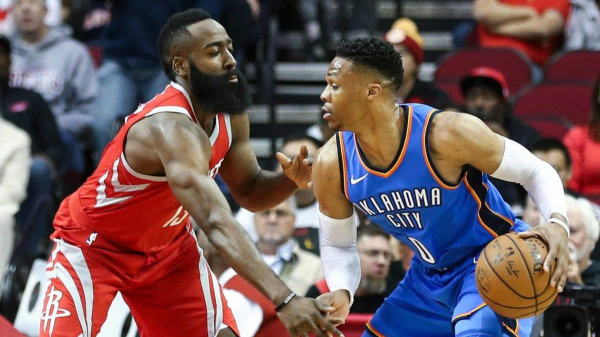 With the news that Russell Westbrook is coming to Houston, the proverbial rocket that is Houston’s championship aspirations shot to another level; perhaps a level never thought possible. With the addition of Westbrook, this could be the best team that Houston has put together in the James Harden era, and it is coincidentally the same time that the Western Conference is as wide open as it’s ever been. This sudden addition not only makes the Rockets instant title favorites, but there are several aspects of the trade that finally make Houston a far more dangerous squad, and certainly, a much more promising option when it comes to making a wager.

One of the most important aspects of the trade is the fact that it adds another dynamic scorer. One of the biggest issues with Houston in the past has been its over-reliance on James Harden. Harden, while a phenomenal player, is by no means the type of subject that can carry this Houston roster to anything beyond Western Conference appearance by his lonesome.

However, the addition of another dynamic scorer is what makes him the ideal person to have on the squad. This is precisely why he is a phenomenal addition to the roster, and why other teams will have to fear this one-two punch of Harden and Westbrook playing on the same roster.

Value or No Value?

At present, besides the fact that Russ obviously makes them title favorites, it’s important to understand the concept of value, something that we bring up frequently. How do you know if you’re getting value? The short answer is, if you have to ask, you’re probably not getting any, and frankly, with all of these big favorites that are popping up, mostly in the Western Conference, it remains to be seen who really is deserving of that “favored” status.

Thus far, it seems that the most integral aspect of finding out who can handle what comes down to the fact that there has to be someone that is overall aware of the longstanding issues that often come into play.

These are issues that, while relevant, are unsustainable in the long term, ensuring that if you’re betting against +EV (positive expected value), then you’re going to be making bad investments each and every time. That’s why it’s essential that if you are wagering on a futures bet (like the Rockets), you need to determine whether you’re getting a good deal or a bad deal.

Right now, at +700, there is an implied 13-percent chance that the Rockets will win the championship. Ideally, despite the addition of Westbrook, you’d probably want to get around +1100.

The increased number on the price means that while you’re still getting about the same chance, the payoff is a lot better, ensuring that if you are going to take the risk, you’re going to be compensated much more handsomely given the very slim odds that you’re going to be successful. Ultimately, that is going to be the consequences that are going to be shown going forward, and as a result, it’s going to overly complicate things as they proceed, making it tremendously challenging.

Patience is a Virtue

While these additions are definitely promising on paper, there is absolutely no value at this given time, meaning that it’s best that all interested prospective Rockets bettors standby before making a considerable investment. Until we know for sure how this team plays out, making an uneducated wager is not a smart idea for the foreseeable future.

That said, don’t be surprised if you see the Rockets finally breaking through to the NBA Finals for the first time since Hakeem the Dream was in the paint.