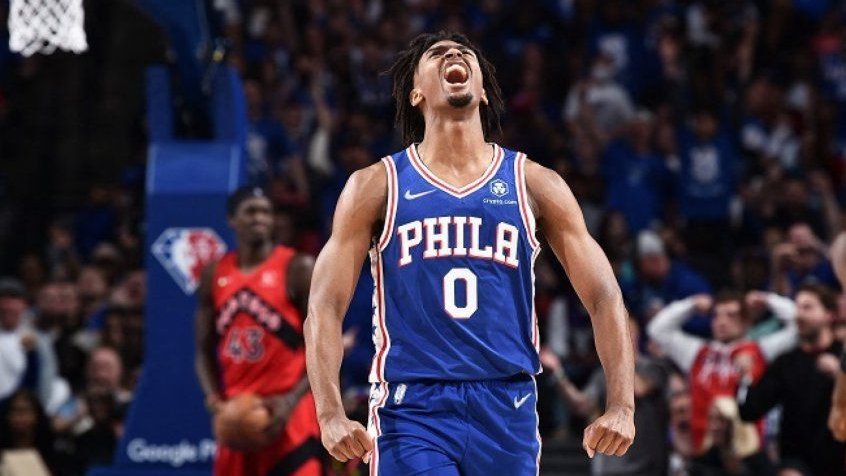 After a dominant win over the Toronto Raptors in Game 1, the Philadelphia 76ers had the perfect start to this year’s NBA playoffs. And with the Raptors facing some serious injury concerns ahead of Game 2, the Sixers will be eyeing another standout showing and a 2-0 lead to take with them to Toronto.

In Game 1, a 38-point explosion by Tyrese Maxey led the Sixers to a 131-111 win at the Wells Fargo Center. Philadelphia scored 69 points in the first half and hit the century mark in the third quarter on the way to a resounding win.

But as good as the Sixers’ Game 1 performance was, it could have been even better, which is a scary thought for Game 2 and beyond. Will the Raptors be able to keep up, especially if they are shorthanded?

Can the Raptors Challenge the Sixers Without Missing Trio?

As comfortable as Game 1 proved to be for the Sixers, the Raptors have a tough task in Game 2 no matter what.

But that task could be a lot tougher with the potential that they could be down three players for tonight’s matchup in Scottie Barnes (left ankle sprain), Gary Trent Jr. (illness), and Thaddeus Young (hyperextended left thumb). All three played in Game 1 but look unlikely to play tonight.

All three players are listed as doubtful, which is not a good sign. The biggest blow would be Barnes, who was two assists shy of a triple-double in Saturday’s loss. He was one of the bright spots in his 32 minutes of action, scoring 15 points (4-6 FG, 7-9 FT), grabbing ten rebounds, and dishing out eight assists.

Trent didn’t have a great game in Game 1, making only 2 of 11 from the field (2 of 7 from three) and scoring just nine points in 26 minutes. But he is the team’s third-leading scorer behind Pascal Siakam and Fred VanVleet, and he is one of their top perimeter threats. In the regular season, he ranked in the top 20 in the NBA in made threes and attempted threes, and he shot 38.3 percent from outside.

Young, who played his first seven NBA seasons with the Sixers, has been a key reserve since the Raptors traded for him in February. In 26 regular season games with Toronto, he averaged 6.3 PPG and 4.4 RPG in 18 minutes per game.

Could the Sixers Be Even Sharper in Game 2?

That the Sixers scored 131 points in Game 1 against one of the better defensive teams in the NBA is extremely impressive.

But when you consider that the Sixers scored 131 points with Joel Embiid (5 of 15) and James Harden (6 of 17) going a combined 11 of 32 from the field makes it all the more impressive.

Embiid still ended up with 19 points and 15 rebounds, and Harden made hit four threes and finished with 22 points, 14 assists, and five rebounds, so they were still prominent parts of the win.

Even with those two shooting a combined 34.4 percent and Danny Green missing all five of his three-point attempts a little over a week after going 6 for 7 from three against his former team, the Sixers still shot 51.2 percent from the field (43 of 84) and 50 percent from three (16 of 32).

The Sixers currently come in fourth in the East and seventh overall in the latest 2022 NBA championship odds (+1400 at Caesars Sportsbook and +1600 at both FanDuel Sportsbook and BetRivers), but more performances like Saturday’s will position them well to be playing into June.

Obviously, Maxey and Harris not going to combine for 64 points every time out, and you aren’t going to get 61.5 percent shooting from the supporting cast every time out either.

But when you have third and fourth options who can go off like that in addition to Embiid and Harden, you have the potential to go very, very far in the NBA playoffs.

The Raptors would be up against it even if they were at full strength, but if they are missing Barnes, Trent, and Young, they will need one of their best performances of the season to pull out a win.

Embiid’s form over the past few months makes for pretty ominous reading for the Raptors, based on how he has responded more often than not after a poor shooting performance.

Saturday’s game marked the eighth time (in 45 games) in the calendar year that Embiid, who was announced as a 2022 NBA MVP finalist on Sunday, shot under 40 percent from the field.

Here are his numbers in the next game in the first seven instances:

Most importantly, the Sixers won six of those seven games. The only loss was a 114-110 loss to the Denver Nuggets and Nikola Jokic, who is likely to beat out Embiid for the MVP for the second straight season.

The 2022 French Open is underway at Stade Roland Garros in Paris, France, and we are already almost through the first week of play. Tomorrow, the remaining third-round matches will take place, after which the men’s and women’s singles draws will be down to their final 16 contenders. In both men’s and women’s singles, there END_OF_DOCUMENT_TOKEN_TO_BE_REPLACED