Thunder Fail to Move Paul; Any Chance He Succeeds in OKC? 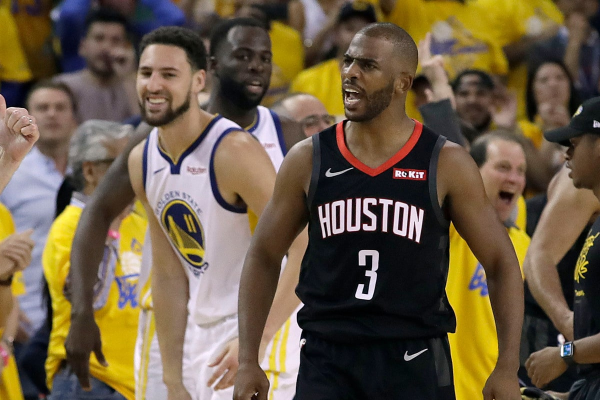 In what might be one of the most awkward arrivals, Chris Paul is now on the Thunder after the Westbrook trade. How does this relationship go?

If there is anyone in the NBA that is unhappy about where they’re at, it’s probably Chris Paul. It’s important to understand that because this is a player that bounced around from the Clippers to the Rockets in recent years, with full hopes of possibly playing for an NBA championship. But now, he’s on a team that is undoubtedly going to be out of the playoff picture and is in complete rebuilding mode.

The Thunder fully hope to have moved Paul before the season tips off, but instead, so far, he’s stuck with them. So what is Paul actually going to offer the Thunder, and frankly, what the heck can Thunder even offer Paul?

That sounds very patronizing, but frankly, Paul has been a consummate professional throughout his career, and because he has a job here, it’s very obvious that he is going to bite his tongue and play on. Remember, as with anything else, it’s a long offseason, and it is possible that the Thunder could try to move Paul before the season tips, and even so, we may very well see him moved before the trade deadline in February of 2020. Paul is still a talented player, and while he may be a little past his prime, he can still offer a team some good minutes.

The only problem with Paul is that his style of play is a bit antiquated in the modern NBA. Against players like Steph Curry, Damian Lillard, and Russell Westbrook, who really play more like hybrid 2-guards rather than pure points like Paul, he is finding himself to be the last of a dying breed.

The likes of John Stockton, Chris Paul, and Steve Nash are simply old news in the modern NBA, as teams move forward towards more two-way players that are positionless. Players that are unable to actually tally up massive scoring and can actually take on players like the Lillards and Westbrooks of the world, who are way too dynamic and athletic to stop.

What do you define as success? That’s the question Chris Paul has to ask himself. His pursuit for a ring seems even more elusive, and while he may very well play somewhere to get one, it’s going to seem unlikely that such a thing is possible in Oklahoma City. Barring the greatest upset in NBA history (ok, not quite that big, but still) the Thunder have no reasonable probability of winning it all in a loaded Western Conference.

Not only is their probability of winning it all very slim to near-impossible, it’s going to be very hard for this team to even compete for a playoff spot. This is not to say that Thunder are a bottom-feeder team, but the loss of Westbrook was essentially their concession of trying to compete for anything, and the same is true when they opted to move Paul George.

For Paul, he has to be a big boy (which he is) and figure out what success means to him. If he can teach and mentor the younger players, be a strong leader in the locker room, and not be a toxic presence in the locker room, then it’s very likely he will prove that he is still worthy of a starting position in the NBA.

Paul certainly finds himself in a very awkward position, but there’s no doubt, if he’s moved around this much, the Thunder is not going to be the last NBA team that he plays for.