Team Effort Lifts the Raptors to a 2-1 Series Lead on the Warriors. 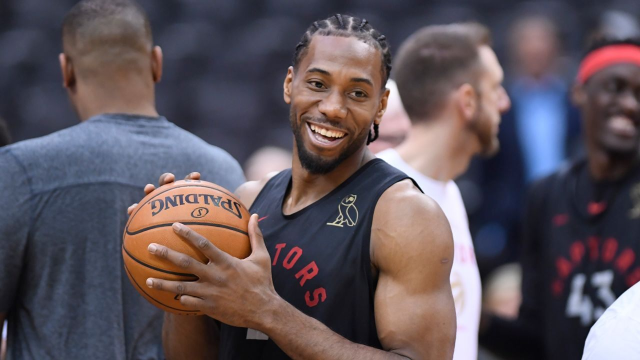 This has been a whirlwind season in the NBA, and it resulted in the Toronto Raptors making it to their first-ever NBA Finals. And now that they are here, they’re looking to make some serious noise. Up 2-1 now, they are halfway to claiming a title for the first time, and there are just so many different reasons.

For starters, Nick Nurse has been doing an incredible job with his rotations, especially considering only seven players have his full trust. And each one of them did what they needed to last night. Serge Ibaka only had six points and five boards in his 21:50 of action last night, but he blocked SIX shots, rightfully showing Mountain Dew that he should be in their “Welcome to the Block Party” ad over Joel Embiid. Fred Van Vleet shot four of eight (three for six from three) in 33 minutes, but he added three more steals, and he defended Steph Curry with intensity once again.

Danny Green, who many of us seemed to have forgotten about, jolted to life with 18 points on six threes made and even sent a shot from Quinn Cook flying off the backboard. Kyle Lowry finally became a shot maker, ending with 23 points on 8-16 shooting, including five threes, also dishing out nine assists. Pascal Siakam got off to a hot start and ended with 18-9-6, and a game-high +22 net rating. He slammed down a dunk late in the fourth quarter to help put the game out of reach. And then there’s Marc Gasol, who finished with 17-7-4, and his ability to be mobile on defense played a huge part in their success. They are now 6-1 this postseason when he’s in double-digits.

Lastly, we have Kawhi Leonard, who continues to play despite being tremendously banged-up. He had 30 points (9-17 FG, 10-11 FT), seven boards, and six more assists. He threw down dunks over Jordan Bell, and the ball extremely well. His effort helped them overcome a -8-offensive rebounding margin. Each and every Raptors player was integral to their victory yesterday, as the road team has now won two of three games in the NBA Finals. This is also the first time in three years we have seen Golden State lose multiple games in the Finals.

For Golden State, we knew it would be tough for them to win from the time the game began. DeMarcus Cousins is far from 100%, Kevon Looney was unavailable, so his ability to set screens and rebound couldn’t be out there. Kevin Durant missed his eighth game in a row, and Klay Thompson’s hamstring caused him to miss his first playoff game after he had appeared in the first 120 possible. This was all about Stephen Curry and whether he could have a miraculous performance to carry them to a win.

He launched 31 shots, making 14 of them, and went 13-14 at the FT line. He played 43:15, only sitting garbage time minutes and the first three of the second quarter. He did so many impressive things, but he needed a little help, that the Raptors knew was not coming through that door. There is plenty of time in this series, and with Klay now coming back, they’ll have a good chance to even things up tomorrow.

After four years in a row of Cavs-Warriors, it’s been refreshing as a fan to see a different team get to fight the juggernaut. Toronto is showing that their being here is no fluke. Canadian Basketball is as good now as it has ever been, and friendly reminder: THEY ARE TWO WINS AWAY FROM AN NBA CHAMPIONSHIP.