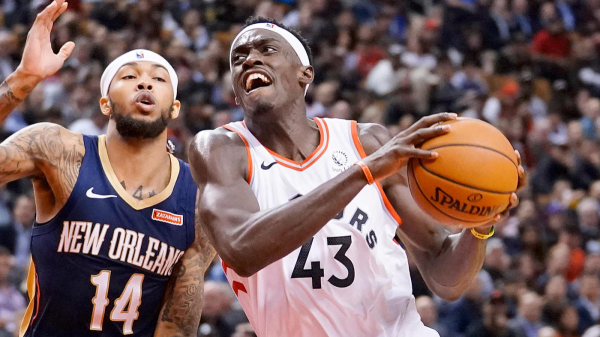 Since reigning NBA Finals MVP Kawhi Leonard left the city of Toronto to team up with Paul George in Los Angeles, the world seems to have forgotten about the Raptors. On the league’s opening night, Pascal Siakam was sure to remind the league that the Raptors are still the defending champs by leading them to a 130-122 overtime win over the New Orleans Pelicans.

While most NBA experts spend all their time talking about LeBron James and Anthony Davis with the Lakers, Leonard and George with the Clippers, or even James Harden and Russell Westbrook with the Rockets, Siakam and Fred VanVleet showed the world they can’t be overlooked in the Eastern Conference.

In 44 minutes, VanVleet put up 34 points, seven assists, five rebounds, and two steals. When the game went to overtime, and the Raptors found themselves up by just two, VanVleet delivered a vital three-pointer to put the game out of reach.

Shooting 5 of 7 from beyond the arc, VanVleet proved that he’s an integral part of this team.

Meanwhile, Siakam was the best player on the floor all night. In 38 minutes, he scored 34 points of his own and added a whopping 18 rebounds and five assists. The power forward’s double-double showcased his all-around game and helped Toronto defend its home floor.

With a season-opening win, the Raptors showed us they’re not just going to lay down after Leonard’s departure. But do they have a chance to win back-to-back Eastern Conference championships?

Toronto may not have a well-known superstar or a deep bench full of veteran role players, but they do have a strong roster that extends beyond the starting five.

Joining Siakam and VanVleet, Kyle Lowry made his presence felt in the opener with 22 points, six assists, and five rebounds. And from the bench, Serge Ibaka added 13 points and five rebounds in addition to his defensive presence.

So, who do the defending champs have to worry about in the Eastern Conference?

Let’s start with the Bucks, who likely have the best player in the entire conference – Giannis Antetokounmpo. The Greek Freak is joined by the Lopez brothers, Robin and Brook, as well as George Hill.

Although Milwaukee lost Malcolm Brogdon in the offseason, they were able to find a replacement in the form of Wesley Matthews.

Next up we have the 76ers, who looked primed to make a deep postseason run despite losing Jimmy Butler in the offseason.

The Philadelphia roster looks scary after acquiring Josh Richardson and Al Horford to add to the core of Joel Embiid, Ben Simmons, and Tobias Harris.

Don’t forget about the Celtics, who will be thin at big man since the loss of Horford and Aron Baynes. However, Boston was able to replace the departing Kyrie Irving with the arriving Kemba Walker.

With Enes Kanter roaming the boards, the Celtics will need the best versions of Jayson Tatum, Jaylen Brown, and Gordon Hayward.

Finally, let’s take a look at the Pacers. Coming off a 48-34 year as a surprisingly good team, Indiana will contend in the Eastern Conference if they get a healthy Victor Oladipo and a strong frontcourt pairing between Myles Turner and Domantas Sabonis.

Favorites In The East

We’ve laid out the important parts of the potential Eastern Conference contenders, but who has the best chance of representing the conference in the NBA Finals?

With Giannis on the team, it’s no surprise to see that the Bucks are currently the favorites in the Eastern Conference with odds of +160. Yet Milwaukee isn’t a heavy favorite, as the 76ers (+190) are hot on its tail.

Boston is on an island, holding the third-best odds of winning the conference at +710, which shows they have a decent shot if their most talented players are at their best.

And finally, we’re at the small grouping of Toronto (+1200) and Indiana (+1300) as the longshots who have the potential for postseason glory if everything goes perfectly according to plan.