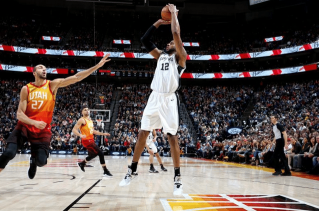 Friday will feature a battle of the West vs. East when the San Antonio Spurs (33-26) travel to Scotiabank Arena to take on the Toronto Raptors (43-16).

For the Spurs, who currently sit in 7th in a loaded Western Conference, they come into this one having won just one of their last five games, a 108-107 win over the Memphis Grizzlies on Tuesday. For the Raptors, who currently sit in second in the Eastern Conference, they have been rolling. They have won six in a row since losing to the Milwaukee Bucks back at the end of January. Their most recent victory was a 129-120 win over the Washington Wizards. These two will match up on Friday with tipoff scheduled for 7:00 pm ET.

In this contest, the Toronto Raptors come in as 7.5-point favorites playing at home. The over/under for this game is set at 228 points.

On the offensive side, both of these teams have been amongst the best in the NBA. For the Toronto Raptors, they currently rank 6th in the NBA in adjusted offensive rating, which estimates points scored per 100 possessions while taking the opponent’s defense into account, with 113.79 points. For the San Antonio Spurs, they come in one spot better, ranking 5th at 113.93 points.

Defensively, it is the Toronto Raptors who are clearly the better team. In adjusted defensive rating, which estimates points given up based on 100 possessions while taking into account the opponent’s offense, they rank 7th in the NBA at 108.47 points. The Spurs, on the other hand, have been one of the weaker teams when it comes to adjusted defensive rating, ranking 21st overall at 112.40 points.

Spurs Looking To Improve On The Road

The San Antonio Spurs currently sit in 7th in the Western Conference, but they have a lot of competition if they want to hold onto that spot. There are four teams within five games of them, which means that they are really going to have to keep going strong. One area where they can definitely improve is on the road, where they are just 11-19 this season.

Leading the way for coach Popovich’s team this season has been the duo of DeMar DeRozan and LaMarcus Aldridge. For DeRozan, he has been averaging 21.4 points per game on 46.3% shooting. He is also averaging 6.1 rebounds and 6.1 assists per game, while also adding a steal per game. DeRozan actually leads the league in two-point baskets (925) and ranks 20th in the league in points per game. For Aldridge, he is averaging 21 points on 50.9% shooting while also adding 9 rebounds and 2.6 assists per game.

At only 1.5 games behind the Milwaukee Bucks, the Raptors are trying to fight their way into the Eastern Conference lead. At 24-5, they are relatively dominant at home and will look to continue that success against the Spurs.

While it was heavily criticized at the time, the Kawhi Leonard – DeMar DeRozan trade has been working out really well for the Raptors this season. He is currently averaging 27 points on 49.2% shooting. In fact, his 27 points per game ranks 8th in the league in points per game. He is also chipping in 7.7 rebounds, 3.3 assists and 1.9 steals per game. Another nice addition for the Raptors this season has been the trade deadline acquisition of Marc Gasol. This season, between two teams, he has averaged 15.4 points, 8.5 rebounds, and 4.5 assists.

Aside from these two, the other major contributors for the Raptors this season have been Serge Ibaka (16 points, 8 rebounds), Kyle Lowry (14.3 points, 4.5 rebounds, 9.2 assists), Pascal Siakam (16.1 points, 7 rebounds) and Fred VanVleet (10.5 points, 4.6 assists), although VanVleet has been sidelined with a thumb injury.

Raptors Win, But Can They Cover?

In a straight-up bet, this one seems like a no brainer for me. I like the Raptors‘ depth and scoring ability much better than that of the Spurs and the fact that they are playing at home is a huge bonus. My concern is the 7.5 points, which seems like a lofty spread for two teams that are both pretty good statistically on the offensive side. I know that the Raptors’ defense is far superior to that of the Spurs, but I just can’t comfortably bet against San Antonio when they are being spotted 7.5 points, despite their woes on the road. For my money, I am taking the Spurs +7.5.