Suns vs Clippers Game 6 Betting Preview: What Do the Clippers Have Left in the Tank After Forcing Game 6? 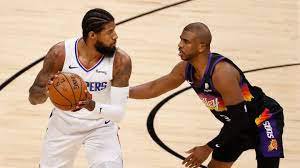 Monday night, the Los Angeles Clippers entered Game 5 of the Western Conference finals needing to win in Phoenix to keep their NBA Finals hopes alive. With how the Suns played in taking a 3-1 lead, the Clippers faced long odds literally and figuratively.

Well, Paul George made sure that the Suns’ wait for an NBA Finals berth must wait until at least tonight. We are getting at least one more game, and it will be a home game for the Clippers. If you are going to kill PG when the Clippers lose, then you have to praise him when they win. And he definitely deserves it after the performance he put on in the third quarter of Game 5, shooting and willing the Clippers to a win on the road.

The Clippers are not out of the woods yet, but Phoenix has to have some doubt creeping into their heads. The first quarter of tonight’s Game 6 will show us a lot. Whoever wins that just might win the series.

Suns Look to Earn NBA Finals Berth on the Road

For a home team that could have advanced to the NBA Finals, the Suns played very tentatively the other night. They were down 10 points by the end of the first quarter and never seemed to play with the urgency you would expect.

Guard Devin Booker scored a very quiet 31 points. He still seems a little uncomfortable out there and definitely lost his top scorer matchup with George. The question is what will it take to light a fire under him.

Chris Paul has never made his game about the three-point shot but he was 0 for 6 in the loss. Some of those might have been forces late in the game as they were playing catchup, but they need him to be at least be a threat from the perimeter. It makes him able to do all they need him to inside the arc, creating for others.

Center Deandre Ayton had his worst game of the series, scoring just 10 points. The Clippers played him differently with Ivica Zubac out, and he was pretty much a nonfactor. He needs help and can’t do it all on his own.

Phoenix still has two games to win one. They are not playing their best ball though, which is why I am surprised they are still a small NBA betting favorite as they try and close the series.

Clippers Can’t Let Up With the Series Heading Home

You have to start with Paul George, who was magnificent in the Game 5 win. Not only did he lead with 41 points, including 20 in the third quarter, but he was methodical, never really forcing it. He missed only 5 of 20 shots and killed Phoenix inside and beyond the arc. We have always known what George can do, now we just have to see it for the rest of the series if the Clippers are going to advance to the NBA Finals.

It was not just George on Monday though. Guard Reggie Jackson was fearless in scoring 23 points, and Patrick Beverley was once again an elite agitator.

With Zubac out, the Clippers mixed it up and went small to start the game with Terance Mann and Beverley in the starting lineup with George, Jackson, and Marcus Morris. They got the win so I guess it worked, but you have to wonder if they might start DeMarcus Cousins after the impact he had in Game 5. Coming off of the bench, Cousins recorded 15 points in 11 minutes. Role players often play better at home, so Ty Lue has options. At least he is being creative, and he has the ultimate excuse with Kawhi Leonard being unavailable.

The Clippers still need another win to force a Game 7. Just like the previous home games, they are slight underdogs at the Staples Center.

Tonight, the most pivotal game of the 2022 NBA Eastern Conference finals takes place in Boston, with the Miami Heat taking a 2-1 series lead into their matchup with the Celtics. In Game 3 on Saturday, the Heat took control early, outscoring the Celtics 39-18 in the first quarter and leading by as many as END_OF_DOCUMENT_TOKEN_TO_BE_REPLACED