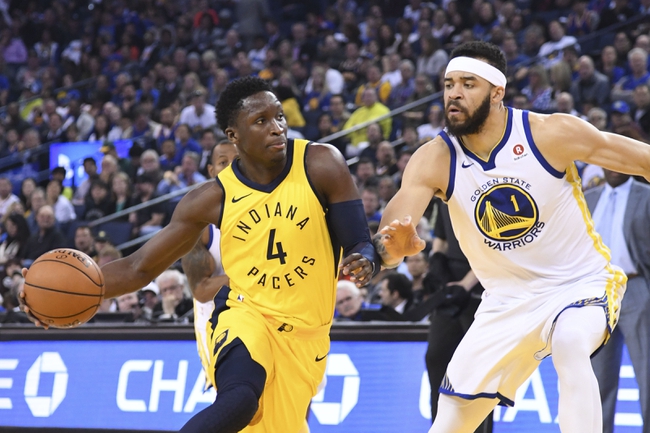 The 6-4 Golden State Warriors are set to take on the 6-4 Indiana Pacers on Tuesday in what should be an interesting meeting of 2 powerhouse teams. In fact, between the Pacers being ranked 3rd in the Eastern Conference and the Warriors ranked 8th in the Western Conference, this is going to be a crucial game for both teams. It should also be fun for gamblers wanting to get in on all the action.

Who do you go with though? Both teams have put together decent winning streaks so far this season, but what will happen when they finally clash? Can Steph Curry, Andrew Wiggins, and James Wiseman, keep the hard-charging Pacers at bay? Or will Malcom Brogdon, Domantas Sabonis, and Victor Oladipo be able to power past the former NBA Champions.

The Golden State Warriors are 4-1 in their last 5 games and coming off a 106-105 victory over the 2-7 Toronto Raptors. Their best game during that period was a 115-195 over the 3rd ranked Clippers, who had bested them in a game only a few days ago. Beyond that, they also hold wins over the Trailblazers and the Sacramento Kings, making them one of the most versatile teams in the league.

As for the Pacers, they are 2-3 in the last 5 games and are coming off a frustrating loss to the Sacramento Kings on Monday Night. While the Pacers did keep the game close the entire time, they fell victim to a nice run by the Kings in the decisive moments of the 4th quarter. Their only thing of note was a victory over the Rockets, which at least keeps them competitive in the division.

The Golden State Warriors and the Indiana Pacers have a lot in common, but their biggest similarity seems to be their success at the 3-point line. Although accuracy usually various by game, both teams have scored above 20% from the 3-point line in 4 of their last 5 games. This means that whoever wins the game at the arc, could be the team that wins the whole thing.

On the other hand, basketball is very much a game of depth, and that is why it could end up favoring the Pacers. Of course, some will be skeptical after their loss to the Kings, but they are still a 6-4 team. They also have seven players who average 10 points or more a game, giving them the needed depth when it comes to their bench.

Another thing that the Pacers have going for them is the rebounding efforts of Domantas Sabonis, who averages 12.6 rebounds per game. If nothing else, that’s a lot of second-chance points, and really comes in handy when the Pacers need to get a run going. That’s going to end up being crucial in Tuesday night’s game and could hand Indiana a key win early in the season.

The oddsmakers betting against the Indiana Pacers is both predictable and a chance for gamblers to take advantage. Think about it! The Pacers have the depth on their bench, they have Sabonis bringing down key rebounds, and a great ability to move the ball around. They are going to win this game, even if they don’t win the game from beyond the arc. The Pacers simply have too much talent not to.

Then again, maybe the opinion of the oddsmakers is a little easier to see due to the fact that the Pacers are playing back to back games, but they can still remain competitive. Whether they win or not remains to be seen and, but the Pacers have the depth in their bench that could allow them to win while still resting several of their top guys.