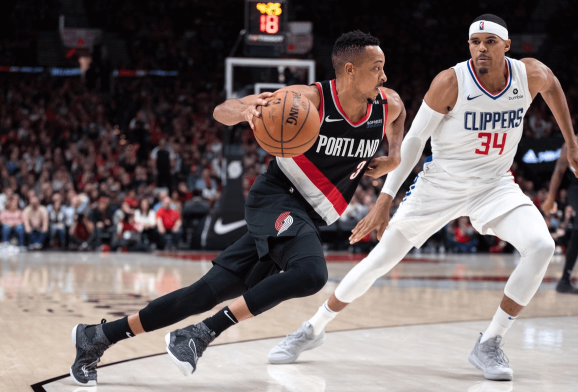 The Oklahoma City Thunder are taking on the Portland Trail Blazers in Portland tonight on TNT. These 2 teams have squared off three times this year, and the Thunder are 3-0 in the series so far. All three games have been within 9 points and been between 220 and 237 points, so we can expect a close and high scoring game in this one. The Trail Blazers are favored by -3.5, which is a little surprising due to the season series at hand.

On the Way to Getting Healthy

Both teams are getting healthy, with the Blazers seeing more production out of Moe Harkless and the bench unit with guys like Rodney Hood and Enes Kanter being added and Evan Turner getting healthier.

The Thunder were without Paul George for a few games, which really hurt them due to their lack of scorers. It suddenly asks Dennis Schroder, Jerami Grant, Steven Adams, and Westbrook to step up for their 30-point scorer, which they struggled to do. George returned last game, but he struggled from the field, making only 8 of his 25 shots and 4 of his 14 3’s. George’s efficiency over the last few months has been incredible, and if that is gone, the Thunder will continue to struggle. The reason this one bad shooting performance has me somewhat concerned is due to the injury. George was complaining of shoulder soreness/pain. That is something that could notably affect the jumper moving forward.

The Oklahoma City Thunder have lost 6 of their last 8, where their only 2 wins were a double-overtime win over the Jazz and a home win over Memphis by just 4 points. A few of these games could be written off due to George’s injury, but I think that they are really reliant on PG to score at a high level to continue to be a threat. We saw the Thunder start the year slowly and then go on a tear from December through February. During this time, Paul George started to pitch a case for MVP. Now, on the one hand, this is great. A talented team gets a star player to transform into an MVP-caliber player. The issue is that this team struggled when George wasn’t playing out of his mind. If this injury is still bothering him or he has simply cooled off, I am really worried that we may see them struggle a bit down the stretch. Westbrook has had a horrible shooting year, masked by George’s incredible efficiency numbers. If George struggles, we will see a lot of blame put on Westbrook at the end of the year.

The Trail Blazers have won 6 of their last 8, but also have lost 2 of their last 3. The recent loss to Memphis was pretty rough and not a great look for this team, but a 2 point loss in Toronto is just fine and shows that this team is still very much competitive with top teams. This matchup has been a struggle for the Blazers this year because I don’t think they have a great advantage on the offensive end. We see Nurkic and Adams do well to neutralize each other. Westbrook’s offensive struggles have led to him play harder defense, hurting Dame’s production. C.J. McCollum is not really producing as much as I would like on a nightly basis, and Terrance Ferguson is a good athlete that can be annoying defensively. No one else on the Blazers really has the firepower to win a game for them. All these things are concerns, but they’re not impossible to overcome. Any three of those guys can be great in slightly below-average matchups, and they have this season. Lillard and C.J. have scored 30 points on this team in the same game, but Paul George has been phenomenal in this spot all season. They need to stop PG at all costs, and I think they will have success after that.

This game is interesting to pick due to the strange line. I will take the Blazers -3.5 in this spot for a few reasons. If PG isn’t 100%, this game is a wrap. He has scored 37, 37, and 47 in these three matchups this year and they have still been great games. Also, it is hard to beat a good team 4 times in a row, so the Blazers really need this one to show they can compete vs. the top of the conference.