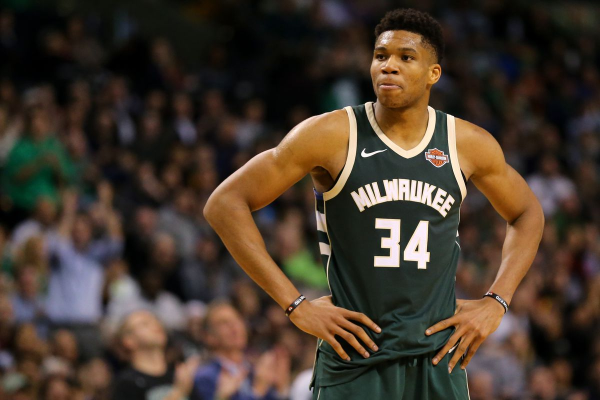 With Lebron out of the Eastern Conference, it is now a wide-open competition for who is going to take over and dominate a weak Eastern Conference in the NBA. While many of the eyes immediately turn to the Boston Celtics or the Toronto Raptors, two teams who hope to vie for the top spot are the Philadelphia 76ers and the Milwaukee Bucks. Led by stars Joel Embiid and Giannis Antetokounmpo, the two teams consist of rising stars in the NBA and are poised for big things this year. The two will have the opportunity to square off against one another on Wednesday when the 76ers (2-2) travel to Fiserv Forum to take on the Bucks (3-0). Tipoff is scheduled for 9:30 pm ET.

The Milwaukee Bucks come in as 4-point favorites in this one. The over/under for total points scored is set at 215.

For the Philadelphia 76ers, they will be playing the second game of a back-to-back Wednesday night. On Tuesday, they lost a tough one to the New York Knicks, 133-132 in overtime. In that game, Joel Embiid led the way for the 76ers with 33 points and 11 rebounds. Through the first four games, he is averaging 29.5 points, on 51.9% shooting, 10.8 rebounds, and 3.8 assists per game.

In addition to Embiid, the 76ers have a plethora of scoring options as currently all five starters average double digit scoring. Currently, the team relies on Ben Simmons (12 points, 9.3 rebounds, 7.7 assists per game), Dario Saric (11.5 points, 8.3 rebounds), JJ Redick (21.8 points, including 43.6% from behind the three), and Robert Covington (14 points, 5.8 rebounds) to lead the way.

Still, this team is largely built around both Joel Embiid and Ben Simmons. For Simmons, as a 6’10” point guard, he creates matchup problems all day long, even if he is adverse from shooting the three. In their four games thus far, Embiid has been the leading scorer in every single one, either Simmons or Embiid have been the leader in rebounds and Simmons has led the team in assists 2 of the 4 nights. Needless to say, while the supporting cast certainly has roles to play, this team will go as far as JoelEmbiid and BenSimmons take them.

While the 76ers have Embiid and Simmons, the Milwaukee Bucks fearsome duo in GiannisAntetokounmpo and KhrisMiddleton. Through their first three games, Antetokounmpo is averaging 27.3 points, 16 rebounds, and 5.7 assists per game while shooting 46.6% from the field.

Middleton is currently sitting at 24 points per game on 58.1% shooting, with 6.7 rebounds and 3.3 assists. Together, they form quite the matchup nightmare, especially for teams in the Eastern Conference.

The biggest question for the Bucks on Wednesday will have to be answered from Lopez, as it will remain to be seen whether he can slow down Embiid both in the paint and on the boards. If he can do so, the Bucks will probably be in a pretty good spot for this one.

I think this is going to be a fantastic match up, particularly later in the season when the rust has been shaken off. For Wednesday night, though, I am a fan of the Bucks. They have been playing some great basketball to start the season, scoring 113 points or more in each of their first three games.

They have also allowed over 100 in each of those games, but with the 76ers coming off of a back-to-back, especially one that included a Tuesday night heartbreaker that extended into overtime, I see the Bucks being fresh and ready to go from the tip off while the 76ers may just want to get out of town. If Embiid and Simmons still have their legs, they might keep it close for much of it, but ultimately I am taking the Bucks even giving up 4 points.

Tonight’s NBA betting schedule is lacking in overly compelling matchups, but tonight’s action will also be taking place with a few notable names missing. Booker, Morant, and Lillard Sidelined Tonight and Beyond Booker Out Versus Pistons Due to Hamstring Injury The Phoenix Suns lost Devin Booker (hamstring) on Tuesday against Golden State but closed out END_OF_DOCUMENT_TOKEN_TO_BE_REPLACED