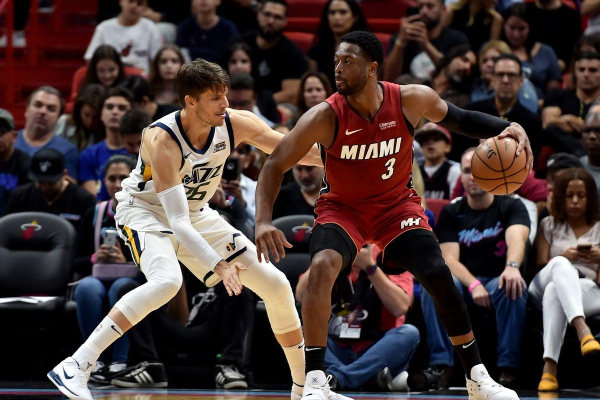 The suddenly red-hot Houston Rockets will hit the road for a game against the Miami Heat on Thursday night. The Heat are one of the top defensive teams in the NBA, but will try to deal with a dynamite Rockets offense in this game. The Rockets are coming off of a record-setting game on Wednesday night that saw them hit 26 three-pointers to set a new single-game record.

Miami is returning home after a six-game West coast road trip that saw them go 4-2. The Heat have been very inconsistent this season, and bring a 13-16 record into this contest. Miami sits in third place in the very winnable Southeast Division, just 1.5 games behind the first place Charlotte Hornets. The Rockets have won five straight games, and they have improved their record to 16-14 in the process. Houston is suddenly back on top of the Southwest Division, in a first-place tie with the San Antonio Spurs. The Rockets are -3.0 in their road game against the Heat.

The Miami Heat lack true star power on their roster, but head coach Erik Spoelstra has his team playing great on the defensive end of the floor. The Heat are allowing just 107.7 points per game this season, which is the ninth best scoring defense in the NBA. Miami is also one of the best rebounding teams in the league, pulling down 47.5 boards per game. Center Hassan Whiteside is a big reason for these numbers, coming into this game with 13.3 rebounds and 2.9 blocks per contest.

Guard play has really been the story for the Heat offense, which comes into this game averaging 106.8 points per game. Shooting guard Josh Richardson leads the Heat with 18.6 points per game, which is about seven points higher than his career average. Future Hall of Famer Dwayne Wade is providing scoring off of the bench for Miami, pouring in 14.7 points per game. The Heat need more help from their interior players to really turn into a solid offensive team.

The Houston Rockets have a solid top four players, but they aren’t getting much help from the rest of their roster on either end of the floor. Houston comes into this game averaging 109.6 points per game on offense and allowing 109.0 points per game on defense. Shooting guard Eric Gordon has provided solid play off of the bench for Houston, pouring in 15.0 points per game, but has been forced into the starting lineup for much of the season. If the Rockets are going to make a deep playoff run, they need to improve their second unit.

Houston continues to fire up three-point shots in record fashion, taking 55 of them in their record-breaking performance Wednesday night. The Rockets are shooting just 34.5 percent from three-point land this season, another area that needs improvement. James Harden is having another monster season for the Rockets, pouring in a league-high 31.6 points per game. Center Clint Capela is having a career season for Houston, averaging 17.3 points and 11.7 rebounds per game. Houston has the stars that they need; now they just need some supporting players.

The Rockets looked pedestrian for the first month and a half of the regular season, but it appears they are starting to return to form. Houston will look to get their offense going again from the outside in this game, but the Heat can play a little defense. The task for Miami will be finding enough scoring from their inside players to keep this game close. It doesn’t appear that the Heat are capable of that, and the Rockets should roll to their sixth straight win in this game. Bet the Houston Rockets -3.0 over the Miami Heat.