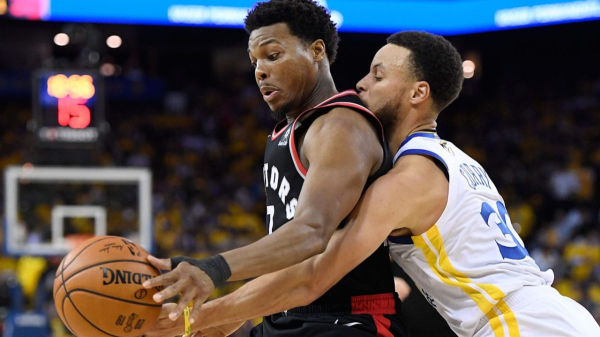 It has really been a worst-case scenario for the Golden State Warriors thus far in this NBA Finals. A 123-109 loss at home in Game 3 has put the Warriors down 2-1 in the series. In that game, they found themselves without Kevin Durant, Klay Thompson, and Kevon Looney. The Warriors received a little bit of good news in the fact that Thompson has been cleared for Game 4, but once again they will be without their star forward as Durant has been ruled out. They are still hopeful he might be ready later in the Finals, but time is starting to run out for them. Game 4 is set to go on Friday with tipoff scheduled for 9 pm ET at Oracle Arena.

In the matchup, the Golden State Warriors come in as 4.5-point favorites playing at home. The over/under for this game is set at 215 points.

Between Stephen Curry, Klay Thompson, Kawhi Leonard, and Kyle Lowry, there is plenty of star power in this series. In the playoffs, Kawhi Leonard has ranked third out of all playoff scorers, averaging 30.9 points, while Curry is averaging 28.5. For reference, the Warriors’ missing player, Kevin Durant, is still leading in points per game with 34.2. Other stat leaders in the playoffs include Draymond Green (fourth in assists per game with 8.1), Kawhi Leonard (first in win shares at 4.3) and Stephen Curry (third in win shares with 3.0).

Warriors Trying To Even Series

After stealing home-court advantage on the road in Game 2, the Warriors gave the advantage right back to the Raptors in Game 3. Still, it is hard to blame Stephen Curry for the loss. In Game 3, he had 47 points on 14 of 31 shooting (including 6 of 14 from beyond the arc) in just over 43 minutes of action. In the playoffs, Curry is averaging 28.5 points on 44.7% shooting. He is also chipping in 6.2 rebounds, 5.6 assists and 1.1 steals per game.

The Warriors do get a huge boost in the return of Klay Thompson on Friday. Thompson, who sat out of Game 3 with a hamstring injury, is averaging 19.5 points on 44% shooting (41.1% from behind the three). He is also chipping in 4 rebounds, 2.1 assists and 1.4 steals per game.

The Raptors stunned the Warriors in Game 3 and are now looking to take a commanding 3-1 lead if they can pull out a victory Friday. This is exactly what the front office hoped for when they traded for Kawhi Leonard in the offseason, and he certainly hasn’t disappointed. In 21 games this postseason, Leonard is averaging 30.9 points on 49.8% shooting. He is also adding nine rebounds, four assists and 1.5 steals per game. In the Game 3 victory, Leonard had 30 points, seven rebounds, and six assists.

Warriors Even It Up

While the absence of Kevin Durant will continue to plague the Warriors in Game 4, getting Klay Thompson back will be huge. Mind you, despite losing by double digits, the Warriors were pesky throughout the game, and it felt like they could have made a run at any point. Now throw Thompson back into the mix and keep in mind that their backs are against the walls in what feels like a do-or-die game, and I think the Warriors come out ahead in this one.

While the Raptors performed admirably in Game 3, they have struggled in the playoffs on the road at times. I see this one being all Golden State from the get-go, and I think they will cover the 4.5-point spread. As a bonus, I also like the over in this one as the 215 feels low to me after they combined for 232 in Game 3.