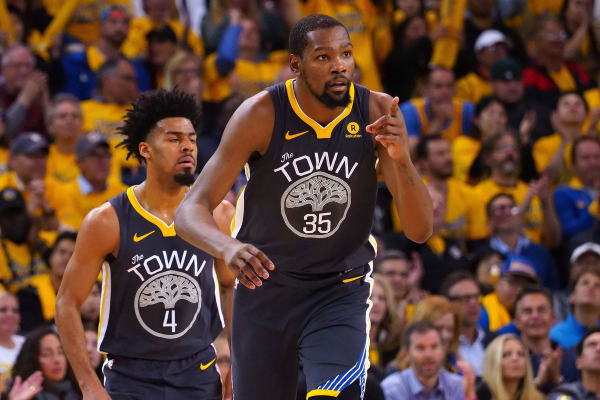 After struggling in the first two games of the NBAFinals, Kevin Durant was the offensive star for the Warriors in game 3. Durant finished with a playoff career high 43 points in the victory, while also grabbing a team high 13 rebounds for the Warriors. The 2017 NBA Finals MVP dominated the Cavaliers in game 3, and now has his team one win away from repeating as champs.

Stephen Curry and Klay Thompson struggled in the game 3 victory, but it did not cost the Warriors the game. Curry and Thompson combined to score just 21 points on just 3-15 shooting from the three point arc. Golden State needs the “Splash Brothers” to get hot from deep to complete the four game sweep of the Cavaliers on Friday night.

LeBron Can’t Do it Alone

LeBron James has been delivering terrific performances for the Cavs throughout the 2018 playoffs, but he has met his match against the Warriors. “King James” finished with yet another triple double against the Warriors in game three, but it was not enough to lead the Cavaliers to victory.

KevinLove has done his best to support James in these Finals, and had another solid game three. Love finished with 20 points and 13 rebounds in the game three loss, and has been delivering double doubles all series long. Tyronn Lue also gave reserve, Rodney Hood, extended minutes in game 3 and he responded with a solid game for the Cavaliers. LeBron will do all he can do to avoid the sweep, but he needs help from his teammates.

The Cleveland Cavaliers surprised many by reaching the NBA Finals, but appear to be completely overmatched against the Warriors. Cleveland has been able to take early leads against Golden State in two of the three games, but doesn’t have the talent to finish them off. LeBron will not let his team get swept easily, and will have another monster performance in game 4.

The Warriors survived a rough shooting night from both Stephen Curry and Klay Thompson in game 3, with Kevin Durant leading the way. Golden State just has too many weapons to lose a game in the 2018 Finals. The Warriors would love to celebrate an NBATitle in the Cavaliers arena, and will get that chance Friday night. Bet the Golden State Warriors -5.0 to win game four and sweep the Cavaliers.