NBA Finals betting: A look back and a look ahead as the Suns lead the Bucks 2-0 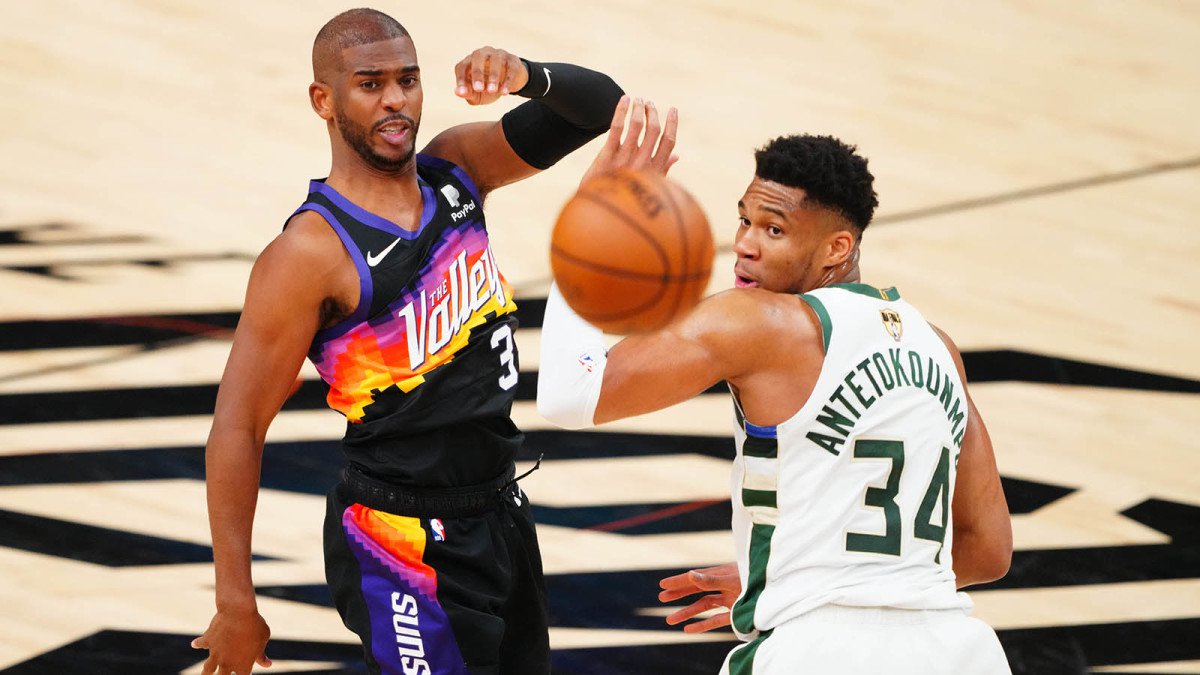 The Phoenix Suns and Milwaukee Bucks played a couple of NBA Finals games in Phoenix that established a seemingly dependable pattern for sports bettors.

Both were comfortable covers for the home team, and both went over the posted total.

The question is whether the trends continue as the series shifts to Milwaukee for Games 3 and 4 on Sunday and Wednesday, respectively, and whether there are series bets or prop bets to be considered as more information becomes available.

A closer examination of the NBA Finals’ first two games:

The Suns certainly passed the eye test, even while facing two-time NBA MVP Giannis Antetokounmpo, who put up 20 points and 17 rebounds as he returned from a nasty-looking knee injury.

The point spread moved from Suns by 6 or 6 ½ to only 4 ½ when Giannis’ status was known.

The first-ever Finals appearance for the Suns’ three top stars showed immediately that the moment was not too big for them.

According to the Elias Sports Bureau, Game 1 was only the fourth time in NBA Finals history that three or more teammates, each in a Finals debut, scored 20 or more in the same game.

In addition to proving their depth is superior to that of Milwaukee’s, the Suns imposed their will – clearly establishing the pace and dictating the tempo. Phoenix set an NBA Finals record for most free-throw attempts without a miss, 25, before Jae Crowder clanked the team’s final attempt of the night.

The performance signaled a concerted team effort and portends a difficult climb for the outmanned Bucks.

While Giannis may be the best player in the Finals, the Suns have the next two, for sure, and maybe three if you like Ayton over Jrue Holiday and Khris Middleton.

Ayton had a cool 22 points and 19 rebounds in Game 1. Booker had 16 points in the first half but, with his 3-point stroke missing (he finished 1-for-7 from long range), he seemed just fine passing the baton to Paul, who became the third player in Suns franchise history to record 30 points or more in a Finals game.

With only a couple of anxious moments for Suns backers holding a minus-4.5 ticket, Phoenix cruised to the cover, winning by 13.

What was the sports-betting takeaway as the time neared to place Game 2 bets?

Antetokounmpo was terrific, and Middleton delivered 29 points in Game 1 – but the Bucks weren’t able to make it over the top.

What would that mean for Game 2, with the same players (except Dario Saric, who tore his ACL in Game 1 and will miss the rest of the series) and a similar outlook?

NBC Sports Edge provided a prediction, leveraging its prediction system – which made a lot of sense after watching Game 1 support the data.

Here was the NBC Sports Edge explanation prior to the second game:

Our current trends analysis sees a decisive edge to the Over for tonight's Game 2. The Phoenix Suns, one of the most profitable teams to bet on in the NBA this season, have demonstrated the ability to run up the score in their last 56 games as a favorite. Meanwhile, in the Milwaukee Bucks' last 59 games against teams from the Western Conference, results tend to be high-scoring with the Over hitting almost 63% of the time.

Sometimes objects in motion tend to stay in motion.

The Suns’ depth, once again, was perhaps the deciding factor.

Giannis was spectacular; Booker, along with Paul and Ayton, did what they consistently have done; and the Bucks’ Holiday and Middleton couldn’t offer enough support.

Mikal Bridges (27 points) was they key depth piece, but he’s a been a borderline foundation piece all season. His court awareness and defensive prowess only add to the depth dominance.

The Suns are 11-1 this postseason when Bridges scores in double figures.

Another major piece in the NBA Finals’ depth puzzle is Crowder, who in Game 2 joined Ayton and Booker for the leadership in plus-minus, recording a +10 on a night he had 11 points and 10 rebounds for his fifth career postseason double-double and his first in a Finals game.

Once more, the Suns had three players Booker (31), Bridges and Chris Paul (23) with 20+ points. During its postseason run, Phoenix is 4-0 when that happens.

With his big night, Paul is averaging 32 points and 8.3 assists per game over the Suns’ past three playoff games.

Booker’s 7-for-12 heat show from 3-point range keyed the Suns’ 20-for-40 domination in long-range shooting (the Bucks made only nine) and, in NBA Finals history, it was only the third time a team has made 20 or more 3s.

Booker became just the 11th player, all time in Finals history, to hit seven or more 3-pointers in a Finals game.

Antetokounmpo, it’s become clear, can’t win the series by himself. In Game 2, he scored a game-high 42 points on 15-of-22 shooting and added a team-high 12 rebounds and three blocked shots.

According to Stathead, Giannis joins three single-name icons (LeBron, Kareem, Shaq) in putting up 40+ points, 10+ rebounds and 3+ blocks in a Finals game.

If he’s not already there, Giannis will soon become worthy of that single-name icon status.

Without significant help from Holiday, Middleton, Brook Lopez, et al, however, he won’t win a title this season.

Trends to consider for Game 3 and beyond

For Sunday night’s game, Milwaukee has been installed as a favorite of 3.5 to 4 points (game total of 221 or 222), with gamblers charged with a decision on how much weight to give the home-court edge.

The oddsmakers believe in the “first home game in a playoff series” hype, but that may offer some value to Phoenix supporters.

The Suns are finding ways to wake themselves up when things aren’t going well. For the second game in a row, they turned up the pressure late in the first half.

While Giannis took 18 free-throw attempts in Game 2, he hit only 11 of them. The Suns have had a better free-throw percentage than their opponent in 14 of the team’s 18 playoff games this postseason.

For a title-contending time, the Bucks aren’t particularly formidable as favorites of four or more points – as they are entering Game 3. In those cases this season, the Bucks are 32-32 against the spread.

Does Milwaukee win one of these two home games, or will the Suns be able to close out the NBA Finals in a sweep?

Tonight, the most pivotal game of the 2022 NBA Eastern Conference finals takes place in Boston, with the Miami Heat taking a 2-1 series lead into their matchup with the Celtics. In Game 3 on Saturday, the Heat took control early, outscoring the Celtics 39-18 in the first quarter and leading by as many as END_OF_DOCUMENT_TOKEN_TO_BE_REPLACED