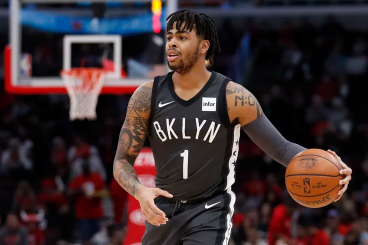 The Brooklyn Nets are in Los Angeles to take on the Lakers and LeBron James. This is a game that has a lot to do with motivation because of the current standing of both of these teams in the NBA. Clearly, the Lakers front office would prefer to lose this game and increase their draft possibilities. With the change in how the NBA lottery works this year to discourage tanking, we will see the Lakers have a real chance for a decent pick in the draft. The Lakers have all the incentive to lose, but I am unsure that the coaching has actually been to lose. The Nets are all but locked into a playoff spot, especially with the way they have been playing recently. They do need to keep their foot on the pedal, especially with the Heat and Magic trailing them and also playing well.

The Nets Are Looking Solid

When these two teams played earlier in the season, the Nets won by 5 at home while the Lakers had three scorers over 22 points. This is not a great sign for the Lakers going into this game because they required 36 points from LeBron in 41 minutes and they also got 23 from Lonzo Ball, who is now out for the season. Kyle Kuzma pitched in with 26 points in 43 minutes, due to their injuries at the time, but even that is a lot to ask for from Kuzma in this game. The bigger issue, in my opinion, is the fact that D’Angelo Russell went for 22 and 13 in this match-up when being primarily guarded by Lonzo, one of the better defenders at the position in basketball, and now he will see Rajon Rondo, who is NOT a good defender. I think D-Lo should be in a fantastic spot this game if he gets the run.

The Lakers have lost 4 straight and 9 of their last 10 while falling into the lottery. This is obviously a result of a lot of injuries and has turned into intentional to some degree. Lonzo Ball has a high ankle sprain and is likely close to good enough to play soon if not now, but he has been ruled out for the season because they want him to stay healthy and make the team worse, which is a win-win at this point. LeBron James was listed out last game due to his groin, but I don’t buy it. I think LeBron may want to kind of play off a lot of struggles due to his injury and even present that it is still bothering him. Also, I doubt that if he couldn’t play last game due to a real injury, he would be playing in this game. It was probably a listing to avoid a fine more than it was about the actual injury.

The Lakers are Struggling

Looking into the Lakers rotations since this downfall has been interesting because I think they are playing to win games from a rotation standpoint. We see both Kyle Kuzma and Rajon Rondo playing upper-30’s in minutes, which is definitely not necessary. The Lakers have a lot of bad players on the bench that could handle some more run. I have no reason for this to change in this game specifically, but I do find it strange that they haven’t held back.

The Nets have looked really good, especially since getting both Caris Levert and Spencer Dinwiddie back. The best part about the Nets recent play is their recent ability to play both Dinwiddie and Russell together. At the beginning of the season, they would just ride the hot hand between these two guys. That’s great and all, but they would rather leave Russell on the bench while Kurucs and Crabbe are on the floor? They have finally given in to getting their best players on the floor at whatever cost, and it makes them very dangerous.

The Nets are favored by -2.5, and I want to say this is a trap because it screams trap. The Nets want to win, and the Lakers want to lose. Only 2.5? This is a terrifying spot where my worries about the Lakers lack of rotational changes makes me want to take the Lakers. The thing is, they have been bad even with playing all of these guys. I like the Nets here -2.5.